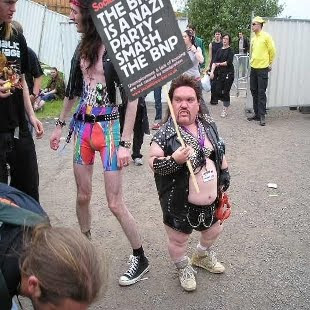 " Please dont tell Denise Garfield I am here, she abuses me sexually "


" No, I really am Ketlans afterbirth "


" So we told Snow White she can fuck right off. We aint hi hoing for no honky ho no mo "

" I asked Ketlan if he liked tossing dwarves at a nightclub in Soho and we have been married a year now. Matt Lucas is my best mate dontcha know, dontcha know, what, what "


" Keep that fucking police dog away from me, the bastard just tried to hump my right ear "


" I hate the fucking countryside. I got mugged by a weasel on the way here "


" Coat me in hony and throw me to the homosexuals "


" Is you looking at my mullet fool. I aint kidding as I will fuck you up "


" The head of the policing operation at the RWB said, " Yes were a bit surprised to be honest by the amount of violence committed by the dwarves, so next year we will bring some miniature ponies to the festival in order to keep the little fuckers under control. One of my officers was beaten quite severely around the ankles with a UAF placard by one of them and we have three dwarves in custody for the attack.

We did have four in custody but one slipped out the handcuffs, jumped out the back of the van and fled into the tall grass where we couldnt see him.

We believe he then stole a sheep from a neighbouring paddock and rode away on its back. TSRA (Taking a Sheep and Riding Away) is a serious crime often linked to dwarves, but to be honest we have been working with the dwarf community and such crimes have been dropping in the vicinity until now.

We now have him cornered in a rabbit warren but he is nasty little bastard who is throwing rocks at us and screaming about ' Pixie rights ' or some shit. We have a vet on the way though with a tranquiliser gun to get the little fucker. We will get him dont worry about that. This time he aint gonna slip between our knees and run away again "

Posted by Defender of Liberty at 00:43

I tell you what, that's about the funniest article and picture I have ever read online.

That picture appears below with a great title to go with it.