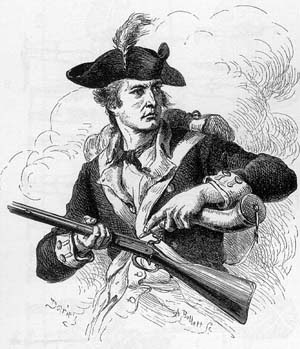 Thomas Jefferson, who was serving as an ambassador to France at the time, refused to be alarmed by Shays' Rebellion. In a letter to a friend, he wrote that "a little rebellion now and then is a good thing. The tree of liberty must be refreshed from time to time with the blood of patriots and tyrants."


I have only recently become aware of Daniel Shays and the Shays Rebellion.

Now this is what I call a Nationalist and a Patriot.

When America is once again ruled by patriots and nationalists, instead of globalists and traitors, then statues of Daniel Shay should be erected all across the country.

The Daniel Shays Medal should be awarded to all American Nationalists and Patriots who each year have distinguished themselves in the struggle for American liberty and democracy.


Shays' Rebellion was an armed uprising in Central and Western Massachusetts, (mainly Springfield) from 1786 to 1787. The rebellion is named after Daniel Shays, a veteran of the American Revolution who led the rebels, known as "Shaysites" or "Regulators". Most of Shays' compatriots were poor farmers angered by what they felt to be crushing debt and taxes. Failure to repay such debts often resulted in imprisonment in debtor's prisons or the claiming of property by the County.

Seeking debt relief through the issuance of paper currency and lower taxes, they attempted to prevent the courts from seizing property from indebted farmers by forcing the closure of courts in western Massachusetts. The participants in Shays' Rebellion believed they were acting in the spirit of the Revolution and modeled their tactics after the crowd activities of the 1760s and 1770s, using "liberty poles" and "liberty trees" to symbolize their cause.[1]

The rebellion started on August 29, 1786 and by January 1787, over 1000 Shaysites were arrested. A militia that had been raised as a private army defeated an attack on the federal Springfield Armory by the main Shaysite force on February 3, 1787. There was a lack of an institutional response to the uprising, which energized calls to reevaluate the Articles of Confederation and gave strong impetus to the Philadelphia Convention which began in May 17, 1787. Shay’s Rebellion produced fears that the Revolution’s democratic impulse had "gotten out of hand."[

Posted by Defender of Liberty at 10:58