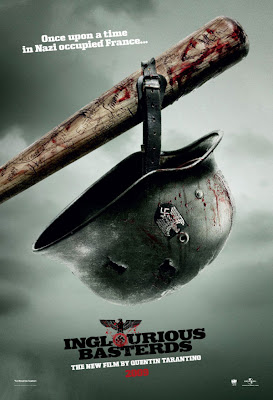 Hollywood is run, owned and controlled primarily by Jews.

Those who deny this are the same sort of people who support the genocide of the Palestinians by the Zionists that control Israel.

Most of the films produced by Hollywood are simply symptoms of the mental illness of those that produce them or are propaganda as part a conspiracy to undermine Western Civilisation.

Only one film bas been banned for being too extreme in recent years - a Japanese one.

British politicians do not ever bite the hidden hand that feeds them.

Over the last year or so, there have been countless movies about the Nazis and the Holocaust, such as the “The Reader,” “Valkyrie,” “Defiance” and “The Boy in the Striped Pajamas.” A popular new film, the "Inglorious Basterds" directed by Quentin Tarantino and produced by the Weinstein brothers is promoted by Hollywood and the press as a fictional tale of a group of Jewish American GI's led by a redneck Lieutenant played by Brad Pitt, who seek vengence against the Nazi's in occupied France during WWII. Throughout the film there are many gruesome scenes of vengence, including scalpings and torture.

Eli Roth, who plays a leading role in the film as the "Bear Jew", says that the idea of vengence is "...almost a deep sexual satisfaction of wanting to beat Nazis to death, an orgasmic feeling. My character gets to beat Nazis to death. That’s something I could watch all day. My parents are very strong about Holocaust education.” On a similar note, one of the films producers, Lawrence Bender told Tarantino that “As your producing partner, I thank you, and as a member of the Jewish tribe, I thank you, motherf--ker, because this movie is a f--king Jewish wet dream.”

In the ADL Statement they say that the film "...is an allegory about good and evil and the no-holds barred efforts to defeat the evil personified by Hitler, his henchmen, and his Nazi regime. If only it were true!"

There is no need to come up with a fictional story while there is a true chapter of WWII history most people have no clue about. A Jewish American Author named John Sack risked his career and even his life to tell the story of Jews who sought revenge in his controversial book An Eye for an Eye: The Untold Story of Jewish Revenge Against Germans in 1945. The story tells of Jews who oversaw prison camps in Poland under the Communist occupations. According to Sack, they not only sought revenge against German soldiers, but also innocent German and Polish civilians.

Sack states in his book that the revenge included torture and rape of women and children. Sack estimates 60-80,000 died in these camps. Sack interviewed one survivor named Lola, who was an official at the prison and lost most of her family in the Holocaust. She admited that they treated the prisoners much worse than she was treated at Auschwitz by the Nazis. Sack said "Lola at Auschwitz wasn't locked in a room night and day. She wasn't tortured night after night." She told Sack: "Thank God, nobody tried to rape us. The Germans weren't allowed to." But all of that happened to German girls at Lola's prison in Gleiwitz"

Solomon Morel who lost most of his family in the holocaust brutally oversaw the prison camp. Morel fled to Israel after the book was published. Israel has refused to extradite Morel to Poland to face war crimes.

Most major publishers refused to publish Sack's book and major media outlets ignored it once it was published. John Sack was villified by the Jewish Establishment, such as the Executive Director of the World Jewish Congress. He was labeled a self-hating Jew and even an anti-semite. Self Proclaimed fighter of Holocaust Denial, Deborah Lipstadt, stated, on "the Charlie Rose Show" that Sack was a Neo-Nazi and anti-semite and told him personally he was worse than a holocaust denier, despite the fact that he shares the mainstream view of the holocaust.

The media and major Jewish organizations were opposed to the book because they percieved it as portraying Jews in a negative light, possibly stirring up anti-semitism and weakening their power to exploit the tragedies commited by the Nazi's for their own political agenda. However these same organizations are promoting Tarantino's fictional film.

Sack's message from his book was not to promote hatred against Jews. Instead, the books purpose was to prove that Jews are no different from any other group of people who have suffered from persecution but aren't immune from committing autrocities against others.

Behind an Eye for An Eye: Revenge, Hate and History by John Sack

Posted by Defender of Liberty at 01:47

'Hollywood is run, owned and controlled primarily by Jews.'


just to see the output of general Film & TV and the way that Europeans are represented give the sick, sickening clue to this 'eternal revenge'