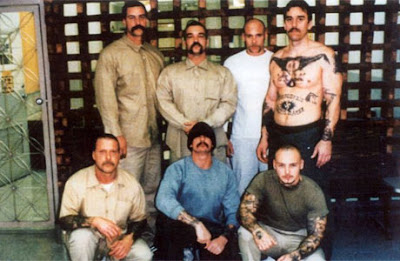 The Daily Mail yet again distorts reality to suit its own pitiful liberal agenda.

In todays Mail they print an article about a prison riot in California where a prison was trashed and hundreds injured - link here ;


Note how the article gives the impression that it was nasty white men that were attacking those poor ethnic people in prison.

Yet read the New York Times article about the same riot here ;

Note the statement, " The 11-hour riot, at the Reception Center West at the California Institution for Men in Chino, about 40 miles east of Los Angeles, broke down along racial lines, with black prison gangs fighting Latino gangs in hand-to-hand combat, the authorities said. "

It doesnt state that in the Daily Mail does it.

Plenty of trite sentences about the damage to the prison, but no mention of the race of rioters in that 'race riot', which strikes one as odd doesnt it - as one would have thought that a story about a race riot would have neccesitated a mention, albeit fleetingly, to the race of the racist rioters involved in the race riot.

This is because the Daily Mail, like all newspapers and especially the BBC, like to only print stories which mention of the race of white criminals and suspects, and the entire media like to hide the identity of non-whites involvement in crminality unless they are in position where it is so obvious they cannot hide it any more.

This is also why the media constantly highlight and attack White prison gangs in the US like the Aryan Brotherhood and the Nazi Low Riders.

I wrote a while about the subject of male prison rape against whites by blacks in US prisons and how this led the rape victim John King to target and kill James Byrd, an innocent black man he targeted after coming out of prison and having no medical or psychiatric care to help him deal with his trauma after being repeatedly raped by racist blacks in prison.


The fact is that groups like the Aryan Brotherhood are the only people defending whites in prisons.

The prison authorities are too scared to be called racist in case they address the issue of the rape of white prisoners by blacks - and the government doesnt want to deal with it as the costs of court cases, health care and post-rape counselling would be hundreds of millions of dollars a year.

Therefore they allow it go on - and therefore whites formed prison gangs to defend themselves.

Groups like the Aryan Brotherhood are not criminal gangs, though they are comprised of prisoners, they are self defence organisations to defend whites from the most brutal crime, bar murder, that a male can experience.

The Aryan Brotherhood are in fact one of the few organisations that can be said to be truly heroic, for they put themselves on the line day after day in order to protect a persecuted, raped and abused minority group in US prisons - that minority group being whites.

Until the issue of racist black rape against whites in prisons is dealt with then the white prison gangs are essential self defence units for the preservation of the lives of white prisoners.

One can only hope that one day the people in Hollywood who like to make jokes about male rape in prison and the white liberals that fetishise ethnic minority suffering in society, but who both completely ignore the suffering of whites who are the ethnic minority in US prisons, are forced to experience the racial 'enrichment' of US prisons.

A white liberal is a product only of ignorance and self delusion - put a white liberal in a US prison and they simply become meat for racist black gangs to rape and abuse.

There will be no mercy for the white liberal as they are being raped and crying out 'But I am a member of the UAF and I love rap music' cause that aint gonna stop them being raped.

White liberals are simply those who have never had any real experience of the real world, they are mainly middle class idiots cushioned by their wealth - but the moment they are forced to live in the real world of the US prison system then the first thing they do is go looking for the Aryan Brotherhood to take care of them.

After being raped a few times just because they are white, the scales of liberal delusion usually fall from their eyes.


As one person commented about the riot, and the Chino legal case that caused the violence by forcing prisons to integrate racial groups in prison ;

" "Yea, great idea lets put the black panthers, the KKK and the Mexican Mafia all together. Maybe we can also put the Jews, Palestinians, and Muslims all together in the same city. Leave it to the very optimistic government to come up with brilliant ideas!"

The same can be said about multi-culturalism itself.


Whilst witless white liberals and black race relations profiteers seek to exploit slavery from hundreds of years ago - the sexual slavery of whites in prison is forgotten and ignored.

As the testimony of these white rape victims reveals - whites are made into slaves ;

“I had no choice but to submit to being Inmate B’s prison wife. Out of fear for my life, I submitted to sucking his dick, being fucked in my ass, and performing other duties as a woman, such as making his bed. In all reality, I was his slave … . I determined I’d be better off to willingly have sex with one person, than I would be to face violence and rape by multiple people. The most tragic part to this is that the person I chose to ‘be with’ has AIDS.”

…“I’ve been sentenced for a D.U.I. offense. My 3rd one. I’m a tall white male, who unfortunately has a small amount of feminine characteristics. And very shy. These characteristics have got me raped so many times I have no more feelings physically. I have been raped by up to 5 black men at a time. . . . I probably have AIDS now. I have great difficulty raising food to my mouth from shaking after nightmares or thinking so hard on all this… . I’ve laid down without a physical fight to be sodomized. To prevent so much damage in struggles, ripping and tearing. Though in not fighting, it caused my heart and spirit to be raped as well. Something I don’t know if I’ll ever forgive myself for.”

“[Another prisoner] claimed me as his property and I didn’t dispute it. I became obedient, telling myself at least I was surviving … . He publicly humiliated and degraded me, making sure all the inmates and guards knew that I was a queen and his property. Within a week he was pimping me out to other inmates at $3.00 a man. This state of existence continued for two months until he sold me for $25.00 to another black male who purchased me to be his wife.”

…“You will clean the house, he said, have my clothes clean, and when I’m ready to get my ‘freak’ [sex] no arguments or there will be a punishment! I will, he said, let my homeboys have you or I’ll just sale you off. Do we have an understanding? With fear, misery, and confusion inside me . . . I said yes.”

More info on the rape of whites in prisons here ;

Posted by Defender of Liberty at 06:53

I have just left a comment with the Daily Mail

Your blog is my fav by a long way, lots of intellectual thought provoking material that deals with lifes realities and not the lies that provides the sheeple with the BBC blanky they need in order to hide from the disturbing truth all around them, they cling to the blanky for dear life, the NWO must be dissmissed as a joke and the people sounding the warning as `nutters`. The Europeans being ethnically cleansed from their homelands must be met with the scream fed them through the BBC - racist! yep snuggle up in the BBC blanky folks.

Unfortuantely the blanky is being replaced by tyrany and it's now heading your way, unfortunately you had your head under the blanky for so long that now you are powerless to stop it.

Those guys look scary but that's not the point. This is a perfect example of the saying, "one man's terrorist is another man's freedom fighter."

they are truly scary - they are dangerous men, but the system made them that way.

The story of the white kids who go through this are heartbreaking, and to be honest I cannot understand why the black guys can do it.

There are some things as men we cannot do to other men - we can kill them in war, but heterosexual men raping a boy just because he is white - that is truly beyond me,

There are some things as men we cannot do to other men - we can kill them in war, but heterosexual men raping a boy just because he is white - that is truly beyond me,

I hate to read about rape since it is such a horrible crime.

On the other hand, I think that most men in prison engage in homosexual acts...may not necessarily be rape, but homosexuality nonetheless. I think it's true for all races.

I can just about understand them getting into some consentual sex if they had been banged up for a few years and they were young blokes, but raping a man.

I can't understand it for men or women but I must admit that if it must happen, it should only be between two consenting adults.

That's a drink driving offense, he must've had a lousy attorney.
But joking aside I've never understood why in this country vulnerable non streetwise kids are thrown into gang infested federal and county jails, for minor crimes such as drink driving.

The US claims to be a Christian nation but treats our citizens like cattle.

But those prison rape links are truly the stuff of nightmares. I've visited many jails, as a visitor, in the US and they are really bad, claustrophobic, gangs, even looks from the prisoners really strikes fear in your heart. To go to one of these places for a minor offense such as drink driving i'd rather flee to Mexico as I knew that in jail i'd end up spending the rest of my life there for murdering a potential rapist.