The BNP saved England and the English Flag 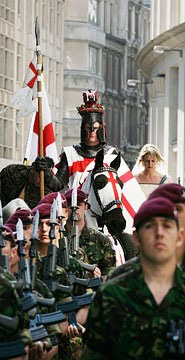 I just love it when people say 'we have to reclaim the English flag from the right wing'.

This is because if it wasnt for the 'right wing' which is code speak for the BNP, then the flag of England would be in the dustbin of history right now.

Year after year we see more and more liberals, the police and councils banning and arresting people for using or waving the English flag.

The ONLY reason the English flag still flies in England is because the BNP have rescued it from the liberals.

The liberals have sought to dump the English flag, by stealth and by threats of racism, and it worked.

As a kid I do not remember seeing the English flag anywhere - now its everywhere.

Now the liberals say they want to 'reclaim' it from the far right - but they do so not to honour it, because they despise England, the English and English nationalism, but because they know that the English people want their flags back.

Therefore the Liberals have to allow people to wave the flag and have St. Georges Day marches etc and parades as without them then only the BNP are waving the flag.

English Nationalists should get down on their knees and thank the BNP.

If it wasnt for the BNP rescuing the Cross of St. George and the BNP celebrating St. Georges Day - then there would be no English flag flying anywhere and no marches or parades.

The marches and parades such as the one below have been established in order to try and undermine the link between the BNP and the English flag, as they admit themselves time after time in interviews, so in the end the only reason why England still lives and the English flag still flies is because of the BNP.

If it wasnt for us then our indigenous culture would be dead - by us rescuing it and defending our national cultures this forces the liberals to organise parades such as the one below - but as they admit not to celebrate England, the English or English nationalism - but simply to fight the BNP.

Whilst we get the flak, England gets its flag back.

Thats good for me.


The revival of a St George’s Day parade through the City of London for the first time in four centuries was a vision of traditional Englishness. There was a man dressed as St George with a papier-maché dragon on his helmet, a marching band, a lamb and an all-terrain vehicle designed by an Austrian arms company that made guns for the Third Reich.

The Pinzgauer truck, which originated in Austria but is now made in England, was invited to take up the rear of the procession by the Worshipful Company of Armourers & Brasiers, a City guild that last performed such a parade in 1585.

It also enlisted the help of the Band of The Parachute Regiment, the Regimental Colour Party and Pegasus, a Shetland pony that serves as a regimental mascot.

The civilian contingent included a professional jouster dressed as St George mounted on a horse, some knights and a lamb in a crib on wheels.
Related Links

* Other land of St George not for faint-hearted

* The Union Jack: 400 years and no sign of flagging

The lamb, which plays a symbolic part in the legend, proved to be the main draw for the crowds who turned out to see the parade. There was a tussle over its name. Christopher Waite, clerk of the company, said that she was called “Annie”, because she was an orphan. Karen Archer, 27, who portrayed the maiden apocryphally saved by St George, said that they had privately renamed her “Mint Sauce”.

The lamb was due to be sent to slaughter in three months, but the Wiltshire landowner who owns her told The Times that he had decided to grant her a reprieve. George Windsor Clive, a chartered surveyor who specialises in selling stables, said: “She has been saved by the parade. We thought, ‘We can’t send her for the chop’, so we’re going to breed from her instead. We get five orphan lambs every year and we normally keep them till they’re ready to eat, but she will survive.”

Elizabeth Martin, who will return the lamb to its owner, said that it was an ordeal finding an appropriate lamb because it has to be authorised for movement.

It also caused havoc in Armourers Hall. “It has been running around and peeing all over the place,” she said.

Tom Tudor-Pole, a freeman of the Armourer’s Company and regimental jeweller for The Parachute Regiment, said that he organised the parade to reclaim England’s patron saint for ordinary English people.

“St George has been hijacked by the right wing,” he said. “I wanted to bring him back because he’s the patron saint of our Armed Forces and many other countries.“Next year we hope that all regiments will have similar events around the country to raise money for charity.”

Mr Tudor-Pole also constructed the mobile crib that carried the lamb. “It’s made of English oak with copper bars and a silver plaque to St George. We call it the lamb-bourghini.”

The procession travelled in a circular route from Armourer’s Hall in Coleman Street via St Paul’s Cathedral, where Company members traditionally paid tribute to a statue of St George. The statue no longer exists.

The English legend of St George is wildly divergent from an older story about a Christian soldier in the Roman army who was tortured and killed for refusing to renounce his faith.

One version of the English myth is that a dragon terrorises a kingdom and is appeased only as long as the people feed it their sheep. When the last sheep is eaten, the people send their children, chosen by lot. When it falls upon the Princess to be sacrificed, St George happens to be passing and mortally wounds the dragon. He then offers to kill the dragon if the kingdom converts to Christianity. The subjects find faith, and everyone but the dragon lives happily ever after.

hey Lee, check this 911 you tube if you are still unconvinced it was a US inside job. This debunks a propaganda film made 6 years after. You might like to google some of the names of the people mentioned like dennis Wooldridge or the Irish architect Ronald Clifford. None have an existence outside this 9/11 production. If I do a google search on any architect or author it will come up with hundreds of references from their address to their work. Odd eh? the only exception is the government lawyer . It is possible to google a lawyer of the same name yet in his long description of various government posts and interesting career fails to mention he was in hotel 9/11

Here is that video.