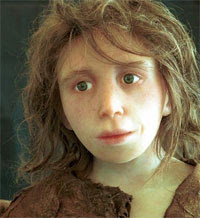 I made a mistake a few days ago.

I read a Daily Mail article and did not bother, due to being busy, reading the original report.

In the article I wrote on the new DNA evidence that showed human and neanderthals bred I used the Daily Mail article as the basis of my thesis here ;


But the Daily Mail put in a single, but very important, lie in their report.

Here is the lie ;

" The two events happened after our ancestors migrated out of Africa to colonise the rest of the world. The researchers found evidence of interbreeding between Neanderthals and modern Africans - supporting the theory."

Here is what the report actually says ;

" Using projected rates of genetic mutation and data from the fossil record, the researchers suggest that the interbreeding happened about 60,000 years ago in the eastern Mediterranean and, more recently, about 45,000 years ago in eastern Asia. Those two events happened after the first H. sapiens had migrated out of Africa, says Long. His group didn't find evidence of interbreeding in the genomes of the modern African people included in the study. "


So the Daily Mail printed lies, a lie in direct contradiction to what the DNA evidence says - which is that whilst Modern Europeans share archaic Neanderthal DNA along with Eastern Asian people, Modern African populations DO NOT share any DNA with Neanderthals.

Therefore we now see that Modern Africans are an archaic Homo Sapiens species, whilst Modern Europeans who descended from Cro-Magnons are a fusion of Homo Sapiens and Neanderthals and are a separate human species.

What we call RACE is in fact the beginning of a SPECIATION.

The racial differences between White Europeans, East Asians and Africans relates exactly to the presence of Neanderthal DNA in the phenotypes of those racial groups.

Cro-Magnons, the descendants of the first interbreeding around 60,000 years ago are Modern White Europeans.

East Asians are the descendants of the second interbreeding around 45,000 years ago.

Modern Africans are the descendants of the original Homo Sapiens population.

Therefore to be exact Modern White Europeans should be defined as Cro-Magnons - Homo Sapiens / Neanderthal Hybrids, not as Homo Sapiens.

We are in fact three distinct human species.


It appears that the Multi-Regional Theory is correct.

There is not one human species - there are three.

The entire liberal myth on us all being the same is a lie.

The entire history of humanity has to be re-written.

Everything you have been told is a lie.

No wonder the Daily Mail lied.

Posted by Defender of Liberty at 11:44

The Daily Mail is going overtime in its propaganda department at the moment and is as blatant as the Mirror. Interestingly it has hundreds of internet commentators who tend to be of a conservative view point. You can always tell the sensitive reports for which there is a blanket ban from the newspaper for comments to be added to the story.; the two main ones are "the Holocaust" and the events of 9/11. It usally has a story most days of how some plucky British tommie sneaked into Auschwitz and saw it all with his own eyes or how Adolf is the inspiration to those who wish to see Israel bought to heel.
There is only one time when they allowed comments to be added to a 911 story and you can do a search of the Daily Mail and find it. It was probably a mistake and the censor was on a lunch break. Interestingly it showed over 2000 green arrows of approval to the suggestion that 911 was an inside job.

Isn't there a national census coming up in 2011, Mr Barnes? Will you be putting down that you're a Cro-magnon? We could all put our unique individuality onto the census forms. Could be fun!

The easiest way to understand it is just like this, there are Orangutans, Gorillas, chimps and Baboons; all Monkeys but with entirely different looks, abilities and all with no exception are hostile to other races "NATURE"

Shall we make them breed together to stop them fighting and disagreeing with eachother ;o)

It is my strong beleif that nature works to preserve the fittest; look at Africa being subsatuted in every single way by the Western Nations, I dont to to expand on this do I ..natural selection..

Anonymous is lying in his comments above. There are no "blanket ban" for stories on 9/11 and internt comments.

I checked and the first two all ahd plenty of comments from people, some of them opposing the official line.

If you don't check the sources and confront these peddlars of lies then you end up with distorted truth and more lies.

Don't believe what you read or are told, especially by cranks on the internet.

Lee good post and interesting science, only lets get our heads around this ground breaking stuff.

If Africans are homo-sapien archaic, then fair does they have retained a racial purity and I respect that.

This is probably to pave the way for the suggestion that the British and Western Europeans should marry migrants.

Sarko has already suggested it to the French.

anonymous at 14.20 must have been alerted by his computer that there was a post on the internet somewhere which queried the official line on 9/11. Rather like the ADL financed Hasbara which activates its tribe if there is any questioning of the 6 million gas chamber victims on the internet. It must be so annoying to those in power but until the first amendment is repealed they have to fight threats to their complete dominance spread by the internet.
If you check 9/11 stories in the mail you will find 10 or 15 comments allowed; now most stories get 2 or 3 hundred. Most are of the hanging is too good for Osama variety.Rarely some of the stories have allowed hundreds of comments but that is an oversight of the Mail and you can see the general pattern for yourself.
I would also point out that anon uses ad Hominen attacks ie calling the thousands of people who doubt the official version of 9/11 " cranks". Ineterestingly if you did a public opinion survey you would probably find a majority who realise the official version is bullshit.