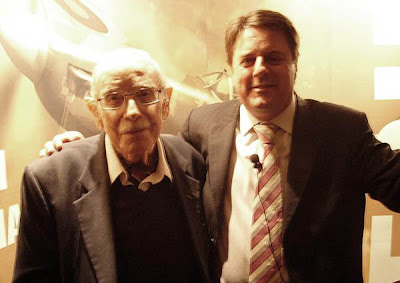 
I used to e mail Douglas a lot a few years ago on the interest we both shared on Gnostic Christianity. He was an intelligent, erudite and charming man.

In tribute to Douglas I present one of my favourite poems High Flight by John Magee, a fellow pilot in the RAF who died during the war.

This poem is beautiful, and just like Wilfred Owen in the First World War, we lost so many beautiful poems they could have given us.

Oh! I have slipped the surly bonds of earth
And danced the skies on laughter-silvered wings;
Sunward I've climbed, and joined the tumbling mirth
Of sun-split clouds - and done a hundred things
You have not dreamed of - wheeled and soared and swung
High in the sunlit silence. Hov'ring there
I've chased the shouting wind along, and flung
My eager craft through footless halls of air.
Up, up the long delirious, burning blue,
I've topped the windswept heights with easy grace
Where never lark, or even eagle flew -
And, while with silent lifting mind I've trod
The high untresspassed sanctity of space,
Put out my hand and touched the face of God.

They dont make em like they used to.
Good Night and God Bless Douglas Tidy.