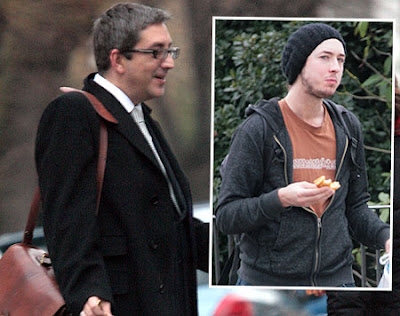 Anyone who is willing to buy flesh for sex, will sell our people out for cash.

Those who use the sex trade will sell our nation out in a moment.

The fact that this degenerate whore monger is not even elected yet shows us what the New Tories really are - a bunch of degenerates whose politics is defined by their sexuality and their contempt for a decent society.


A leading Tory faced embarrassment last night after admitting he lent £250 to a student he met online... who we can reveal is a RENT BOY.

Would-be MP Richard Merrin, 43, struck up a friendship with 6ft 6in Matt Thompson, who brazenly lists fees for gay sex acts on a website.

The Sunday Mirror can reveal Mr Merrin wrote a personal cheque for £250 towards council tax bill arrears for a dingy, one-bedroom South London flat where the student had lived.

The politician also gave Thompson his 16-digit bank card number and expiry date to make sure the cheque would be accepted.

Mr Merrin said a political rival wanted to attack him because "I am vulnerable and I'm gay".

Posted by Defender of Liberty at 06:12

and this is the level the bbc pedal

So that's how the UAF get their funding eh.

Put that in front of 50million Brits year after year and you don't report the news, you end up creating it.

It becomes our self image, this stuff should be reported but on the back pages.
Notice how almost all the articles are psychologically negative and culturally demoralising.
The news is a weapon, and who controls the news.