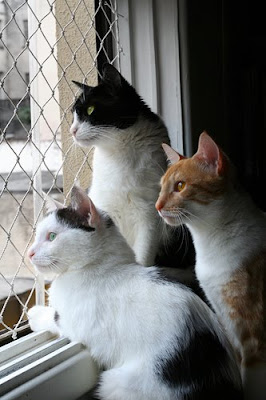 Image - David T, Edmund Standing and Maurice Cousins, or The Three Pussy's as they are known, looking out at the real world from inside the sealed bubble of the Harrys Place office. With the free speech window firmly closed on the comments section of Harrys Place, in order to ensure no-one mocks them and the pompous drivel and war propaganda they peddle on the site to their tiny clique of insane Zionist warmongers, cross dressers, lunatics and swivel eyed anti-BNP haters, the Three Pussy's finally feel like real journalists and academics.


Once upon a time there was a website called Harrys Place.

Harrys Place used to have a sign on the site saying it valued free speech.

Then because people kept posting comments on the site ripping the piss out of the pompous arse David T (One of Britains most prominent Jews - dontch know, what, what) who runs the site and his lickspittle lackeys Edmund Standing of the Centre for Social Cohesion (A Neo-Conservative Zionist Thinktank) and Maurice Cousins of Nothing British About the BNP (A Zionist Tory front group) they stopped allowing people to post comments on the site.

It appears that free speech is good for the Harrys Place idiots only if you say what they want you to say - such as peddling war propaganda to attack Iraq or Iran for their Zionist paymasters.

Stalin and Mao would be so proud.

Posted by Defender of Liberty at 02:34

now we wouldn't need that, indeed have in the distance past never needed such an organisation , but as a result of the planned mass colonisation , planned by the like of Torys labour and the NWO Marxists, such an unnatural plan need the 'cohesion police' to try to keep their racist / multiculturalist /anti white attack upon British culture and people in place

Well I won't bother posting this at Harry's Place.