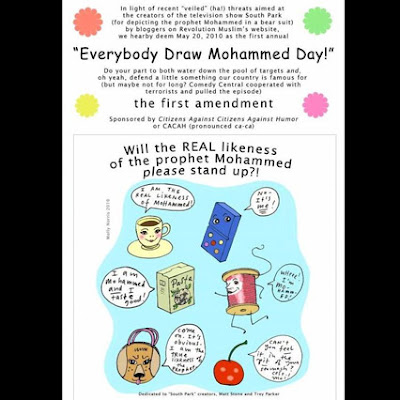 Censorship of a South Park episode after Muslim threats has led to calls for an Everybody Draw Mohammed Day
By Tim Edwards
LAST UPDATED 2:47 PM, APRIL 26, 2010
Share

A Seattle cartoonist's joke about the censoring of a South Park episode about the Muslim prophet Mohammed has taken on a life of its own. It seems that nothing can now stop May 20 2010 becoming the inaugural 'Everybody Draw Mohammed Day'. Even if, in an ironic twist, its biggest backers have now been scared off.

As reported on The First Post last week, the 201st episode of South Park was censored by its own production company, Comedy Central, after its creators, Trey Parker and Matt Stone, depicted Mohammed for a second week in a row.

The epilogue, normally the slot where one of the central characters talks about what they have learned in the episode, was bleeped out entirely. The monologue was apparently about intimidation and fear and did not even mention Mohammed.

Comedy Central, it transpired, were less gung-ho about offending Muslims than Parker and Stone, who for their 200th episode the week before had drawn Mohammed wearing a bear suit. The depiction provoked a none-too-subtle threat from a US website, RevolutionMuslim.com, which suggested Parker and Stone might suffer the grisly fate of Theo van Gogh, a Dutch film director who was shot dead and nearly decapitated after offending Muslims.

Molly Norris, a Seattle cartoonist, drew her cartoon (above) in the style of a poster by the non-existent group 'Citizens Against Citizens Against Humor or CACAH (pronounced ca-ca)'.

The 'poster' declares May 20 Everybody Draw Mohammed Day, urging participants to "water down the pool of targets" for Muslim extremists.
In an interview with Seattle radio station KIRO, Norris said it was the cartoonist's job to be non-PC. "As a cartoonist I just felt so much passion about what had happened I wanted to kind of counter Comedy Central's message they sent about feeling afraid."

Wellington, who must surely be new to the internet, wrote: "I am aghast that so many people are posting deeply offensive pictures of the Prophet. Y'all go ahead if that's your bag, but count me out. And I encourage you all to make some Muslim friends - those of you who clearly have never met a Muslim. Yeesh."

Norris herself has been was taken aback by the huge response her pitch for free speech enjoyed. Admitting to a twinge of fear, she left a statement on her website distancing herself from the now-unstoppable event.

"I did not intend for my cartoon to go viral. I did not intend to be the focus of any 'group'. This particular cartoon has struck a gigantic nerve, something I was totally unprepared for."

In a second cartoon, Norris drew herself under a number of sentiments, including: "I am a coward, I have backed off of being associated with any group or cause."

So where now for Everybody Draw Mohammed Day? Maybe the only public figures brave enough to associate themselves with this campaign are Trey Parker and Matt Stone.

Posted by Defender of Liberty at 07:05

Things are not as they appear to be my Murdoch media:

"The founder of the group goes by the name of Yousef al-Khattab, but his real name is Joseph Cohen. He was born and raised in the United States as a Jew, ..."
http://www.loonwatch.com/2010/04/south-park-controversy/