Katyn and the true face of Communism 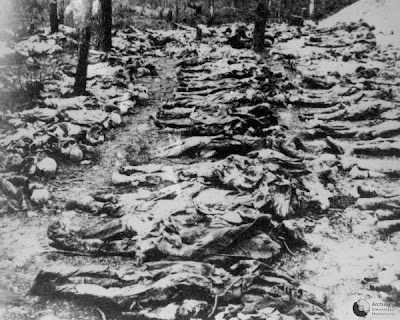 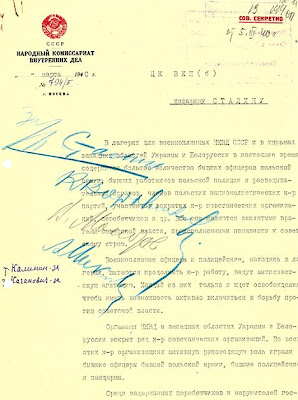 Image - the death warrant signed by Stalin for 22,000 Polish officers and nationalists.

President Dmitry Medvedev released the material in the latest of a flurry of gestures of solidarity with Warsaw since Polish President Lech Kaczynski, his wife and 94 officials were killed in a plane crash en route to a ceremony commemorating the Katyn massacre.

The move also reflects a new willingness by Moscow to accept responsibility for one of the most shameful episodes of the bloody Stalin era.

Sleep now, all you restless ghosts,
For the truth is finally set free,
From its ark of earth and silence,
And the love of the Lord of Hosts,
Crowns with his garlands of glory,
The heroes lost to evils violence.

Posted by Defender of Liberty at 09:30

Thanks for this one Lee.
I have posted it on http://swindonnationalists.blogspot.com/
People need to know what communism really is!
RS

I agree entirely, people need to know what it is, only the educated have an idea , im talking of political activists like you and I!

Nice to see a comment from you on Lee's Blogg, I hope you and "P" are doing ok, ill see you both at the RWB this year

We are doing fine Tim and Sarah, thank you.I look forward to seeing you at this years RWB, I will be sober this time :-)P has been walking his feet off leafleting, and I will be helping out with them later on today,
All the best,
Red Squirrel x