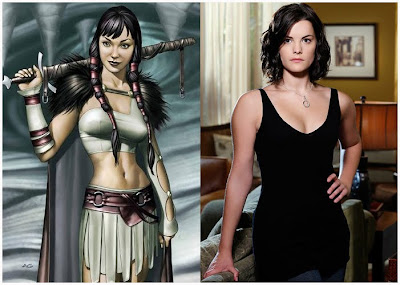 Image - Sif (the sister of Heimdall in the comic) and the actress who will play her. Errr, not much of a family resemblance is there. 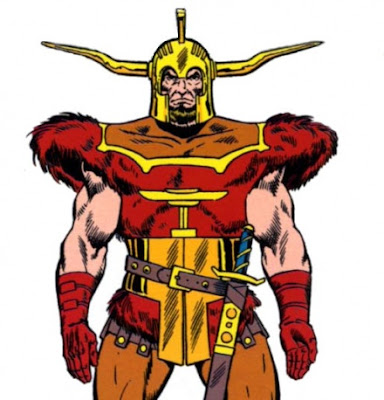 Image - Heimdall in the Thor comic. Not very black is he. 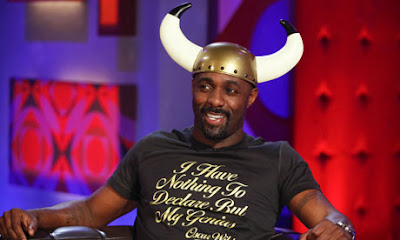 Would they get a white actor to play a black king in the movie version of The Lion King ?

Would they get a white actor to play a black part in Porgie and Bess ?

Would they get a white actor to play a black part in an film based on ancestral African myths ?

No - of course they wouldnt.

But hey, its okay to cast a black actor in the role of Heimdall in the film of Thor.

Frankly Idris Elba should be embarrassed for accepting the part.

Everyone knows he only got the role because of some perverted wish of Kenneth Brannagh to appear Politically Correct and throw in a black face into an movie about Nordic myths.

To be frank he should feel a total prick.

This sort of overt PC casting makes normal people cringe and sets back race relations - as people just say to themselves ' Oh look another token black in a movie, makes a change dont it'.

The fact that a few black actors go along with this patrionising drivel by white directors reveals just how opportunistic they are, and also that they are prepared to embarrass themselves for a few quid.

Sorry but I wont go and see it.

Nor will the fans of the film - so lets boycott the movie.

Lets make sure it flops on its arse.

Idris Elba goes through his paces as a Norse deity on the Friday Night With Jonathan Ross show. Photograph: Brian J Ritchie/Rex Features

Even for an actor who has played a vampire-hunter with a guilty conscience, a Baltimore crime lord with a taste for Adam Smith, and an asset manager with a stalker, the role of the Norse deity Heimdall – guardian of the burning rainbow bridge between the world of men and the world of gods – was always going to be a bit of a challenge.

But playing a god in Kenneth Branagh's forthcoming film Thor has turned out to be the least of Idris Elba's worries, after fans of the comic books turned on the star of The Wire for reasons that have nothing to do with his acting ability and everything to do with the colour of his skin.

When news emerged late last year that the 37-year-old black Londoner had been chosen to play Heimdall, "the whitest of the gods", a being who can hear the sap flowing in trees and look across time and space, many devotees of the Marvel comics on which the film is based flocked to online forums to weep, gnash their teeth and unleash a tide of indignation.

A fortnight ago, the actor told Jonathan Ross that his take on Heimdall was "Norse by way of Hackney, Canning Town". And at the beginning of the month, he told a press conference that he saw his casting as an encouraging step.

His view was not shared among the more vehement of the comic books' fans. "This PC crap has gone too far!" wailed one. "Norse deities are not of an African ethnicity! … It's the principle of the matter. It's about respecting the integrity of the source material, both comics and Norse mythologies."

Fellow fans were quick to nod their horn-helmeted heads.

"At the risk of sounding like a bigot, I think this is nuts!" said another. "Asgard is home to the Norse Gods!!! Not too many un-fair complexion types roaming the frigid waste lands up there. I wouldn't expect to see many Brad Pitt types walking around in the [first mainstream black superhero] Black Panther's Wakanda Palace!"

Elba, who was born in Hackney, north-east London, to a Ghanaian mother and Sierra Leonean father, has addressed such concerns in a string of recent interviews.

"There has been a big debate about it: can a black man play a Nordic character?" he told TV Times. "Hang about, Thor's mythical, right? Thor has a hammer that flies to him when he clicks his fingers. That's OK, but the colour of my skin is wrong?

Elba, who shot to fame as the erudite and thoughtful gangster Stringer Bell in critically acclaimed US television serial The Wire, also used his interview with TV Times to warn viewers against pigeonholing his new BBC crime drama, Luther, just because it was about a black policeman.

"I think we'll put ourselves in a corner if we just describe Luther as a black detective," he said. "There haven't been many in the past, but the fact that he's black is neither here nor there."

The actor added that while it was "great to have a character who happens to be black in the central position … he still bleeds, just like anyone else".

Elba is working in the US and was unavailable for comment yesterday.

However, his publicist flatly dismissed any suggestion of a row between fans and film-makers, telling the Guardian that the actor was merely being mischievous. "There's no controversy," said Rupert Fowler. "Idris was being flippant in the [TV Times] interview."

His UK agent, Roger Charteris, said Elba had chosen the role of Heimdall on artistic rather than political grounds. "He just wanted to do the movie and work with Kenneth Branagh.

"He liked the script and he liked the movie and he had always wanted to work with Kenneth Branagh. It wasn't like a statement: 'Oh, I'm going to do this.' It's always a purely creative decision."

Or perhaps Elba was seeking to emulate his fellow British actor and Wire costar Dominic West. Last year, West – who has played the Ukrainian-Russian son of Pablo Picasso, a Spartan statesman and a French detective – revealed he had decided to accept the part of the Australian scientist Professor Howard Florey in a BBC TV drama about the discovery of penicillin, in protest against non-English actors playing famous English roles. "I was sort of smarting from Russell Crowe coming over here and playing Robin Hood and all these foreigners coming over here and stealing our great heroes," he said, his tongue lodged firmly in his cheek. "I felt I was striking a blow back by being a Brit playing a foreigner."

The Equality and Human Rights Commission said: "It's up to the casting director and producers to decide who is suitable for a role. It is not actually illegal to discriminate for authenticity purposes in the theatre. There is an exception under the Race Relations Act which says if it is required for the role, you can ask for someone of a certain colour."

Posted by Defender of Liberty at 01:36

I feel a remake of Malcolm X is long overdue. My vote is for Ashton Kutcher. Maybe Ethan Hawke.

Skin colour is nothing more than a physical property of a human being. Movie moguls see fit to discriminate on these grounds of physical discrepencies regularly, hence why Johnny Vegas didn't even bother to audition for the role of the new terminator & why Jason Statham won't be the lead role in the Stephen Hawking biopic.

Deny one on appearance, deny all who don't precisely fit the physical appearance of the character in question, for roles where an existing and fundamental image is necessary to the essence of the story.

Making mountains out of mole-hills. Good grief! Its mythology. Which means it is FAKE! HELLO?.....I am white, and I think all the griping is BS. Just for this, I hope they make the next 10 white superheroes black! LMAO!....but I bet you don't allow this comment to be posted. After all, conservatives want limited government limited to ONLY THOSE THAT AGREE WITH THEM!