White and British = no benefits and no council house 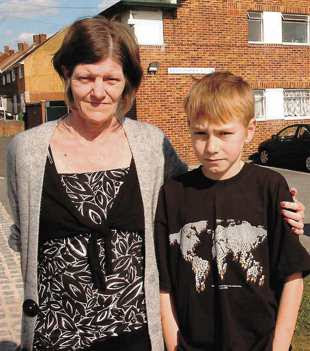 
A BRITISH family who lost everything after living abroad and returned home for help have been told by Havering Council they are foreigners and entitled to nothing.

Desperate Lorraine Marsland, 52, begged to be put on the council's housing register after arriving empty-handed in the UK with grandson Dylan, 10.

The pair had just the clothes they stood up in when they landed in England in January after their home and belongings in Torrebieja, near Alicante in Spain, were repossessed by the Spanish authorities.

Since then Lorraine, a former croupier in Liverpool, and Dylan have been living in Abercrombie House hostel, in Bridgwater Road, Harold Hill, surviving on food parcels donated by the church and social services.

Both are British citizens but this week the council refused to help, apparently labelling the pair 'asylum seekers' in its rejection letter, because Lorraine - who lived in Spain for 23 years - did not meet habitual resident status.

"It makes me feel really awful; I feel like a foreigner in my own country," she said. "I never thought this would happen - I honestly thought if I came back here everything would be ok.

"But I'm being told I'm entitled to nothing even though I paid my taxes for years before I moved to Spain."

Havering Council insisted it had "at no time" classed the pair as asylum seekers but was simply quoting the relevant sections of the Housing Act.

However, it did brand them "persons from abroad", rejecting Lorraine's bid for housing, and now the frantic grandmother has been given one week to move out of the hostel.

"Dylan will be taken into care and I will be on-the-street homeless," she said. "I literally have nowhere to turn. I have no immediate family.

"I am the only relative Dylan's got here - surely social services shouldn't separate us?"

Lorraine who has been searching for work since arriving in the UK, has also been turned down for child benefits as well as Job Seekers' Allowance by the Department for Work and Pensions.

Dylan's single mum Lisa, 30, remains homeless in Spain with her other son, Bradley, four, as she tries to arrange emergency documentation to fly her younger son to England.

Lorraine said: "In some ways I don't want them to come here because they'll be in exactly the same situation as us, but they have nowhere there either.

"Luckily I'm a strong woman and I'm prepared to fight my corner on this."

A council spokesman said: "These are very complicated circumstances and while we continue provide temporary accommodation to Ms Marsland, we will explore all possible housing options."

The family were plunged into severe financial difficulties after they tried to sell their inherited home in Spain and discovered there was a huge second mortgage on it that they could not repay.

Strict embargo laws on repossessed properties in the country meant they were unable to retrieve any of their personal effects.

Lorraine said: "All I want is a place to live and my family back together again. Dylan's really missing his mum and brother.

Posted by Defender of Liberty at 11:19

Welcome to NuLiebour's socialist paradise. If she were a Muslim she'd have a large house and financial benefits galore. The quicker this Marxist, white England-hating excuse of a government is kicked out, the better it will be for Britain.

Biggest mistake they ever made,
it woke me up to reality.

I'm seeing a great opportunity here to win over hearts and minds to the BNP. Are Lorraine and Dylan BNP supporters yet? Maybe not. Maybe they've heard lies in the media about the BNP and think the BNP are bad. But in the future, that could be different.

Imagine the following scenario: BNP volunteers swoop in to rescue Lorraine and Dylan, to provide shelter and food for them in their hour of need. They were shunned by the LibLabCon, but embraced by the BNP. Once the BNP have got Lorraine and Dylan back on their feet, they go back into the community as life long BNP advocates.

Next time they hear somene saying bad things about the BNP, Lorraine and Dylan will speak up and say something along the lines of "I won't hear a bad word said about the BNP, they helped me out when I was at my most desperate, when I was in my hour of need when the rest of the world shunned me. The BNP are good people and I will defend them to the death!"

Now multiply this by thousands of people, each with their own "BNP saved my life" story to tell the world. It will change public perceptions of the BNP.

My Fatherinlaw lived in Thialand for 3 years, he came back, they wouldnt give him any bennefits, no Health care and wouldnt put him on the Council Housing list.

I am currently trading commodities, my next big trade is to invest in Rope !!

She still has a British Passport, still has British citizenship and lived in the European Union.

Why can't she take the British Government to the Human Rights Court?

They cant cos they is white !!

The reason she cant take this to the ECHR is because 1.she has no money and 2. Brown's disgusting government will tell lies again, just as they did with the British Pensioners overseas whose Pensions they will not uprate.
What has become of the British? It started with Blair and Straw wanting/insisting they want a multicultural UK! Thanks to them and straw is still there doing it with Brown. These Labour people are SICK. As a previous comment said had she been black or muslim the Govt. would be bending over backwards to help. Give expensive accommodation and full status of all benefits in the UK. Wake up Britain and get rid of Labour.