CENSORED - DO NOT READ THIS STORY 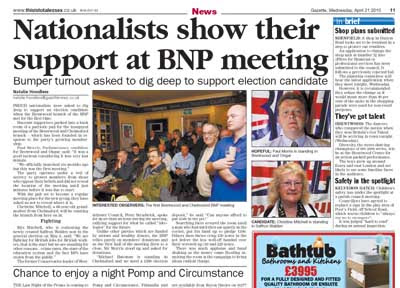 If you want proof we live in a Liberal Fascist state here it is.

The fact that a journalist wrote a fair, as opposed to the NUJ demanded anti-BNP biased journalism that is required to be produced by its members, articles about the BNP which stated the truth of a BNP meeting - and then that article is forced off of the website of the paper - shows you we are living in a state just like the Nazis or Communists.

The Red Guard of the NUJ have imposed censorship on our society.

This is not a democracy.

This is a politically correct liberal fascist state - and we in the BNP are going to smash it.

And one day those guilty of its construction will pay for it.

Those who have stolen our democracy from us will one day reap their reward.

And yes, that is a threat to the guilty.

The guilty should be afraid.

One day the law under a BNP government will catch up with them.


Essex weekly takes down BNP story after complaints
by holdthefrontpage staff
A weekly newspaper has removed an article about the British National Party from its website after complaints from readers.

Last week's edition of the Brentwood Gazette featured a report on a BNP election meeting in the town which presented the party in what some claimed was a flattering light.

The story's intro read: "Proud nationalists were asked to dig deep to support an election candidate when the Brentwood branch of the BNP met for the first time.

It continued: "Buoyant supporters packed into the back room of a patriotic pub for the inaugural meeting of the Brentwood and Chelmsford branch, which has been founded in response to the party's growing membership."

The story, originally published in print last Wednesday, swiftly generated a host of comments on the paper's thisistotalessex.co.uk website.

Will from Chelmsford wrote: "I am surprised that the reporter who attended this meeting didn't make a contribution to the BNP themselves, from the tone of the article it sounds like they're already a fully paid up member! So much for impartiality and journalistic integrity."

Kev, also from Chelmsford, wrote: "Where have journalism and editing gone on this site? No questions raised or cross examining? None at all.

"This looks as though a BNP press release has been regurgitated in its entirety. Hardly the actions of an independent media during the run up to a general election."

One reader, who asked not to be named, contacted HTFP to say she would be reporting the paper to the Press Complaints Commission over the story.

However the story, along with all the comments, has now been taken down from the site.

Brentwood Gazette editor-in-chief Alan Geere has so far not responded to requests for a comment on the episode.

Posted by Defender of Liberty at 00:13