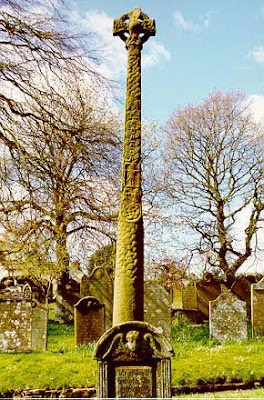 It is St.Georges Day tomorrow and the liberal media will no doubt be repeating their usual propaganda about 'St.George being from the Middle East'.

There are in fact two St.Georges Day traditions in England.

The first, and oldest is the Nordic pagan tradition of the warrior fighting the dragon eg the story of Sigurd in the Saga of the Volsungs ;

This style of Nordic dragon slaying legend was around long before any real, or pseduo-real, Turkish St.George myth.


The Christian tradition is an import.


The myth of St.George is a relic of the survival of indigenous English pagan tradition that was given a Christian makeover.

This was how Christianity operated in Britain, it worked with and subsumed the pagan traditions of England into it - and then sought to Christianise them.

St. George Day is a celebration of an ancient Nordic archetype buried deep in the primal racial subconscious of the indigenous Indo-European peoples and the Teutonic and Anglo-Saxon ethnic sub-sets of that racial group.

There are some superb carved grave stones with mixtures of Christian and Pagan imagery such as the Gosforth Cross which show the fusion process at work.

The attempt by the liberals to 'multi-culturalise' the St.Geroges Day tradition, is just another attempt to suffocate and deny us our indigenous identity.

If they tried to tell Native Americans they couldnt celebrate their own history and culture then the world would be in uproar, but its okay of they are whites.

Posted by Defender of Liberty at 14:05

This story of Sigurd is really not well enough known.

Thanks for putting it out there.

I suggest you look up the Turk Saint Theodore of Amasea who was the real 'Dragon' slayer (it was actually a Crocodile) and the story was then stolen many years later to improve St George's story.

Like most things in England its only good because of the input of foreigners.

George was Greek, not Turkish, the Turks were roaming the Asian plains at the time of St George. He was a Roman soldier who refused to bow down to the Emperor.

Modern Turkey had been Greek for thousands of years and was still largely Greek upto the Great War.