Another Bent Tory In Boris's Gang 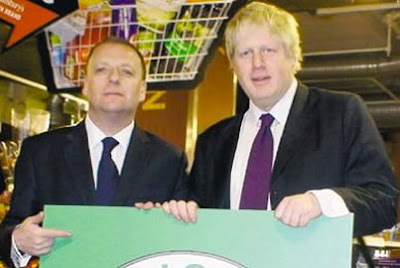 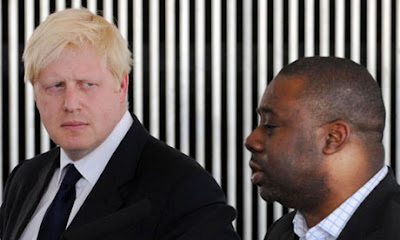 
For FFS Boris - to lose one deputy mayor who is revealed as a crook is bad enough - but TWO = thats beyond belief !

Hey you Nothing British About the BNP boys, its another bent as a nine bob note Tory !

What with the 'blacks go home' jibes of James McGrath, another Boris appointee ;

and the resignation of Ray Lewis ;

This is simply incredible !

Former deputy mayor of London Ian Clement has been given a suspended jail term of 12 weeks for fraudulently claiming the cost of restaurant meals.

Two further counts of fraud against Clement, 44, were discharged at Westminster Magistrates' Court.


After pleading guilty to the charges Clement said: "I have failed to live up to the high standards of office that were properly expected of me."

Clement stepped down as deputy mayor for external relations in June.

"You must have known full well when questioned in relation to these matters of the manifest bogusness of the claims you were making.

"That said, I accept you have lost much as a direct result of your wrongdoing.

"You knew very well what was required when using a corporate credit card and you saw yourself as somehow above the rules," he said.

The court heard he paid for unauthorised restaurant meals on his card.

Personal use of a corporate credit card is a breach of City Hall regulations.

Clement said: "I have given many years of dedicated public service to London, which has been my pride, my passion and my life. That is now over.

"There is no denial in regards to my responsibility.

"I very much regret and indeed am truly sorry for my actions and that these have let down many good people, my family, my friends and colleagues including and not least, the mayor of London."

Judge Purdy suspended Clement's jail sentence for 18 months and has imposed a curfew of between 9pm and 6am for 12 weeks.

Clements was also ordered to pay £1,000 in prosecution costs.


When Boris Johnson unveiled his first appointment in the afterglow of his victory over Ken Livingstone, the arrival of Ray Lewis on London's political scene was widely acclaimed as a shrewd and farsighted move.

The youth worker, who advocated tough love and strict discipline for the capital's wayward teenagers, seemed the perfect foil for the Etonian desperate to improve his reputation among London's ethnic minority communities.

But when Lewis resigned last night amid allegations of financial misconduct and inappropriate behaviour following a Guardian investigation, the heady days of early May were a distant memory.

It was the culmination of a series of exchanges that began on Wednesday when the Guardian approached the mayor's office with a list of questions about Lewis' past. On Thursday, Johnson declared he had "every confidence" in his "tremendous deputy".

Last night, facing the press alone this time, Lewis told reporters: "I cannot allow things that I have been into, up to and around me to obscure the important business of this mayoral team.

"For this reason I must step down as deputy mayor for young people with immediate effect."

The resignation is the second blow to Johnson's administration in the past 12 days, following the resignation last month of a senior adviser, James McGrath, over comments about African-Caribbean migrants. It is also an embarrassment for other senior figures within the Conservative party - including David Cameron, the leader - who have fallen over themselves to embrace Lewis for his work with disadvantaged youngsters at the Eastside Young Leaders Academy, a project he set up in east London five years ago.

Last night Ken Livingstone was unforgiving about Johnson's difficulties. "In my entire eight years in office I suffered only one enforced resignation of any of my most senior officials, Lee Jasper - and that only after seven years - and this extreme contrast shows vividly the incompetence of Boris Johnson and his administration," he said.

"It is an equal crisis for David Cameron who, it should be remembered, chose to make his first photo opportunity as Tory leader with Ray Lewis."

Johnson said he would reappoint Lewis if he cleared his name but added that he had been "misled" over Lewis' claim to having been appointed a magistrate. The original allegations against Lewis centred on claims of financial irregularities and inappropriate behaviour during his time as a Church of England priest in the mid-1990s. It was claimed he had borrowed about £45,000 from parishioners including an elderly woman and a man with learning difficulties.

At Thursday's press conference Lewis dismissed the accusations as "complete rubbish" and pointed out that he was a justice of the peace - a claim backed at the time by Johnson. But yesterday, that claim was punctured when the Ministry of Justice said he not been appointed as a magistrate.

As he bemoaned the "drip, drip" of allegations last night, Lewis said he had been recommended to become a magistrate but not appointed. "It was that seeming duplicity that was the reason I asked to step down as deputy mayor," he said.

Johnson had claimed the allegations against Lewis only surfaced because some people had a dislike for Lewis' work with wayward boys, which the mayor characterised as a brave stand against a "stifling orthodoxy".

Johnson's attachment to his deputy was underlined on Andrew Marr's BBC Sunday programme last month. "[He was] one of the reasons I became so determined to become mayor. He just inspired me."

But last night political opponents were queuing up to lampoon the mayor. John Biggs, London Labour assembly member, said: "Obviously we have to question our glorious mayor's judgement. He needs to get a grip or it will rebound on him again." Another assembly member, Murad Quereshi, said Lewis' resignation raised questions about where the capital was heading. "We have already lost one senior adviser to allegations of racism and now we have lost Ray Lewis ..." said Quereshi. "It just makes you wonder what the future holds for this administration."

The Church of England confirmed Lewis was on the "Lambeth list" which banned him from working as a priest in England between 1999 and 2005. The Rev Chris Newland, chaplain to the Bishop of Chelmsford, said the church had issued the ban because "things had been alleged against him". The ban allowed Lewis to call himself a priest, but not to minister.

June 19 Interviewed on the BBC Radio Four's Today about the cost of the 2012 Olympics, Boris Johnson is asked about a memorandum agreed by his predecessor, Ken Livingstone, and the government to protect Londoners from any overspend. He said: 'I rather doubt its existence.' The document was on a government website

June 20 Johnson comes under fire from equality campaigners after he decided that Rise, one of London's biggest free music festivals , should drop its anti-racist message

July 3 At a press conference Johnson tells journalists that the allegations against Ray Lewis 'did not stop him from becoming a JP'. Yesterday it emerged that Lewis is not a JP. He resigned in the evening
Posted by Defender of Liberty at 08:30

Labels: Ian Clement, Nothing British About The BNP