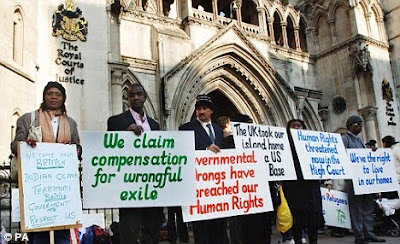 For a long time I have been writing about the ethnic cleansing of Diego Garcia by successive Labour and Tory governments and the abandonment of their people into poverty.

This was a disgusting and shameful episode in British history.


Here these links reveal that even though they won a court victory in the Court of Appeal to return to their own homeland - the Labour government went back to court and won a case to force them out of their own homes and land ;

You’re at home one evening and an armed convoy rolls into town. Soldiers arrest you and your family, and everybody else – the whole town. They allow you to pack one suitcase each; load you all into trucks; machine-gun all your livestock and pets; burn your house and contents; and a few days later deposit you on a street-corner in a slum in Mexico City. They inform you that the U.S. Government needs your town for a military base, and that the Border Patrol, Immigration Service, and Coast Guard have been ordered to prevent your return to the States, and by force if you insist.

Thats what the British government and American government did to the Diego Garcian people.


An interesting story in the American press has revealed just how evil this process truly was ;


In order to convert the sleepy, Indian Ocean island of Diego Garcia into a dominating military base, the U.S. forcibly transported its 2,000 Chagossian inhabitants into exile and gassed their dogs.

By banning journalists from the area, the U.S. Navy was able to perpetrate this with virtually no press coverage, says David Vine, an assistant professor of anthropology at American University and author of “Island of Shame: the Secret History of the U.S. Military on Diego Garcia(Princeton University Press).”

Purchase: Island of Shame: The Secret History of the U.S. Military Base on Diego Garcia

“The Chagossians were put on a boat and taken to Mauritius and the Seychelles, 1,200 miles away, where they were left on the docks, with no money and no housing, to fend for themselves,” Vine said on the interview show “Books Of Our Time,” sponsored by the Massachusetts School of Law at Andover.

“They were promised jobs that never materialized. They had been living on an island with schools, hospitals, and full employment, sort of like a French coastal village, and they were consigned to a life of abject poverty in exile, unemployment, health problems, and were the poorest of the poor,” Vine told interview host Lawrence Velvel, dean of the law school.

Their pet dogs were rounded up and gassed, and their bodies burned, before the very eyes of their traumatized owners, Vine said.


“They were moved because they were few in number and not white,” Vine added. The U.S. government circulated the fiction the Chagossians were transient contract workers that had taken up residence only recently but, in fact, they had been living on Diego Garcia since about the time of the American Revolution. Merchants had imported them to work on the coconut and copra plantations. Vine said the U.S. government induced The Washington Post not to break a story spelling out events on the island.

“Through Diego Garcia,” Vine pointed out, “the U.S. can project its power throughout the Middle East, and from East Africa to India, Australia and Indonesia. With Guam, the island is the most important American base outside the U.S.” He said U.S. bases now number around 1,000, including 287 in Germany, 130 in Japan and Okinawa, and 57 in Italy.

“Bases have been essential tools of U.S. military and economic power since not long after independence,” Vine pointed out. “We had bases all the way to the Pacific. After the Civil War, the U.S. began to acquire coaling bases in the Pacific.”

Although the Chagossians were forcibly removed in 1971, they still hope to return, Vine says, and refer to their period of exile as one of “profound sorrow.” Vine says they would be happy to live on the unused eastern portion of the island and work at the base but the U.S. instead “imports contract labor from other areas so they can send them home when the job is done.” The island’s exiled survivors and their descendants today number about 5,000.

Long off limits to reporters, the Red Cross, and all other international observers and far more secretive than Guantánamo Bay, many long suspected the island was a clandestine CIA "black site" for high-profile detainees, Vine wrote in a related article. Journalist Stephen Grey's 2006 book “Ghost Plane” documented the presence on the island of a CIA-chartered plane used for rendition flights. On two occasions former U.S. Army General Barry McCaffrey publicly named Diego Garcia as a detention facility. And a Council of Europe report named the atoll, along with those in Poland and Romania, as a secret prison.

The island became “a major launch pad” for the U.S. attacks on Afghanistan and Iraq, Vine said. In addition to its capacious harbor, the island readily supports some of the largest U.S. warplanes, including Air Force B-52s, B-1Bs and B-2s. Two years ago, the Pentagon awarded a $32 million contract to add a submarine base to the island’s arsenal.

Diego Garcia had been a British possession until 1966, when London allowed the U.S. to use it as a military base in exchange for cancelling a $14-million British debt for a military hardware purchase. Some idea of the size of the base may be conveyed by the fact it is said by the Pentagon to contain 654 buildings.


(Sherwood Ross is a media consultant to the Massachusetts School of Law at Andover. Reach him at sherwoodross10@gmail.com )

Posted by Defender of Liberty at 05:22