The Generals and Nuremberg 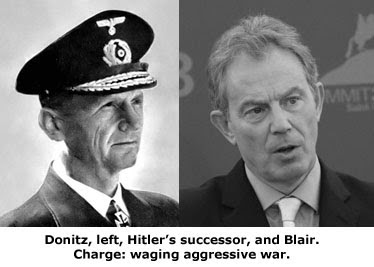 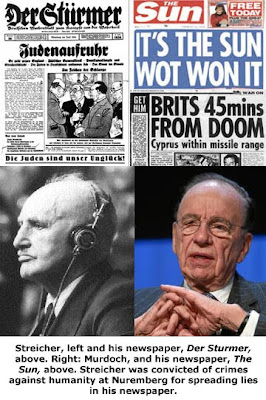 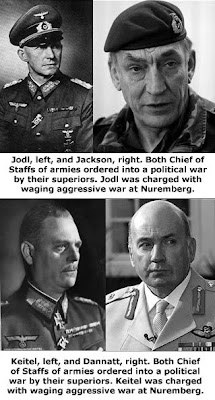 The Case for War Crimes Trials — Is Rupert Murdoch the Julius Streicher of Our Time?

There is an open-and-shut case for War Crimes Trials against Tony Blair and all others involved in the planning and commission of the aggressive, immoral and illegal war against Iraq.

Furthermore, there is also a prima facie case against the media bosses who deliberately incited the war against Iraq. The chief culprit in this regard is Rupert Murdoch, owner of The Sun newspaper. That propaganda sheet has consistently lied to the British public on all manner of issues, most notably the famous Blair-lie “Saddam’s 45 minute missiles.”

The Sun has also repeatedly claimed to be the kingmaker in British politics, and even boasted on its front page about how it was responsible for election victories. The Nazi propagandist Julius Streicher, who was responsible for incitement against Jews in Nazi Germany with his Der Sturmer newspaper, was arrested, tried and executed at the Nuremburg Trials.

streicher-murdochThe precedent has once again been set. There is, therefore, a prima facie case against Rupert Murdoch and the other media who were responsible for inciting the war against Iraq. They should also be put on trial, just as Streicher was put on trial for the crime of publishing a newspaper.

There is already an online petition calling on the President of the United Nations General Assembly, H.E. Father Miguel d’Escoto Brockmann, and the Attorney General of the United Kingdom, and their successors in office to bring Blair and his associates to trial.

Organised by the independent Blair War Crimes Foundation (BWCF), the petition lays out the basis for criminal charges to be brought against Blair and all those involved in planning, preparing, inciting and encouraging the war.

The petition reads as follows:

“We, the citizens of the United Kingdom and other countries listed, wish to uphold The United Nations Charter, The 1998 Rome Statute of The International Criminal Court, The Hague and Geneva Conventions and the Rule of International Law, especially in respect of:

The High Contracting Parties undertake to enact any legislation necessary to provide effective penal sanctions for persons committing, or ordering to be committed, any of the grave breaches of the present Convention.

A belligerent party which violates the provisions of the said regulations shall, if the case demands, be liable to pay compensation. It shall be responsible for all the acts committed by persons forming part of its armed forces.

We therefore call on you to indict Anthony Charles Lynton Blair in his capacity as recent Prime Minister of the UK, so long as he is able to answer for his actions and however long it takes, in respect of our sample complaints relating to the 2003 Iraq War waged by the UK as ally to the United States of America.

We are concerned that without justice and respect for the rule of law, the future for us and our progeny in a lawless world is bleak, as revealed by recent US declarations about the use of torture and the events of December 2008 in Gaza show.

The following are our sample complaints relating to the Iraq War 2003–2009:

1: Deceit and conspiracy for war, and providing false news to incite passions for war, causing in the order of one million deaths, 4 million refugees, countless maimings and traumas.

3: Causing the breakdown of civil administration, with consequent lawlessness, especially looting, kidnapping, and violence, and consequent breakdown of womens’ rights, of religious freedom, and child and adult education.

4: Failing to maintain the medical needs of the populace.

5: Despoliation of the cultural heritage of the country.

6: Supporting an ally that employs ‘waterboarding’ and other tortures.

7: Seizing the assets of Iraq.

10: Marking bodies of prisoners with numbers, writing, faeces and other degrading treatment.

11: The use of cluster bombs and other indiscriminate weapons including white phosphorous on “shake and bake” missions.

12: Supporting indiscriminate rocket attacks from F16 fighter planes on women and children in Fallujah in Nov 2004.

13: Supporting the shooting up of ambulances and medical personnel in Fallujah in Nov 2004.

14: Supporting the expulsion of the entire population of Fallujah save for young men of military age, for a reprisal attack on that city in Nov 2004.”

Posted by Defender of Liberty at 12:33

Dr Goebbels was hugely popular in Germany during WW2 whatever present day historians say and he was to be put in the dock by the allies along with Jodl, Keitel etc. He committed suicide along with his wife in the ruins of the chancellory in Berlin. I would suggest Nick reminds the BBCs Ian Robinson et al that a precedent has been set for war crimminals lackeys whether they be generals or propagandists.

you confused moron!
You like MSP, Public Enemy and Sex pistols and you are a British Fascist???
Is there at least one semi-sane person in the whole fucking BNP???

@ Anon, wake up and smell the fascism.

The answer is no. Now if you've no solutions go play with the traffic as we've no time for fools.

The Nuremberg trials were in essence a show trial, necessary at the time after a war in which 60 million had died. Looking at the IMT of the major criminals in retrospect Hess, Jodl, Doenitz and Sauckel should not have been there , after all Hess had flown to England in 1941 to seek peace. The Soviets even wanted the Katyn massacre to be ascribed to the defendants. Streicher was convicted and hanged for his writings...the first victim of an international hate crime law. So the trials in retrospect were neither fair or just. Anyway they were used by the US and Soviets for propaganda purposes and to ensure Germany the most civilised and advanced nation in the world prior to the war became a self loathing demoralised nation which it remains to this day.

I also see that Nicks round of TV interviews this week have improved greatly since the rather sorry Adam Bolton SKY spinfest performance earlier in the week.

Nicks performances on the generals issue were direct and to the point. he looked strong, with principles and with conviction.

The public can spot a phoney and without the mainstreme media to back up the spin, we simply fail when trying to be all things to all men.

What nick has to ALWAYS remember is that he is not talking to a media luvvie doing the interview, who represents no-one, but the silent majority - forget the dopes of the left. He does not need to tone it down for that majority - not anymore.

The recent shameless playing of the PC card over membership was extremly damaging, reaching it's failed climax as i said on the Adam Bolton interview and to some extent I feel you should take some of the blame on trying to over egg the PC side of the issue and trying to be far too clever - it made Nick look like a fool.

It is a negative, it should have been played as a negative! from where it could then have been turned into a positive as an act of oppression, nothing more needed to be said on the issue.

You will never convince the soft left or the liberals to ever vote for this party, so stop trying!

We need a strong and robust presence that gives people hope, not reinforces the Liberal lefts destructive ideology. A hope and positive conviction that gives people the uplifting will and the REASON to vote BNP.

We have taken most of the gains on the back of support in towns that are being or about to be ethnically cleansed. On the back of the failor of the other parties and of the destruction of our democracy.

This and the fact that Nick is a fantastic debator and can highlight the hypocracy from the elite when he gets a few seconds on TV where the press simply try and smear him and the party.

he almost never gets a chance to discuss our wider philosophy -until now!

Now is not the time to wave the weak BNP backtracking, flip flopping, PC card as was tried on Adam bolton.

NO more - now is the time to take our message to the people, give it to them strait, sound strong and convincing, ignore the crowds at question time, ignore the PC brownie points the left and corporate crooks have used to destroy the country - NO MORE now is the time to tell them of the alternative, the unwatered, uncompromised, hypocracy free alternative. an alternative up until now broadly unspoken within the general public, which is what has lead to the unchallenged left dominating public opinion.

This is about to change, but ONLY if Nick is strong, uncompromising and strait talking as he has been over the generals issue.

he will then show the public that he is the leadership the public have been crying out for.

Go weak and compromised and the public will write you off as a waste of time, where is the BNP the silent majority will ask, I wanted to see the BNP and what they had to offer, all I got was some wishy washy nonsense that I couldn't make head or tail off.

Nick tell them what you have to offer - tell em strait.

Leaders to not mince their words, this is the moment you have been waiting for - don't blow it on mealy mouthed spin.

"Property has been bought up by coloured landlords, who have then made the position of white tenants intolerable,and entire streets have gone over to a coloured population." -

"I found the 'Nothing British' website, appropriately named, as it turns out. I see someone called Maurice Cousins apparently runs it (presumably instructing some sad hack of a web designer). A little googling reveals:
Maurice was a research assistant at Conservative Friends of Israel. He has previously worked for Douglas Carswell MP and interned for Douglas Murray at the Centre for Social Cohesion. His interests are in foreign affairs, Islamism and the US-UK special relationship."

Watch it again.
Cameron wants Islam to dominate his party!