The Most Dangerous Man in Britain 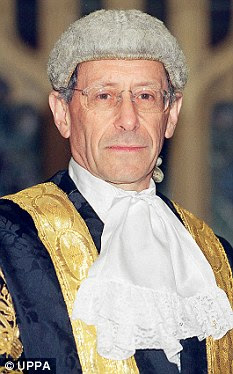 Like a dark thread through recent legal history, weaves the work of Lord Justice Sedley.

Lord Justice Sedley was a former member of the Communist Party of Great Britain at the same time as Gerry Gable stood as a candidate for the party.

Lord Justice Sedley was the man who dismissed David Irving's appeal in his famous trial.

Lord Justice Sedley was one the three appeal judges who heard the Christopher Roberts and Barry Roberts appeal in their case against Searchlight and who struck out their appeal.

Lord Justice Sedley is the judge who said that because more blacks were on the DNA database due to them being arrested by the police than in relation to the number of whites, that therefore everyone in the country should have their DNA taken and kept by the police as otherwise to allow the DNA database to store the black criminals DNA would be 'racist'.

Now the judge has been given the powers by the government to issue legal guidance for magistrates ;


This judge is one of the most dangerous men in Britain.


He is a relic of the Cold War, an ex-Communist deep cover operative working within the Establishment.


He is truly a 'Menace to British Society'.

Lord Justice Sedley is widely regarded as one of the most Left-wing of judges.

His Who's Who entries, under recreations, have included 'changing the world'.

The 69-year-old is a strong supporter of human rights, and spent his 28 years at the Bar working principally in the fields of civil liberties and discrimination law.
When he was appointed a High Court judge in September 1992 it was seen as a clear signal that politics should be no bar to promotion within the judiciary.

He has publicly questioned the supremacy of Parliament, suggesting it is gradually being replaced by a dual sovereignty, whereby government ministers are accountable politically to Parliament but also legally to the courts - and by implication to judges such as himself.

In the 1970s he was a tutor at the Communist University of London, a summer school organised by the Communist Party, which at its height boasted more than 1,000 students.

The father of three became a Lord Justice of Appeal in 1999, and in 2000 was elected president of the British Institute of Human Rights.

Lee ,you are hated by the filth Establishment for the same reason I am.
I will never shut up, I will never cower, never; I will just get more determined to expose them.

Stay on guard mate, they are true filth who are capable of anything!

This all tallies with the information I have from someone who was at Cambridge with Sedley and a Communist Party member with his as well. Together they worked on many a devious plot to overthrow capitalism and bring in Stalin's followers. This was all when the Communist ideal was completely blown and shown up for what it is. So there is no excuse for an intelligent and fairminded person to sign up to the Communism and what is more take a first job in a legal chambers dedicated to protect communists. But it hassn't stopped Sedley.
Thus I am astonished that someone who's life work is dedicated to undermining the Free World, i.e. you and me, is allowed to flourish as an establishment figure in the UK. He must have many hidden sponsors.
In the same way that English fairplay has allowed Islamism (the nasty side of it) to flourish through ignoring the threat, Communists are allowed in every branch of government. How come?