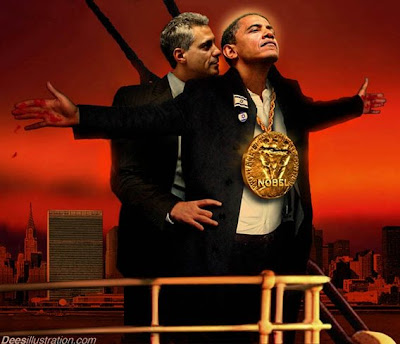 Image - Satan whispers to the Anti-Christ - " You are a God. Now press the goddamn button and start the Apocalypse ".

Another superb article from John Pilger below.

We all know that the primary aim of the war in Afghanistan is to secure the gas and oil pipelines planned for the country as part of the US Silk Road Eurasian Strategy followed by the plan to destabilise Pakistan by driving the Taliban out of Afghanistan into Pakistan and thereby allowing the US to send troops into a Pakistan riven by civil war and remove its nuclear warheads on the pretext of 'stopping Osama Bin Ladens computer generated ghost and Al Qaeda from seizing them'.

The picture above is by David Dee's, the man I consider the worlds greatest political artist at this time.

The 'whisper' of Rahm into Obama's ear is chillingly brilliant.

Anyone notice how yet again the strange, and very long list of Al Qaeda terrorism has allowed the US to go into a nation and steal its oil, gas or weapons ?


I wonder how soon till the media tell us that Al Qaeda is helping Iran build WMD and 45 minute missiles of mass destruction on London and New York.

Oh yeah, we are two thirds the way there already.

Lets now just wait for the next Holywood production of 'Osama Bin Laden in his cave says Iranians must fight the US and Israel' video or audio tape to appear.

No doubt Hollywood and the agents of the US Military-Industrial Block Shadow Government are working on it right now.

Barack Obama, winner of the 2009 Nobel Peace Prize, is planning another war to add to his impressive record. In Afghanistan, his agents routinely extinguish wedding parties, farmers and construction workers with weapons such as the innovative Hellfire missile, which sucks the air out of your lungs. According to the UN, 338,000 Afghan infants are dying under the Obama-led alliance, which permits only $29 per head annually to be spent on medical care.

Within weeks of his inauguration, Obama started a new war in Pakistan, causing more than a million people to flee their homes. In threatening Iran - which his secretary of state, Hillary Clinton, said she was prepared to "obliterate" - Obama lied that the Iranians were covering up a "secret nuclear facility", knowing that it had already been reported to the International Atomic Energy Authority. In colluding with the only nuclear-armed power in the Middle East, he bribed the Palestinian Authority to suppress a UN judgment that Israel had committed crimes against humanity in its assault on Gaza - crimes made possible with US weapons whose shipment Obama secretly approved before his inauguration.

The old dog whistle test
At home, the man of peace has approved a military budget exceeding that of any year since the end of the Second World War while presiding over a new kind of domestic repression. During the recent G20 meeting in Pittsburgh, hosted by Obama, militarised police attacked peaceful protesters with something called the Long-Range Acoustic Device, not seen before on US streets. Mounted in the turret of a small tank, it blasted a piercing noise as tear gas and pepper gas were fired indiscriminately. It is part of a new arsenal of "crowd-control munitions" supplied by military contractors such as Raytheon. In Obama's Pentagon-controlled "national security state", the concentration camp at Guantanamo Bay, which he promised to close, remains open, and "rendition", secret assassinations and torture continue.

The Nobel Peace Prize-winner's latest war is largely secret. On 15 July, Washington finalised a deal with Colombia that gives the US seven giant military bases. "The idea," reported the Associated Press, "is to make Colombia a regional hub for Pentagon operations . . . nearly half the continent can be covered by a C-17 [military transport] without refuelling", which "helps achieve the regional engagement strategy".

Translated, this means Obama is planning a "rollback" of the independence and democracy that the people of Bolivia, Venezuela, Ecuador andParaguay have achieved against the odds, along with a historic regional co-operation that rejects the notion of a US "sphere of influence". The Colombian regime, which backs death squads and has the continent's worst human rights record, has received US military support second in scale only to Israel. Britain provides military training. Guided by US military satellites, Colombian paramilitaries now infiltrate Venezuela with the goal of overthrowing the democratic government of Hugo Chávez, which George W Bush failed to do in 2002.

Obama's war on peace and democracy in Latin America follows a style he has demonstrated since the coup against the democratic president of Honduras, Manuel Zelaya, in June. Zelaya had increased the minimum wage, granted subsidies to small farmers, cut back interest rates and reduced poverty. He planned to break a US pharmaceutical monopoly and manufacture cheap generic drugs. Although Obama has called for Zelaya's reinstatement, he refuses to condemn the coup-makers and to recall the US ambassador or the US troops who train the Honduran forces determined to crush a popular resistance. Zelaya has been repeatedly refused a meeting with Obama, who has approved an IMF loan of $164m to the illegal regime. The message is clear and familiar: thugs can act with impunity on behalf of the US.

Obama, the smooth operator from Chicago via Harvard, was enlisted to restore what he calls "leadership" throughout the world. The Nobel Prize committee's decision is the kind of cloying reverse racism that has beatified the man for no reason other than he is a member of a minority and attractive to liberal sensibilities, if not to the Afghan children he kills. This is the Call of Obama. It is not unlike a dog whistle: inaudible to most, irresistible to the besotted and boneheaded. "When Obama walks into a room," gushed George Clooney, "you want to follow him somewhere, anywhere."

Extreme and dangerous
The great voice of black liberation Frantz Fanon understood this. In The Wretched of the Earth, he described the "intermediary [whose] mission has nothing to do with transforming the nation: it consists, prosaically, of being the transmission line between the nation and a capitalism, rampant though camouflaged". Because political debate has become so debased in our media monoculture - Blair or Brown; Brown or Cameron - race, gender and class can be used as seductive tools of propaganda and diversion. In Obama's case, what matters, as Fanon pointed out in an earlier era, is not the intermediary's "historic" elevation, but the class he serves. After all, Bush's inner circle was probably the most multiracial in presidential history. There was Condoleezza Rice, Colin Powell, Clarence Thomas, all dutifully serving an extreme and dangerous power.

Britain has seen its own Obama-like mysticism. The day after Blair was elected in 1997, the Observer predicted that he would create "new worldwide rules on human rights" while the Guardian rejoiced at the "breathless pace [as] the floodgates of change burst open". When Obama was elected last November, Denis MacShane MP, a devotee of Blair's bloodbaths, unwittingly warned us: "I shut my eyes when I listen to this guy and it could be Tony. He is doing the same thing that we did in 1997."

Posted by Defender of Liberty at 07:13

great post lee, also remember that we are also giving military assistance and aid to Georgia in return for teh oil pipeline to run through georgia into europe.