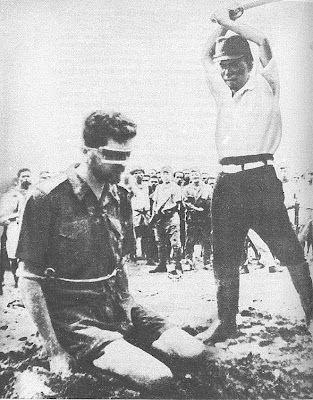 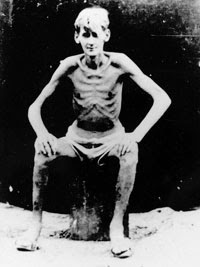 I have just had an interesting conversation with Kirsty Buchanan the political editor of The Daily Express.

She asked me about the Holocaust.

I replied that of course it happened.

But that is not the issue.

The issue is how the Holocaust has become a political football for politicians and the media to use to attack the BNP and Nick Griffin.

I despise the way that cynical opportunists have adopted the holocaust as a way to remove free speech, impose ideological conformity, as a tool for social engineering and a political blunt object to attack the BNP with.

This is not some groundbreaking idea - you can buy books on this issue of The Holocaust Industry stating just this thesis in your local Waterstones ;


I asked her if any of her family had been in a Death Camp during the war.

I said that two members of my family had been in Death Camps.

They had been captured at the Fall of Singapore in February 1942 and then had been kept in various Japanese Death Camps and Work Camps until the end of the war.

My Uncle, Lloyd Holmes, died 6 months after the end of the war from ill treatment in the camps.

50,000 British troops were killed in the Japanese camps including places like Changi Prison.

There were more than 140,000 white prisoners in Japanese prisoner of war camps. Of these, one in three died from starvation, work, punishments or from diseases for which there were no medicines to treat.

Buchenwald (a Grade II camp): An estimated 238,000 prisoners entered the camp, and an estimated 56,500 perished (including about 13,500 who died on evacuation marches ('death marches'). Apparent death-rate: about 24%

That means the Death Rate in Japanese Death Camps was higher than in Dachau and Buchenwald.


Yet none of this history of British soldiers being kept in Japanese death camps is taught to school children.

Every child leaves school with the name Auschwitz seared into their minds, but none leave school knowing the story of Changi.

Until Holocaust Day includes primarily a reference to the plight of British POW's in Japanese occupied territory, and also mentions what the Communists did in Russia and China in the Gulags and Laogai and also the Rwandan and Armenian Genocide - then the Holocaust Industry is cynically using the Holocaust for its own vile political ends.

That is a crime.

To steal from a child a sense of their own identity is a crime against humanity for without having a sense of who we are, where we come from, our national and peoples history, a sense of culture and belonging - then a child becomes gripped by a
ennui, becomes a directionless and rootless ghost and what follows this is usually a descent into nihilism.

In a world of global economics where a corporate decision taken in a boardroom in Tokyo, Tel Aviv, New York or Berlin can throw thousands of British workers on the dole in an instant, having a sense of identity, community, nationhood and roots allows us retain our humanity and dignity.

They may take our homes, our jobs and our taxes but they cannot take way our country, our identity, our culture and our sense of community.

But that is exactly what they have done and are doing.

They have stolen our very sense of self from us, they have destroyed our society, swamped our nation with colonists, dismantled and broken up our communities, destroyed kin based local family communities and forced us to live as strangers amidst strangers and colonists.

Robert Putnam in his book Bowling Alone has detailed the utter devastation that social policies such as multi-culturalism, mass immigration and political correctness have done to our societies ;

Without roots nothing can grow.

Whilst every other ethnic and racial and religions groups in the country are encouraged to celebrate their identity from Black History Month to the endless ethnic only community centres we see across the country, the indigenous White British are denied their identity, taught only to be ashamed of being white and called racists.

We have become a despised ' White Underclass' and even given a name that resembles the Untermensch of Nazi Philosophy by the liberals.

This has devastated our country and people.

The Broken Britain we see in our society is a result of this psychological warfare against our children and people.

If you are not taught to be proud of who you are, where you come from, your history and your community then you will have no respect for others and no respect for society.

Those who are taught that they do not belong have no reason to respect those that reject them.

The media, the left wing teachers and teaching unions, the Labour government and Tory cowards all allowed this to happen.

I said to this woman that Britain has two paths.

The first path is via democratic politics and the BNP. This is because the BNP will defuse the demographic timebomb, deport all the illegals, stop all future immigration, dismantle Multi-Culturalism and force those who are living here as colonists to either assimilate into our British culture or leave.


The second path is a civil war.

If the White indigenous British working class and the Abandoned British and the Nationalist Middle Class are not allowed to reclaim their country then we will witness the growth of separatist racial and religious movements arise in the country.

The constant surrender to Sharia Law, Islamist extremism and the demands of ethnic minorities and the surrender of the British state to extremist minorities will eventually breed militias that will begin removing all those that oppose them - from moderate Muslims to whites, jews and blacks.

Ethnic cleansing has already begun in this country.


And the peace walls in Northern Towns have already sprung up - firstly by the habits of the peoples themselves and also by the councils who have erected walls and fences between ethnic communities.


So the country has a choice - continue to be lead into the abyss by the Liberal Elite, the corrupt mainstream political parties and the corrupt media or vote for the BNP and rebuild Britain.


They are the choices.

Not hard to see what one makes sense is it.

Posted by Defender of Liberty at 04:34

On QT Jack Straw referred to the (then) Indians and muslim buried in the Peronne cemetery; he forgot to mention the major Islamic nation that fought for the Central Powers - Turkey, and that those others, muslim, were killed
while fighting for the nazis.
Which shows where Muslim sympathies really lay
at the time, ..... as now.
Straw knew this and deliberately lied.

Herr Bliar met with the present Mufti in Gaza recently.

Nice piece. I have voted BNP twice now. Its the BNP that have me with that which is vital to my sense of sense , personal identity and ;larger cultural identity and thus who I am and where I am gong . I used to be of what of what the liberal as manufactured a bit rootless at a loss and now I see what as been attempting to do to the British people.

I was considering voting BNP in 2010 but they don't even allow politely worded comments on their own website unless they're supportive of BNP views. Where is the democracy in that??

Starw also forgot the Armenian massacres of WW1, with over 1,000,000 victims.

More selective amnesia on his part.

The Muslim Turks used brutal forced deportations of Armenians from their own country, just like the Indian individual wanted to do for BNP supporters. He should be charged with incitement to violence.

Anon, I regularly post on the BNP website and quite often it doesn't get on, but then like today, I get three posts on in the same day.
It's a Busy Blog, try a bit longer.

As one of the 'Anon' posts mentions about 'rootless'. Yes, I agree, whilst it took some time to see, it is manufactured - very subtly. When one, if inclined, looks back into one's ancestry you will see your forebears - the ones who made this country and passed the baton on to us.

Funnily enough when looking at old censuses from the 1841, 51 and so on etc, one will not see any Patels, Mohammeds, Obongas or Mandellas etc.

Well I certainly didn't when looking at my (paternal)ancestral Parishes of Bermondsey, Walworth or Newington, (now of course sunny and darkest Southwark).

Loosing one's parents, getting married and having children also reinforces what it really is all about. It did with me.

Regards the article - I also had a family member who perished at the hands of Imperial Japan in 1943. Not a direct one, but from the same extended family line and surname.

Also had a grandfather who fought at the Battle of Jutland, and his uncle died in the same war (WW1).