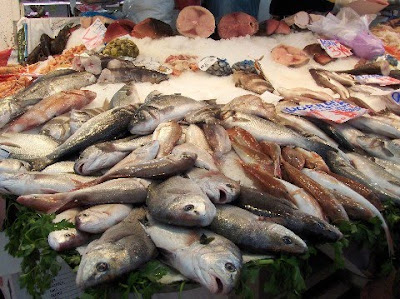 Supermarket shopping is a tedious chore,
Monotonous purchases of milk and eggs,
Gathering the essentials, butter and bread,
Tussling with trolley’s with wonky wheels,
Is no job for men, we are hunters not shoppers,
And find no solace in such a mundane mockery,
Except for one corner between the counters,
Where the secrets of the sea are revealed,
Plucked with nets from abyssal depths,
Then lain upon a bed of white ice chips,
All the precious treasures of the briny blue,
Displayed like the crown jewels for all to view.

I stop and ponder the odyssey of their arrival,
And think of the men who braved wild seas,
And cruel, howling storms to fetch them here,
Their bravery and fear, is suddenly so near,
Within the inner eye of my imagination,
I see death ride atop the towering waves,
And sea nymphs stalk the watery grave,
Seeking to steal away tired deck hands,
Who rest their weary eyes for a moment,
Whilst hemp sails strain against the gales,
On the dogger bank in midnights black,
With a sliver of moon to guide the ship back,
Through mist and storm, to bring to shore,
The golden cod and shoals of silver sprat.


The ruby gems of Jamaican Red Tilapia,
Are amongst my favourite treasures,
And those shiny ranks of silver breem,
Now at rest beside herrings on parade,
Rows of argent sea bass and pilchards,
Brown Dover sole and the silver sprats,
Ochre plaice and clots of milky herring milt
Mackerel marked with tiger stripes,
The wings of rays and monkfish fillets,
At rest between Cod roe and coley loin,
Haddock fillets and swordfish cutlets,
Whilst King Prawns and squid tentacles,
Rest in the frozen rut of a runnel,
And Devon crabs with claws that grab,
Mussels and scallops, Alaskan Pollock,
Oysters in wrinkled grey stone jackets
Scottish mussels and smoked kippers,
Lobsters locked in their scarlet armour,
Cooked cockles drowned in vinegar pools,
Jellied eels and leathery Arbroath smokies
Tuna steaks, salmon fillets and rainbow trout
A host of adventure stories for every shopper,
Unnoticed by most in their hunt for cheap products.

Posted by Defender of Liberty at 14:52

You don't use an apostrophe to pluralise! It denotes the possesive.

if one is to pluralise this, it becomes:

David's balls (no apostrophe in balls)

the apostrophe is possesive. Alternatively it can be used to shorten words eg. it is -> it's

reminds me when I took my eldest to Bridlington once, they were unloading fish in boxes and covering them with wet hessian cloth, he was only about 4 so I told him they were asleep and the man was putting them to bed.

For about two yrs afterwards he'd run up to the fish counter in Tescos and tell me the fish were tired......by age six, it was almost a ritual I'd call him over and tell him look the fish are tired till one day he told me....no dad, they're dead.


Well they've all but destroyed our fishing industry, in so doing destroying our food security and seeing as we have recently been told that our Establishment are using mass immigration to exterminate us and Europe will become Islamic within 50 yrs what ever will they Try to get rid of Next
Sex, Bacon and Alcohol no doubt.


Just like with their Gobal warming scam, ( give us the money or the baby polar bear dies ) the mass media is used to subtly steer the unthinking masses where our Elites want our society to go.