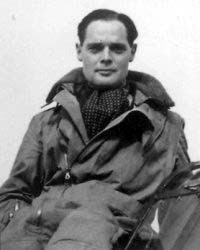 This is a brilliant post on Douglas Bader, the anti-PC spitfire pilot that the liberal historians has tried to forget and erase from history.

If Douglas Bader were alive today he would be smeared by the Nothing British About the BNP and the Tories as a 'racist' or a 'fascist' for his views and opinions, the same views and opinions held by almost all Britons in that time.

Douglas Bader would be screamed at today by the liberals and the media as a fascist if he supported Rhodesia today or apartheid.

Yet he was a real war hero.

If he saw Zimbabwe today he would be happy to know he had been proved 100 % right along with Ian Smith and the Rhodesians who were forced to surrender Rhodesia to the anti-white racist tyrant Robert Mugabe and his black fascist army and secret police.

The Tory Party of Bethell and Cameron, Osbourne and Boris Johnson is a party of toffs, fops and ponces - a party not fit to lick the boots of the heroes of the Second World War.

These were men who fought for Britain and for their families and the British people - they did not fight for mass immigration, multi-culturalism, political correctness, colonisation and globalism.

They would be in the BNP if they were still alive today and saw what had happened to this country.

Theres nothing British about the Tories - they are just another globalist party.

Second world war fighter pilots achieved celebrity status for their breathtaking skill and heroics. Probably the most famous was Douglas Bader, who lost both legs in an aircraft accident long before the war even began, but remarkably rejoined the Royal Air Force in 1939 and led 242 Squadron in the Battle of Britain."

"Bader was considered to be an inspirational British hero of the era. His brutally forthright, dogmatic and often highly opinionated views (especially against authority) coupled with his boundless energy and enthusiasm inspired adoration and frustration in equal measures with both his subordinates and peers."
Douglas Bader - Wikipedia, the free encyclopedia

"After the war he became an avid and skilled golfer, and also became involved in politics. He supported apartheid, and his associations with some on the extreme right of British politics led many to believe he was a closet extremist and racist himself."

"Never a person to hide his opinions, Bader also became controversial for his political interventions. A staunch conservative with traditional Victorian values , his trenchantly-expressed views on such subjects as juvenile delinquency, apartheid and Rhodesia's defiance of the Commonwealth (he was a staunch supporter of Ian Smith's white minority regime) attracted much criticism. His association with figures on the radical right fringes of British politics contributed to a perception that he was a closet extremist and racist - an impression that in the case of the politically unsophisticated Bader was almost certainly incorrect."
Douglas Bader at AllExperts

Posted by Defender of Liberty at 12:35