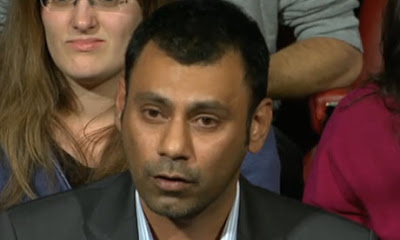 So the identity of the latest Ethnic Middle Class scumbag from Question Time is revealed.

He is the son of Indian immigrants, and appears to have a chip on his shoulder about it.

Khush Klare dared use the Race Card when he is middle class, a financial services director for the banking industry and is another well educated, well paid, proffessional simply using the race card for their own sickening political ends.

My god man, how cynical, selfish, self serving and greedy do you have to be to still play the Race Card on Question Time when you are well paid and successful and millions of white working class people live in poverty.

These Ethnic Middle Class people do not care less about the white working class.

They say 'We are as British as you' but all these Ethnic Middle Class ever do is play the Race Card for their own personal advantage and they only ever speak up for the interests of their own ethnic, racial or religious community.

The day one of the Ethnic Middle Class stands up and says 'We should stop playing the race card and start to help the most disadvantaged people in our country, the poor, unemployed, disabled, old and the white working class' is the day I know that assimilation has replaced colonisation and multi-culturalism.

But somehow this version of Britishness, where members of the Ethnic Middle Class, speak up for the interests of the white indigenous working class as well as their own communities as 'we are all British and united' never seems to exist does it.

Whilst white liberal queue up to abase themselves before any racial issue or campaign to assist non-whites, these same liberals call anyone who dares stand up for the white working class as a 'racist'.

The white liberals that arse lick every ethnic cause or campaign for the benefit of non-whites, will scream 'WWWAAACCIISSST' at anyone who dares seek to help the white working class.

" Khush Klare, 38, whose parents emigrated from India in the 1960s, didn't plan it so. But as the microphone swung in his direction he heard himself asking Griffin: "Where would you like to me go? I was born in this country. I love this country."

However, it was his subsequent suggestion of a "whip-round" to send Griffin to the south pole – "It's a colourless landscape that will suit you fine" – that proved the undoubted highlight.

Yesterday, overwhelmed by texts and emails applauding him, the financial services director, from Harrow, north London "

These Ethnic Middle Class people do not care less about the white working class.

I thought he was mixed race. Now that I know he is Indian, he could out of a spirit of generosity toward his own people repatriate to India and assist the poverty-stricken masses in that country out of the poverty trap, so that his beloved Britain doesn't have to send foreign aid to India because the Indian Gov't has all its spare funds committed to its space programme and its nuclear sub programme.

And maybe the Pope will become a Baptist.

If I remember correctly he did agree with some BNP Policies, he said Nick and his supporters should be given plane tickets to the Antartic, so he does agree that there are at least 1 Million in this country should be removed.
All that remains to be agreed, is who they should be.

He said he loves this country, what are his views on the surrender of Sovereignty to the EU or the extermination of the British People.
I think what he really means is he likes the fact that he's been able to make a lot of money here, the country and the British people and way of live mean nothing.

Why do you think he was playing the race card? He worked for his position career, like other people, studied hard, did well. The same opportunities are available to all people in this country. Not sure why you think this had anything to do with race and cards. If what you say is true, all white people would be in the gutter and all "ethnic" people would be middle class with overpaid jobs. And you can't assume he doesn't care about people less well off than himself. You have no evidence for that.

i have his ticket! and orders to stop the £895 million a year aid to his home land