Its the ELECTION stupid ! 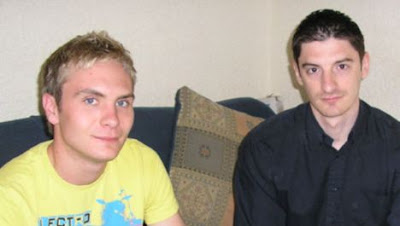 
A few days I blogged that the Murdoch owned media had launched an anti-BNP offensive in order to support the Tory Party in the lead up to the General Election.

Now it appears the big guns of The Daily Mail have been brought to bear on the BNP as well with the most pathetic salvo yet, with some 'exclusive story' about how the BNP's most secret undercover activist Mark Collett, a young man with no previous media coverage, was deployed with Joey Smith, another undercover BNP activist, to give an interview to the BBC.

Damn it - whoever in the BNP thought up this cunning plan to infiltrate our two most least known members into this BBC interview was spectaculary foiled by the amazing, brilliant and ground breaking research of the reporter who wrote the story.

I am being sarcastic by the way.

Here we see another example of the corporate media backing the Tories.

The strategy is simple - the media know that Cameron will not win a massive majority, he will win enough seats barely to take power with a Tory government or he will have to organise a deal with the Ulster Unionists, independents and Liberals.

Therefore the Tory press have to attack the BNP in order to try and drive wavering voters back into the clutches of the tories.

This is why the corporate media owned by the media barons and aristocrats like Rothermere are attacking the BNP, in order to ensure the tories stand a chance of winning.

Expect to see more it of it.

What should happen is that each time the Tory Media attack us we have on our website an attack story back - preferably one about Rothermere himself and his shenanigans and if not his papers.

I have thought of a slogal to use against the Tories in this election.

I offer it for free ;

This is because the the Tories have stated that rather than ;

1) Withdraw from the EU and save 118 Billion per year

6) End the wars and return the troops home

That they will instead cut welfare payments for the poorest in our society - the disabled, the unemployed and the impoverished - those who are the victims of the bankers and Zionist hedge fund speculators who fund the Tory Party.

The Tories will cut benefits for the poor whilst increasing welfare payments to the bankers.

This is because if you vote Tiory then you you better not lose your job, your kids better not leave university with massive debts and better be able to get a job, your parents must have plenty of savings to pay for health care otherwise Osborne will charge you eight thousand pounds for what they have been paying for all their lives through National Insurance payments or they will take their house from them and dump them in a nursing home where they are drugged into silence as the cash is taken from their bank accounts.

Thats the future if you vote Tory - a future of the poor getting poorer, the rich getting richer, the bankers on welfare payments from the Tory government paid for out of your taxes, a future where old people who have worked all their lives are then forced to sign their homes over to the government or lose their health care, a future where the disabled have their benefits cut to subsiside the Zombie banks.

Thats why the corporate media are attacking the BNP - as they are the rich and powerful and the enemy of the ordinary, everyday British people.

I used to beleive that our secret weapon ;0) ,Marc ;was an Arrogant, self centered toss, after seeing him speak at the RWB I have changed my views.
He is the Nutz,with true heart and that's what makes him a weapon, I no longer consider him to be a toss or self centered !!.

He has every reason to be arrogant ;o)

The Tory's know to well that middle Britain know UAF Cameron is a Liberal Ponse, who is undeniably in bed with Marxist ,Commie filth;Infact he is Liberal Marxist filth !!

Once before Conservatives tricked the Middle English Nationalists with Thatchers promise, they wont buy it for a second time, this is our era and the near future will show it well.

Make no mistake, the Tories are going to win the next so called 'election'. It's totally rigged anyway with FPTP and the controlled media pulling the strings via their Zionist masters. The hidden hand know the people have had enough of Labour and will replace them with Blue Labour aka the Tories.
The actual vote will be a mere but expensive sideshow to deceive people into thinking that their voice counts. It doesn't and hasn't for some time. Where I live for example, any vote except a Tory vote will be a totally wasted vote. That is NOT democracy. EVERY vote should count, except that is, the vote of the invaders and those phoney Britons who have no right to determine the destiny of the indigenous majority. True nationalists should not take part in this fake democracy but wait for battle to commence as it surely will.
Then, once battle commences, go after the Zionists who have made it happen and not the innocents like ordinary Jews and Muslims. Go for the Communists and their trades union lackeys. We all know who they are. Go for the media swine who have tried their best to abort a once proud nation. Go after the monstrous teachers who have defiled the minds of innocent toddlers with sexual monstrosities.
Go after anyone but the totally innocent white, black, brown, yellow, Christian, Jew, Muslim, Sikh, etcetera, who is as much a victim of these Zionist swine as the indigenous of Britain.

In reality we are wasting our time to believe for a second, it will come down to the ballot box.
It will come down to basic human instinct and that is anger; as soon as they ban the Nationalist parties, the anger will turn into dispare.This dispare will turn restlessness and the shit will hit the fan big time and we, the angry restless shit catchers are a big majority.
The next shares I will buy will be Rope shares and hope I will have the top job :o)