You Cant Win A Rigged Game 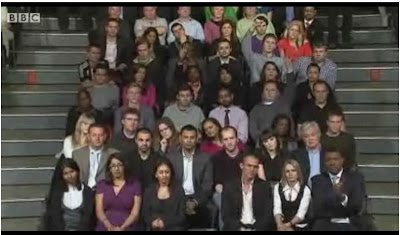 Image - 'Impartial BBC panel - over 42 % ethnic minority when the actual population level is 9 %. That is not a representative panel, that is a rigged panel.


The simple fact is you cant win a rigged game.

When the whole panel, the whole audience and the host of the show are rigged to attack just one person, then they cannot win the game.

Therefore the strategy as regards playing the game is to simply exploit the publicity and to allow the real extremists demonstrate to the public just who they are.

Three police officers have been injured tonight outside the BBC building.

There have been yet again public order arrests.

Yet the only person who has remained calm, reasonable, able to take the abuse and give it as well as take it - has been Nick Griffin.

He has been the rock in the centre of the storm.

People will have noticed that.

The hysterical rants of middle class blacks in the programme against Nick Griffin which appear to be flourishing as clips on the news sites will repulse ordinary British people.

The fact that middle class blacks in the UK still play the race card should be a source of personal shame for the ones that do - they should get a train to some of the Northern ex-mining towns where whites are forced to live like Native American Indians on reservations, and see what real poverty, alienation and social deprivation are.

The fact is such people would of course attack Nick Griffin - they would do wouldnt they.

The day I see an naturalised British citizen of immigrant stock supporting immigration controls, removing illegal immigrants, an end to multi-culturalism and that British culture should replace multi-culturalism is the day I will believe in the myth of assimilation.

Such displays of contrived self serving hysteria by the exquisite metropolitans, multi-culturalists and middle class liberals will appeal to the metropolitan elite, but will repulse the real people of Britain.

Nick Griffin did not foam at the mouth.

He did not howl at the moon and bite the heads off of jellybabies.

He came out as the ONLY one with any integrity.

Today we have seen the extremist thugs, the liberal establishment and the BBC rig the whole thing in order to try and reveal Nick Griffin as some insane, snarling, wolfman of monstrous fascism.

All they have done is make him seem the only one who has kept his cool.

No Platform is now down.

We will of course now start to get more media exposure and therefore become better at media presentation.

He has walked out of that interview with his head held high.

Now comes the real revolution, the fact that No Platform means we can reach the people directly instead of having to go through the media.

That is where the real revolution will be - not in the TV shows of the BBC but wherever a crowd or meeting will gather to hear what we have to say.

The media have announced to Britain that we have something to say.

Now the people will want to hear it.

Thats when the real revolution begins.

This is just the first step forward.

We always knew, as the insane liberal idiots did, that no mass fascist uprising would occur.

A layer at a time all the lies of the liberals are being exposed.

This tonight was the start of the process, the first step on the path to power.

Posted by Defender of Liberty at 13:44

Police injred well they KNOW what the union/labour/tory uaf et al DO but they were allowed to 'demonstrate', but the police do the Establishments bidding.

What you have described is what was expected. We the British indigenous people have a right to our own country and culture and NOT be a minority in our own country , its not racist.

I am about to watch the broadcast.

I agree with you Lee, to an extent.

That the QT programme and its entire set up was a ..lets throw sponges at Griffin festival. As usual with these things the BNP philosophy gets side tracked to one thing, and that of race/immigration.

When over half the bloody programme concentrated on what Nick Griffin was meant to have said or not about true quotes, mis-quotes or lies presented by a bastard, incestuous media without any recourse for difference from the accused.

Griffin did the best he could with the multi pronged attack and interjection (not least from DimDumble). Griffin remained calm, made some sharp points.

It remains to be seen if, as you think, that it starts a 'revolution' and that the British don't like 'bullies'. I am not so sure - such as how people are nowadays. I do believe they love a bogeyman though.

Clearly a QT audience represents no one other than those that are bothered to attend - usually those fucking fuckwitted professional student types, an assortment of the petty thinking.

Just a point though Lee. Could you define and why you often use the terms middle or working class? To me it sometimes sounds like 'class war'.

I am know some so-called 'middle' class vote BNP for they also see the way this country is. They also do not like paying for their own demise too by way of tax.

At least one of the audience agreed that there are some in this country that ought not to be here, he said that Nick Griffin and his supporters should be given plane tickets to Antartica.
It might not be a bad idea, bit cold perhaps but if the Sleepy, Trusting, Gullible British sheep don't wake up to what the Communists are planning for them and their children.
Frostbite might be preferable to the cultural revolution that is being orchestrated.

Class? My wife is a cleaner and i struggle to find any work i can. Yet we worked our guts out to get a good education for our kids.
They went to Uni, one Oxford, got degrees. Now they mix with top professionals even royality.
What am I? what are they?