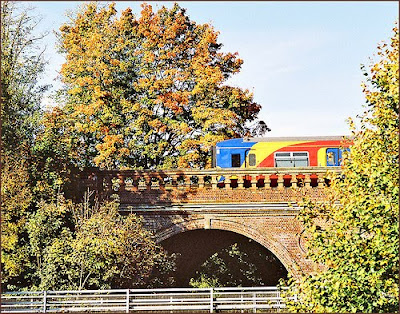 Leaving the underground with a shudder,
Wet with sweat from its sultry embrace,
As if I had just left the arms of a lover,
Up the escalator that clunks and clatters,
I ticket a barrier and dodge the flaps,
That usually shut like a trap upon me,
And walk into bedlam where sanity flees,
Amidst crowds of constant thronging,
Some are arriving and some are leaving,
Forever bustling with their baggage and cases,
Sipping lattes and mumbling on mobiles,
In languages I have never heard spoken,
The babbling of this new Babylon,
And I check the boards for Birmingham,
Waiting for the numbers to change and name,
The stall where my train waits upon its buffers.


I check the time and my laces, getting ready to run,
Against a host of strangers for a window seat,
One, two, three, GO, but without a gunshot,
I sprint down platform six like Steve Ovett,
Beaten by old lady’s who must do marathons,
As breathless I press a button, which with a hiss,
Of sibilant steel, slides the door open,
And take my prize, a window seat,
Where I sit in a golden slant of effulgent sunlight,
That falls through clouds from a furtive sun,
Reading yesterdays Metro left on a seat,
Waiting for the 09.50 from Marylebone,
To shrug and swiftly thrust its way into the tunnel.


Finally the train trundles out of the city,
On a trickle of tracks that grumble,
Away from all the concrete and graffiti,
Which urban idiots piss like dogs,
Upon the face of their own city,
Marking a territory until a bullet,
Topples them and a new top dog takes over,
No loss I suppose, except for their mothers,
But never mourned by folk like me,
Who see their fall as our salvation,
Out now from the stink and the rush,
Out now from the clamour and crush,
The train starts its acceleration, rushing,
Out into the countryside, where killing,
Has a reason other than for a reputation.
And the hunter has the respect of nature,
Not just from dogs that wear human faces.


Soon I feel the tension ebb from my neck,
As the high sky reclaims the horizon,
From the tower blocks and buildings,
The hopeless cages of urban living,
Where society has become a prison,
And I adore the brash, brush of autumn,
That paints England with a palette of ochre,
For as summer fades, she bestows a gift,
Of groaning October after Septembers kiss,
With musk of mushrooms, mist and moss,
That slips in each time the train stops,
On the morning air awing with kites,
I watch their fiery wings reflect the light,
Feathering god in graceful ascensions,
Whilst a pheasant struts between the stalks,
Of a field that flashes by in a mottled blur,
As pompous as a fat banker in its finery,
Amidst plump orange pumpkins that await Beltane.


A herd of wild deer dot the distant fields,
Feeding in fields still green with grass,
Not raising their antlers at the tractor,
Whose rasping plough scores the earth,
Rending the roots and opening its purse,
For a flock of thieves who picks its pockets,
Their cries of joy, a simple sonnet,
Drift in through a slit of open window,
Whilst from opal sky, a gourd of cloud,
That rattles with hail, rushes on by,
Filling dry streams with it sudden rain,
Now gurgling forth from gushing drains,
As we pass the place where old fox sleeps,
In warm bliss beside the embankment,
Safe now from the master and dogs,
He mocks the huntsman with his smile,
As russet joins the rush of gold,
Scarlet blushing, stripping the trees,
Where berries so black and sweet,
Tempt the pigeons to pluck and eat,
Amidst the wilt and droop of leaves,
Whilst down the line we rush,
As autumn locks away the last of the light,
One empire falls and now winter rises,
As death returns to haunt in all its guises,
And Moor Street station ends the narration.

Posted by Defender of Liberty at 14:29

Brilliant and totally captivating, I could feel myself on that train :-) I was disappointed when it ended.

I'm a Nationalist Middle Class and have had many opportunities to go and work in London but I turn them down every single time. Each time I visit I feel I'm going into some weird expensive multicultural place where I'm not felt very welcome or at home. After graduating I went for interviews with investment banks but didn't get a job, I was not interviewed by any white Briton and those places were full of ethnic minorities of all nationalities. What do they care for our economy, our pensions, our investments, our stock market? Only what they can get out of them, to hell with us indigenous Brits who pay into such things.
On a side note, I once travelled from Paddington(?) to Reading and one of the train stations starting with S (I forgot, sorry) also had the name on the platform sign written in something arabic. I concluded this must be an enriched area. What a disgrace to England that is.

Good poem. I also like the Lion and the Ambush.

I think the BNP should make more use of the alternative media to get the message across.

UKIPS Farrage and Marta Andreason have been interviewed on www.redicecreatons.com Could be a good idea to get Nick or another BNP spokesperson on the show. The interviewer Henrik seems like a clever chap and you would be guaranteed an unbiased platform.

You should also check out Henriks interview with Anthony Peake, I think you would like that, giving your interest in gnosticism.