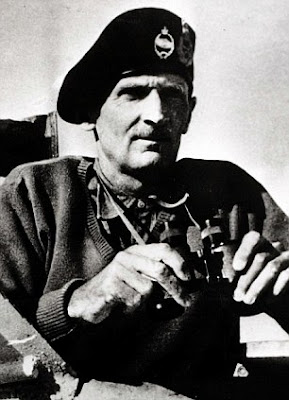 The reputation of Britain's most famous wartime general, Field Marshal Viscount Montgomery of Alamein, has been dealt a new body blow by the disclosure of secret papers revealing that he advocated a racist imperial "masterplan" for post-war Africa.

As Chief of the Imperial Defence Staff in 1948, "Monty" secretly submitted a serious plan to turn the continent into a white supremacist bulwark against the "very great potential danger" of a well-organised and growing communist movement in Africa.

Monty supported apartheid in South Africa and considered the African to be "a complete savage".

He also spoke out against the legalisation of homosexuality and was opposed to Britain's membership of the EEC.

Here is another hero the liberals and the simpering chinless idiots like Bethell in Nothing British About The BNP will call a 'racist and a 'fascist'.

Anyone who disagrees with a liberal is defined as a fascist or a racist by the liberals.

Posted by Defender of Liberty at 14:49

Hello Lee,
Wanted to get your take on this.

Most of this Tory gangs video's contain several images belonging to the BNP(I think)Is this correct? Can I justly make a claim for copyright on those images and election material produced by the BNP?
Usually I do video's that have been nicked and re-edited, this is a first that contains images only.

" You have several images contained within your video's that are the intellectual copyright of the BNP including the logo BNP. Kindly remove the videos containing these images or we will issue a notice for damages and a copyright claim against your account."

You can email me direct at
copyright@bnptv.org.uk