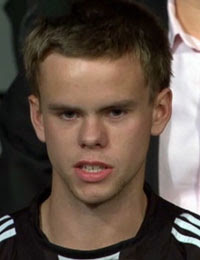 A NORTH student has told of the nerve-wracking moment he quizzed BNP leader Nick Griffin on national television . . . and how protesters almost stopped him.

Yet the physics student, of South Shields, South Tyneside – persuaded by friends to wear his Newcastle United shirt for his appearance in the audience – almost missed out on the chance because of the hordes of demonstrators.

He put Mr Griffin on the spot by asking: “Given the Second World War was fuelled by the need to disarm racist regimes, is it fair the BNP has hijacked Churchill as its own?”, and the politician responded by saying his father had been in the RAF during the war.

Now studying at London’s Imperial College, the former St Aidan’s School pupil told of his excitement at appearing on the carefully-orchestrated show, filmed on Thursday at BBC TV centre.

Posted by Defender of Liberty at 04:19

Quite from the middle class scum: "Given the Second World War was fuelled by the need to disarm racist regimes, is it fair the BNP has hijacked Churchill as its own?"

This is typical delusional history revisionism of the lunatic left, they also believe that WWII was fought to defend the Jews.

So just who 'owns' Churchill?

The old gangsters don't. They couldn't stand in his shadow.

The EU doesn't. Churchill was against our absorption into the EU.

The multi-cultis don't. They weren't around in Churchill's time.

The Marxists don't. Churchill only tolerated them because like Broz (Tito) some of them were prepared to kill Germans in WW2.

The BNP is the only political entity in the UK today that is actively working to sustain Churchill's vision for this nation of aspiring not to serfdom in continental Europe but towards "the open sea" as a sovereign, independent nation together with the Old Dominions (regardless of whether or not Churchill's great-great-great several times removed grandmother was part Seminole, Iroquois, Cherokee or whatever).

No-one has a greater entitlement to the commemoration of Churchill's WW2 stance than the BNP. Anyone who doesn't like that assertion can choke on it.

Another thing about the Indian who wants to deport all British nationalists to the South Pole.

On the basis of 'equality,' therefore, that now entitles a BNP Government to transport him and all his 'I-love-Britain-for-the-dosh' friends to the same place. Let them set up base camp on McMurdo Sound or somewhere similar. What's good for the goose etc.

Apparently both the former Archbishop Carey and HM QE2 herself have maligned the BNP in the last 24 hours.

Carey is a craven apostate who is probably smarting* from the BNP's excellent Judas Archbishops leaflet, a copy of which I saw recently. I don't know who put it together but they did an excellent job.

*Like Mel P after the drubbing she got from you, Lee, on The Moral Maze a while back.

HM QE2 has broken her Coronation Oath times without number. She no longer warrants the allegiance of her subjects.

A BNP Government should remove her - courteously - to the Bahamas for lifelong exile, like Churchill (none other) did with her treacherous Uncle Edward VIII in WW2.

I'd like to see Nick installed as the new Oliver Cromwell until the real Oliver gets back at the Second Advent. Then you'll see some real 'community cohesion' though not for any 5th columnists trying to dismember Britain.

I also did some checking on JS's remark about the Peronne CWGC. He was referring to the La Chapelette British and Indian Cemetery which contains 577 graves, 320 being Indian. It is possible that many of these men were from the Indian Regular Army 5th Mhow Cavalry Brigade which made a valiant but costly charge at Cambrai in December 1917.

But what Jack didn't mention was that, though relatively few of them are buried in the La Chapelette Cemetery (about 20+), the bulk of the Indian war effort in WW1 came from the Sikhs, not JS's (and Baronness Warsi's) beloved Muslims. As one commentator states, "It was the estimate of Sir John Maynard that the contribution of the Sikh community in men and material was ten times that of any other community of India."

Yet I understand that Sikhs, particularly young girls, are targetted as much by Jack's (and B W's) beloved Muslims as are whites, which is ironic.

On the whole, it seems that the Muslim contribution to the Allied cause in WW1 was muted, as was the entire Indian contribution apart from the outstanding efforts of the Sikhs - who weren't represented on Thursday night, as I recall. The main Muslim effort went, as indicated, into helping the Central Powers via Turkey, along with the massacre of 1,000,000+ Armenians, which has also been mentioned.

We might add that the Indian Regular Army as such wouldn't have existed at all to make its WW1 sacrifice if not for the British Raj, an aspect of colonialism that Jack and B W no doubt despise.

(Jack also forgot to mention the Indian National Army (known as Jiffs), of WW2, which made a significant contribution to the war in Burma - for the Japanese. Selective amnesia again, I guess.)

But the CWGC figures from the Commission's latest annual report, Finances, Statistics and Services.pdf are interesting, for WW1 and WW2. You can get a copy of the report by emailing the CWGC.

I give below the totals for both world wars, for Britain and the largest of the Old Dominions and Undivided India, for Identified Burials and Commemorated on Memorials.

Now, without detracting at all from the memory of any of the brave ones listed above, regardless of race and nation, think of the relative populations of those nations in 1914 and 1939. That of Undivided India would have drawfed those of the other 3 nations put together.

So who really loves 'freedom' and 'the old country'?

That Indian who professed such and wants us all dumped at the South Pole should be told in no uncertain terms where to stick it.

Are you sure on collaborator and Judas Oliver Cromwell.....The rot started with the Prig.


A stable Christian society of ancient traditions binding the Monarchy, Church, State, nobles and people into one solemn bond was disrupted by Calvin’s Protestant uprising. The Jews of Amsterdam exploited this civil unrest and made their move. They contacted Oliver Cromwell in a series of letters:

Cromwell To Ebenezer Pratt of the Mulheim Synagogue in Amsterdam,
16th June 1647:
— “In return for financial support will advocate admission of Jews to England: This however impossible while Charles living. Charles cannot be executed without trial, adequate grounds for which do not at present exist. Therefore advise that Charles be assassinated, but will have nothing to do with arrangements for procuring an assassin, though willing to help in his escape.” —

To Oliver Cromwell From Ebenezer Pratt, 12th July 1647:
— “Will grant financial aid as soon as Charles removed and Jews admitted. Assassination too dangerous. Charles shall be given opportunity to escape: His recapture will make trial and execution possible. The support will be liberal, but useless to discuss terms until trial commences.” —

Cromwell had carried out the orders of the Jewish financiers and beheaded, (yes, Cromwell and his Jewish sponsors must face Christ!), King Charles I on January 30 1649.

People are well aware of BNP stance on Immigration, trouble is that's all most know, and as question time showed, the establishment are not going to allow other policies to be revealed.
I think this can be sidestepped quite easily with some good quality dvds talking about ALL BNP policies.
you can get 2-3 hrs of video on a dvd far more info than you can on a leaflet.
Get every activist to make 50 ( about £10 for 50 blank dvds ) copies, and just post them randomly through letterboxes....

they are far more likely to be passed around than leaflets, better yet, the information comes from the Telly, so it must be true, its on the Telly !!!!!!!!!!!!

IE use the NWO Brainwashing to spread the truth rather than the lies it normally spreads.

10,000 DVDs out there being passed around could end up being seen by well over a million who wold normnally never get to see BNP message.
and there is nothing they can do to stop the truth spreading.

This could open up another front in the information war...

Oh yes, one thing, you must put the messaage on the DVD

otherwise straight after watching, it will be put in a draw and they will switch Big Brother on and that's it....

Re: Cromwell, he disposed of a corrupt, self-serving parliament in 1653.

Seems like a good idea for the present day.

Come now, all this Middle class bashing is beginning to sound like something a Communist would say.