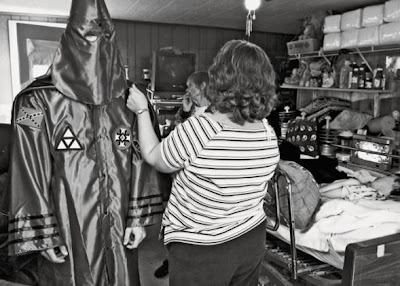 Image - Ms Ruth making robes for Klan leader. Her disabled daughter is on the gurney to the right of the image.


I am no fan of David Duke as anyone knows.

He is a talented writer, a forthright and interesting political polemicist and seems to have an engaging personality that wins him many admirers - but at heart the man is a sleaze.

Anyone that would take their followers money and spend it on lap dancers in casino's is not a man who can be trusted.

The leaders of nationalism must repudiate and despise the accumulation of personal wealth as a motivational factor both personally and as an ideological goal.

Nor am I fan of the KKK.

They were an Anti-Irish, Anti-Catholic, Anti-Slavic racist organisation as well as being Anti-Semitic.

Being of half English and half Irish Catholic, Keltic stock I would have been about as welcome as Obama at a KKK barbecue and cross burning in the 1930's.

I also think that David Duke is essentially totally wrong about his central thesis, which is that the Jews are responsible for the downfall of the WASP elite in the US and the West.

Though academics like Kevin McDonald reveal the ethno-centric activities of Jews in America to build, protect and strenghten their community ties, his work reveals primarily where the far right have gone wrong.

Rather than attack the Jews as a race, religion, media, economic or political elite and for being more intelligent than us, what we should be doing is emulating them.

The white race has been the architect of its own misfortunes, for it has never had the consciousness of being a community.

That such an ethnic or racial consciousness is essential, in a multi-culturalism system predicated on the basis that every ethnic, racial and religious community has the right and duty to form groups that represent them as a community in order to gain legal, economic and social recognition of issues relating to that community, is obvious.

But we have never done that.

White majorities in our white nations voted for political parties run by our fellow whites who then betrayed our people and nations.

Therefore we are the architects of our misfortune, for the price of the multi-culturalism and selfish individualism created by the political parties we voted for is the destruction of all our own white indigenous communities.

But Nick Griffin was right about what he said about David Duke and his branch of the KKK being non-violent ;

Knights of the Ku Klux Klan

In 1974, David Duke founded the Louisiana-based Knights of the Ku Klux Klan, a Ku Klux Klan group, shortly after graduating from LSU. He first received broad public attention during this time, as he successfully marketed himself in the mid-1970s as a new brand of Klansman — well-groomed, engaged, and professional. Duke also reformed the organization, promoting nonviolence and legality, and, for the first time in the Klan's history, women were accepted as equal members and Catholics were encouraged to apply for membership.[40]

Therefore Nick was right - and Bonnie Greer, with all her arrogant interruptions was wrong.

The epitome of arrogance is to assume that just because you are from an ethnic minority, that makes you an expert on things like the KKK in America.

Bonnie Greer is not an expert on ' The ideological underpinings of the American Far Right and its organisational and ideological restructuring over the last fifty years'.

It may seem to you as an individual that even attempting to undertake a 'Makeover' for the KKK is a pretty stupid thing to do. But that is what David Duke tried to do.

He really did try and do a 'Gok' on the KKK.

In many ways the work that David Duke did with the KKK was commendable.

He transformed it from a sectarian anti-Catholic, Anti-Irish and violent group to a white nationalist group which now employs carers of disabled white people to produce its robes and ceremonial items, thereby keeping some of the most disadvantaged people in the US white working class above the poverty line.

The photographer Anthony Karen has written about this in the article above ;

" Karen’s photographs show an entirely different side of the far right. He presents a 58-year-old, fifth-generation seamstress he calls “Ms Ruth” and he has photographed her running up an outfit for the “Exalted Cyclops” or head of a local KKK chapter. She gets paid about $140 for her trouble. Karen tells us that she uses the earnings to help care for her 40-year-old quadriplegic daughter, who was injured in a car accident 10 years ago. "

Even the KKK are human after all.

They even burnt environmentally friendly crosses ( shakes head. I know. I know )

So David Duke is not the devil.

Neither is he a Martin McGuniess or Gerry Adams who have killed, and ordered killed, innocent men, women and children.

Nor is Duke a Blair, who started illegal wars and murdered a million Iraqis.

Nor is he a Bush who legalised torture, concentration camps in Cuba and extraordinary rendition.


The primary problem is that the people Nick has to debate with are ignorant.

They only know what they have been told by the media.

No-one in that audience knew anything about the KKK, David Duke or the history of both those things.

They hear KKK and then think 'KKK = lynchings, racism, that film with gene hackman set in the 1960's that was long and shit, Denzil Washington, KKK not nice, BOOOOO'.

That is essentially all they know and how their thought processes evolve in relation to media conditioning.

Therefore they are, essentially, stupid.

Nick says the truth which conflicts with the lies they have been told by the media.

So they believe the lies, even when they are being told the truth.

David Duke and his 'cuddly' version of the KKK is the truth.

Now its time for the stupids to admit they were wrong.

Posted by Defender of Liberty at 06:43

Every day in the USA thousands of white women and girls are raped, tortured and mtilated by blacks.
How many black women are similarly treated by whites?
How many negroes were actually. provably hanged by the KKK in its entire history?
Blacks were an integral part of the deep south community. It would have been very difficult to get away arbitary lynchings.
Incidentally, they were lynched for raping and murdering white women, and some of the lynchers were blacks.

Strange this Bonnie woman,the comment on human's after the ice age birthed from the south then moved north ? After the ICE age surely the pigment colour in the human skin was anything but black !
Why is it that many black people are so proud of the 'Afro-Carribean' tag,yet they get annoyed by the white people of Engand,Ireland,Scotland,Wales,talking of their history,and their Home country with equal,if not more educated comments.Yes Afro-Bonnie,AS IN ANGLO.

Would Bonnie agree that the Chinese do not have a right to an Identity.
Or the Japanese.

She's part of the Genocidal intent of the NWO, intent in taking down Western civilisation, the trouble is, she does not know this.


Genocide and the Deliberate Destruction of Great Britain

Lee, another outrageously brilliant post. Though I must admit each time I read your posts I weep at how much I had also fallen for the media lies, how conditioned I had been that I must have been a racist for daring to find multiculturalism and its effects to be wrong. Keep it up, I will read your blog every day it is like a breath of fresh air sweeping through my mind to wake me up and get on with my day. Bravo, brawd.