The Mark and Joey Story 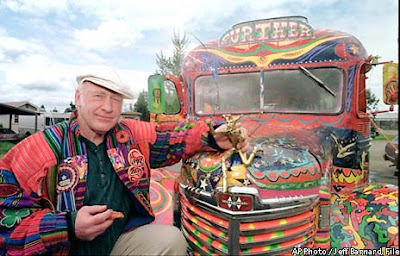 Image - Ken Kesey, the author of One Flew Over The Cuckoos Nest and whose involvement with the CIA run Project MK Ultra where the CIA gave him LSD resulted in the liberal counter culture of the 1960's exploding into the cultural mainstream of American life.


It is not often a news story defines the Zeitgeist of an era.

One such story is the 'Joey and Mark' story - even though it has an exceptionally gay sounding title this is not actually a gay marriage story.

This damned story is so bright, its given me a migraine.

Its a psychedelic press debacle, the Electrik-Kool Aid test for the modern media merry pranksters.

Ken Kasey, a man I consider one of the most successful peaceful revolutionaries in history alongside Christ, Buddha, Gandhi and the Roman poet Horace, would be proud of this planned insanity.

The ashes of Timothy Leary will be tumbling with laughter in orbit.

The very fact the media have failed to analyse their exact positions is hilarious, as for instance ;

1) The idea that a democracy must be 'rigged' to ensure that certain opinions that conflict with the liberal opinions of minuscule self appointed social elites are either denied a platform or that if aired, they must be attacked is evidence that the very basis of our democracy has been eroded.

If the liberal system is so weak that a true fascist uprising may occur at any moment if a single inflammatory opinion gets on the airwaves, then the only thing we can blame is liberalism for this crisis. Liberalism and liberal values are responsible for the fact that our society is so polarised on the grounds of race that only repression of democracy and free speech is the way to keep order, not the BNP.

In fact the mechanism of liberalism has produced the worst of all possible worlds.

Liberalism itself has laid the foundations of a fascist 'uprising', or so it keeps telling everyone as justification for its fascist repression of democracy and civil rights such as free speech, at the same time it has adopted fascist methodology to deny and usurp free speech and democracy.

It has adopted the terrorism of the word used by fascism - except now the epithet 'Jew' has been replaced with 'Racist'.

This is classic fascist terrorism - the same as experienced by Jews in Nazi Germany.

The irony is of course, as Churchill wrote, that the 'New Fascism will be anti-fascism'.


2) That when a nationalist party, called 'racist' by the media and liberal elite, is entitled to appear on the media because of the impartiality rules on the BBC, a public broadcaster which is supposed be politically neutral but which bans BNP members from working for the BBC, that such an appearance must be met with public demonstrations, protests from the audience and an anti-BNP rigged panel designed to rig the anti-BNP debate for a rigged anti-BNP audience.

This is a pathetic joke.

This also shows how terrified the liberals are.

The only reason why the liberals are in power, and the political parties that are in power, is because the corporate media put them there.

The minds of the mass of the public are merely putty for media propaganda to mould and manipulate.

The moment that the message from the BNP is able to be beamed into the minds of the British public, then the system controllers know that this could 'change minds'.

Changing minds is the dangerous power of the media WMD, those Weapons of Mass Deception (as Tony Blair once called them).

The system controllers rely on all parts of the media propaganda matrix reinforcing the propaganda of all the other propaganda producers - they all have to agree on the BNP being 'bad' and actively pumping out anti-BNP propaganda to get the public to believe this, and this porcess is called 'Consensus Building'.

The public are taught what to think within a paradigm of accepted opinion and anti-opinion.

Left, middle and Right of any debate is held by the system, and anyone who steps over the lines defined by three is denied the right to a platform by the system -or have to be attacked by all parts of the system simultaneously in order to counteract the message.

This is not democracy.

This is mind control.

An individual is not capable of being an individual if their opinions, ideas and values are simply decanted into them via media conditioning.

That is a state of mental slavery.

The irony being of course that people like Ken Kesey ushered in the era where the Hippies became liberals and then the liberals became Fascists.

Switch Off Your TV's.

Switch On Your Mind.

Rise Up And Revolt.

Posted by Defender of Liberty at 08:19