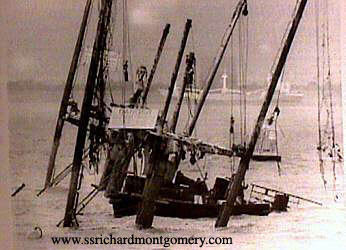 There are two things that define both Kentish Men and Men of Kent over the age of 40.

The first is the memory as a child of waking up in the morning to the air raid sirens of Chatham Dock Yard calling the workers on to their shift.

The second is going for a walk in Allhallows and seeing the ghost of the Richard Montgomery.

I used to be fascinated by the ship.

From the waters their still rose the rusting remnants of the WW2 Liberty ship that had sunk during a storm.

Today the wreck is barely visible, but its danger still threatens the whole area.


The proposed new floating airport in the Thames will not be built as in order to do so the wreck of the Richard Montgomery would have to be cleared of the explosives still on board.


This would cost around a billion pounds to do so safely - especially as rumours abound that nerve gas and other weapons are on the wreck.

If the wreck ever blew up then the explosion would be immense.

If they started to interfere with the wreck then it could explode anyway.

If Boris builds the airport then the wreck will have to be cleared.

Therefore the way to ensure the aiport is not built is to emphasise the dangers of the Richard Montgomery to the people in the area, planes coming into the area and the millions of passengers that would use the facility.

The SS Richard Montgomery was an American Liberty ship built during World War II, one of the 2,710 used to carry cargo during the war. The ship was wrecked off the Nore in the Thames Estuary in 1944 with around 1,500 tons of explosives on board, which continue to be a hazard to the area.

When it arrived off Southend, it came under the authority of the Thames naval control at HMS Leigh, located at the end of Southend Pier. The harbour master, responsible for all shipping movements in the estuary, ordered the Montgomery to a berth off the north edge of Sheerness middle sands. On 20 August 1944 it dragged anchor and ran aground on a sandbank around 250m from the Medway Approach Channel,[1] in a depth of 24 ft (7.3 m) of water. The general dry cargo liberty ship had an average draught of 28 ft (8.5 m); however, the Montgomery was trimmed to a draught of 31 ft (9.4 m). The ship broke its back on sand banks near the Isle of Sheppey, about 1.5 miles (2.5 km) from Sheerness and 5 miles (8 km) from Southend.

A Rochester-based Stevedore Company was given the job of removing the cargo, which began on 23 August 1944, using the ship's own cargo handling equipment. By the next day, the ship's hull had cracked open, causing several cargo holds at the bow end to flood. The salvage operation continued until 25 September, when the ship was finally abandoned. Subsequently, the ship broke into two separate parts, roughly at the mid-section.

Due to the presence of the large quantity of unexploded ordnance, the ship is monitored by the Maritime and Coastguard Agency. In 1973 it became the first wreck designated as dangerous under section 2 of the Protection of Wrecks Act 1973 and there is an exclusion zone around it monitored visually and by radar.[1] The Maritime and Coastguard Agency nevertheless believe that the risk of a major explosion is remote.[2] The UK government's Receiver of Wreck commissioned a risk assessment in 1999, but this risk assessment has not been published (as reported in the New Scientist, 21 August 2004). The Maritime and Coastguard Agency convened with local and port authorities to discuss the report in 2001 and concluded that "doing nothing was not an option for much longer."

3,173 tons of munitions containing 1,400 tons of TNT remain on the wreck[citation needed]. According to a 2000 survey by the United Kingdom Maritime and Coastguard Agency survey [2], the wreck still contains:

According to the same survey, the total explosive weight on board is 1400 tons.

One of the reasons why the explosives have not been removed was the unfortunate outcome of a similar operation in July 1967 to neutralize the contents of the Kielce, a ship of Polish origin, sunk in 1946 off Folkestone in the English Channel. During preliminary work the Kielce, containing a comparable amount of ordnance, exploded with force equivalent to an earthquake measuring 4.5 on the Richter scale, digging a 20-foot (6 m) deep crater in the seabed and bringing "panic and chaos" to Folkestone, although no injuries.

Critics of government assurances that the likelihood of a major explosion is remote argue that there is a possibility that over time a partially flooded fuse in the 2600 fused fragmentation devices may become less stable owing to its lead azide constituent reacting with water vapour (rather than liquid seawater) to form hydrazoic acid. This could then react with copper in the detonating cap, to form extremely sensitive copper azide.[4] A knock, such as caused by the ship breaking up further, or a collision on the busy shipping lane, could cause the copper azide to explode, triggering an explosive chain reaction resulting in the detonation of the bulk of the munitions.

Similarly, when the condition of the munitions was originally assessed there was concern that copper azide would be produced through reaction between the lead azide and copper from brass fuse components. The Maritime and Coastguard Agency argue that the fuses will probably have been flooded for many years and consequently the hazard is insignificant since these chemicals are water soluble[5] and will have been washed away.

The wreck site has been surveyed regularly since 1965 to determine the stability of the structure, with the most recent diver survey being completed in 2003.[6] There have been subsequent high-resolution multi-beam sonar surveys in 2005 and September 2006 which have confirmed that no significant movement of the wreck has taken place recently. The Department for Transport has stated that it also needs to commission a survey of the munitions still on board; this survey has not been done yet.

The increasing calls for a new airport in the Thames estuary would mean a solution would have to be found for removing/making safe the wreck, should the airport be built.[7]

Posted by Defender of Liberty at 14:34