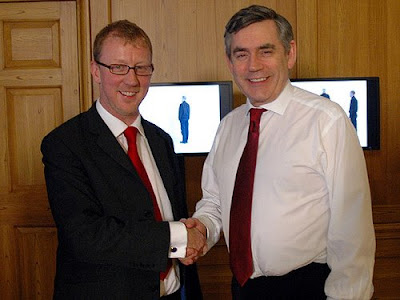 The idiot from the band Blur, David Alexander De Horne Rowntree, has attacked the BNP.

Yet another middle class Champagne Socialist 'rock star' arsehole with too many millions to spend who likes to pretend they are 'mockney' working for the working class.

Lets take a look at this Labour Toff ;

Rowntree was born to musical parents — Susan, a viola player, and John, a sound engineer at the British Broadcasting Corporation. He attended the Gilberd School, Colchester during the week, and the Landermere Music School, Earls Colne, at weekends, where he studied percussion. After leaving school he studied for a Higher National Diploma (HND) in Computer Science at Thames Polytechnic [1], and started his career as a computer programmer for Colchester Borough Council.

Rowntree has been a keen activist and supporter of the Labour Party since becoming a member in 2002, and is chair of London's West End branch. In April 2007 he unsuccessfully contested the safe Conservative seat of Marylebone High Street on Westminster City Council. In July 2008 he fought the safe Labour seat of Church Street, a Labour stronghold since its creation in the 1960s, but was again unsuccessful as the Conservatives gained the seat.

In February 2008 he was selected by the Cities of London and Westminster Constituency Labour Party to stand against Conservative MP Mark Field at the next general election.

Rowntree spoke out about the 2003 invasion of Iraq and in 2007 said, "I’m not a pacifist, I do believe that some things are worth fighting for, and dying for. I understand that that’s easier to say, I’m not being the one who’s asked to die, but Saddam was such an illegal ruthless bastard I didn’t shed any tears for it [the war]."[5]

Posted by Defender of Liberty at 06:24