The Times and the Reds 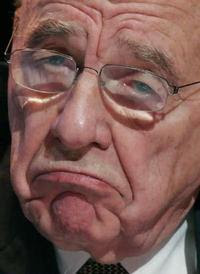 Not only did Nick Griffon suss you out, he used the money you tried to illegally donate to the BNP to support Solidarity legal cases to support persecuted nationalists.

Then, to cap it all, you go and give the BNP a front page story whilst the BNP website runs the facts and kills the story.

Brilliant. Thanks you grubby twats.

P.S. I just love the confirmation the entire corporatocracy and the corporate media despise the BNP.

Note the fact that the ONLY political party the entire Establishment are against are the BNP.

Proof indeed that we are the only real opposition party in the UK.

Hi Ho Hi Ho Its Off To Brussels We Go !

P.S Heres some info on Tony Blair and Rupert Murdoch.

The question is why does this American who is not even British have so much power over the media in the UK ?

The first thing we will do is ensure that media groups in the UK can only be owned by British citizens, as that way they can be held liable for the lies they print in their papers.

Note that Murdoch was informed by Blair about the Iraq War before it began, and before Parliament or the British people, so that Murdochs papers The Sun and Times could print lies in its pages to support Blairs plans for war.

It was The Sun and The Times that printed and propagandised the dodgy dossier with its bullshit about WMD and it was the corporate media that beat the drum for the Iraq War.

The Corporate Media are as guilty as the politicians that voted for the Iraq War for the war crimes committed during the Iraq War.

That is not a democracy, that is a conspiracy.

WE DEMAND A PUBLIC INQUIRY INTO THE ROLE OF THE MEDIA IN PROPAGANDISING AND SUPPORTING THE IRAQ WAR AND ALSO THE ROLE OF MURDOCH AND BLAIR IN PREPARING THE MEDIA FOR THE WAR.

Tony Blair's close relationship with Rupert Murdoch, and the reciprocated unprecedented support which he received from Murdoch's globally influential News Corporation media empire, has been the subject of much criticism.[89][90] In 1995 while leader of the Opposition, Blair disclosed in Commons register of interests that he was a guest of Murdoch when he flew to meet him in Hayman Island.[91]

A Cabinet Office freedom of information response, released the day after Blair handed over power to Gordon Brown, documents Blair having various official phone calls and meetings with Rupert Murdoch of News Corporation and Richard Desmond of Northern and Shell Media.[92]

The response includes contacts "clearly of an official nature" in the specified period, but excludes contacts "not clearly of an official nature."[93] No details were given of what subjects discussed. In the period between September 2002 and April 2005, Blair and Murdoch are documented speaking 6 times; three times in the 9 days before the Iraq war, including the eve of the 20 March US and UK invasion, and on 29 January, 25 April and 3 October 2004. Between January 2003 and February 2004, Mr Blair had three meetings with Richard Desmond; on 29 January and 3 September 2003 and 23 February 2004.[94][95]

The information was disclosed after a three and a half year battle by the Lib Dem Lord Avebury.[92] Lord Avebury's initial October 2003 information request was dismissed by then leader of the Lords, Baroness Amos.[92] A following complaint was rejected, with Downing Street claiming the information compromised free and frank discussions, while Cabinet Office claimed releasing the timing of the PM's contacts with individuals is undesirable, as it might lead to the content of the discussions being disclosed.[92] While awaiting a following appeal from Lord Avebury, the cabinet office announced that it would release the information. Lord Avebury said: "The public can now scrutinise the timing of his (Murdoch's) contacts with the former Prime Minister, to see whether they can be linked to events in the outside world."[92]

I thought Murdoch was from downunder.

He was, he is now an American citizen

Still makes him an Aussie in my book! :-)