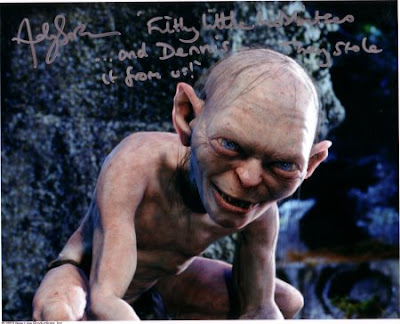 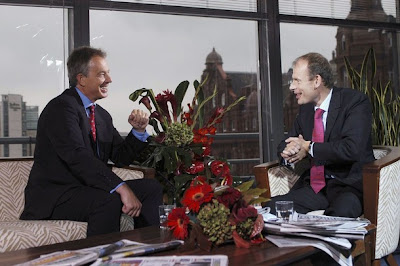 Image - Andrew Marr interviews the Butcher of Baghdad, the Murderer of the Serbs and the accomplice of KLA ethnic cleansing in Kosovo. " Yes my precious, I will make sure you keep the ring of power ".


It appears that Andrew Marr of the BBC,, one of the premier liberal fascists of the state media, attacked the BNP on his show this morning.

Here is a quote from Andrew Marr as stated in a brilliant article released by John Pilger a few days ago.

" The same was true of the lawless attack on Iraq in 2003, behind which the cross-party Establishment and the political media rallied.

Andrew Marr stood in Downing Street and excitedly told BBC viewers that Blair had “said they would be able to take Baghdad without a bloodbath, and that in the end the Iraqis would be celebrating. And on both of those points he has been proved conclusively right.” When Blair’s army finally retreated from Basra in May, it left behind, according to scholarly estimates, more than a million people dead, a majority of stricken, sick children, a contaminated water supply, a crippled energy grid and four million refugees.

As for the “celebrating” Iraqis, the vast majority, say Whitehall’s own surveys, want the invader out. And when Blair finally departed the House of Commons, MPs gave him a standing ovation – they who had refused to hold a vote on his criminal invasion or even to set up an inquiry into its lies, which almost three-quarters of the British population wanted.


Andrew Marr is a lickspittle of the Labour government and an apologist for genocide.

He and his media cronies beat the drums for the Iraq War and then sought to act as apologists for the total disaster it became.

To be abused and villified by scum such as Andrew Marr is our greatest validation.

When devils cast stones at you and call you a sinner, then you know you truly are one of the good.

Posted by Defender of Liberty at 04:51

You are excelling yourself lately Lee great stuff!

Re: Andrew Marr interviews the Butcher of Baghdad, the Murderer of the Serbs and the accomplice of KLA ethnic cleansing in Kosovo. " Yes my precious, I will make sure you keep the ring of power ".

Your article is right on target, Lee.

To comment any further would be somewhat superflous, very well done Lee.

Thanks for the name check, Lee! You know, I wouldn't have thought you'd consider me to be a credible source. You'll be in my prayers.