William Rees-Mogg - Has He Gone Senile ? 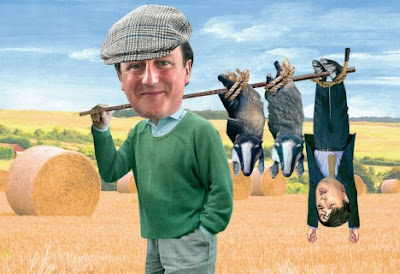 Image - David Cameron as an insane, badger killing nutcase who also has genocidal plans for his political opponents according to the senile old fart Lord William Rees-Mogg.

In the midst of the worst economic crisis in modern history, he writes an article in The Daily Mail stating that the issue which most concerns 'farmers in Somerset' is the evil spectre of badgers prowling the countryside and waylaying innocent cows.

I kid you not.


Along with this article about how much Somerset farmers are straining at the leash to exterminate badgers, he manages to bring in the BNP and puts up an image of David Cameron as an insane badger exterminating nutcase who also appears to be intent on murdering Nick Griffin.

Apparently Nick Griffin is just an animal that can be exterminated at will, just like the Nazis used to do to their political opponents.

William Rees-Mogg is a reactionary old fart who writes well but is simply another Corporate Media reactionary whore.

The fact that such people infest the media is evidence of how debased journalism has become.

Read the Muriel Gray article and the William Rees-Mogg article.

I can only feel ashamed that this is the level to which contemporary journalism has dropped.

We have imbedded journalists that broadcast edited film footage given to them by the military and call that journalism, we have propaganda disguised as journalism in every tabloid and now we have the senile dribblings of this incompetent old fool managing to get into the pages of the Daily Mail.

Frankly the sooner the entire corporate media collapse into bankruptcy, as The Daily Mail, The Independent and The Guardian are all about to do, then the better.

Arise Lord Rees-Mogg - no doubt David Cameron will give you a peerage for arse licking once he gets into power.

Posted by Defender of Liberty at 13:11

Cameron is a corporate entity, he's a brand... he is a fucking blunt tool used for a purpose, and that purpose being eradication of national identities, establishment of the EU superstate as a global entity... he is a puppet of his paymasters , the rich and fat controllers who pull his strings and he dances. The reason he hates the BNP is not ideological, it is practical... Cameron hates the BNP because it risks his status as the baggage man of the global elite. Cameron is dweeb.

Lord Rees-Mogg and James Dale Davidson have written what I consider to be 3 of the most enlightening books anywhere to be found, and in any generation: Blood in the Streets, The Great Reckoning, and the Sovereign Individual. These volumes are mind-blowing. I believe the author of this blog "doth protest too much" with all of the name calling. I read the article cited by Rees-Mogg. Nick Griffin isn't even mentioned, and overall it sounds like an insightful, if partial commentary.