The White Slaves of England 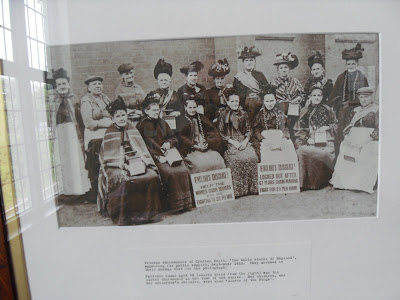 Image - A photograph of a photograph taken in the boardroom upstairs in the Working Mens Institute of the Black Country Museum. If you click on the image and read the text you will see the women wearing the chains of slavery around their neck.

This is a poem about the Cradley Heath chainmakers strike of 1910.

The White Slaves of England.

Each day is just another link in the chain,
Worn around the neck of the workers,
The dollied slaves of the iron forge,
The disposable property of the rich,
Whose servitude is founded,
Amidst the heat and spit of sparks,
And erected upon a lie of free trade,
Whose price is a starvation wage,
Or a workhouse for the dying,
Whose pale ghosts we pass in silence,
On our way to work in the pits,
For pity is the cross they are forced to bear,
As the true burden of our surrender,
Lungs coughing up the cost of progress,
Black coal dust in blood clots,
The red roses of the Industrial Revolution,
Which bloomed upon my fathers pillow.


The white slaves of England, were wives
Wedded not to husbands but the work,
Of profiting only the capitalists,
In the workshops of the Empire,
Where I played as a child, and laid
Asleep beneath my mothers bench,
Hearing in my dreams the heavy hammers,
Of the wage slaves with no liberty,
Founding the nets of prosperity,
For the rich that lived in luxury,
As sweaters walked the line,
Women in white petticoats and bustles,
Who had never forged a link,
In their lives and yet earned a good living,
Whipping with harsh words the old women,
Whose fingers were bent and broken,
From a lifetime of toil in the flames.

Was a word we had never heard before,
A word the Church saw as the serpent,
In the Garden where Adam slaved,
Under the dominion of Jehovah,
A word certain to rouse the ire,
And swiftly douse the fires,
Of the bosses and the furnaces,
Which defined the meaning of our lives,
A word that spread like a disease,
Or a flash of sudden wildfire,
Passed amidst the hovels and houses,
Of whispering workers, transforming
The long oppressed into heroes,
Determined now to make their stand,
On the day I heard them shout,
“ come out and stay out”, unity in action,
As the word awoke and the world turned over,
And mothers hammer slept upon her bench,
For ten weeks until the strike was won,
And Patience Round was invited in,
The oldest of the chain makers still at work,
To take the surrender of the bosses,
As the dawn of our New England begun.

Posted by Defender of Liberty at 11:49