The Church of England - history and crimes 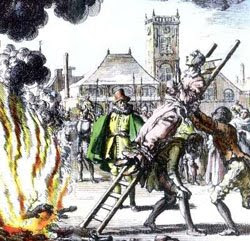 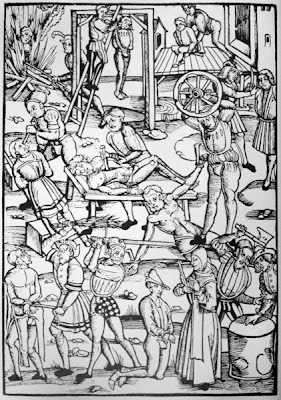 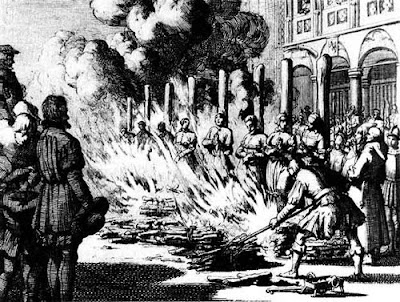 Today the Church of England is once again seeking to mix politics and religion.

The Church of England has burnt many thousands of people for heresy in its time, and what it has has done in the past it will do once again if circumstances demand.

Today the Church seeks to burn the reputation of those in the BNP in the bonfires of the press and seeks to use public opinion to attack the BNP and its members.

The question we have to ask then is what if the Church had real political power in the future in our country - would the leaders of the Church once again stoke the flames of real hate in the real world and our society and seek to cast the new heretics into their real bonfires.

Would we, those they regard as heretics, suffer again as our people once did in the past - those who the Church threw in the bonfires such as Witches, Pagans and heretics who did not agree with either the religious dogma or politics of the Church.

Off to the bonfires again would go all those like me who despise the new marxist liberalism of the Church and who study the Gnostic Gospels and indigenous heathen religions of the UK.

Thats why the Church of England should stay clear of politics because of the shame it should feel for its history of murder, violence, terror and burnings of heretics.

Only by showing true contrition, and staying out of politics forever, can the Church of England truly atone for its endless historical crimes.

The more the church seeks to re-engage with society on political issues, the more it demonstrates that it has not atoned for its sins of the past and that in fact it has become more of threat to society than ever.

If the Church cannot see that because of its past that it should not be involved in politics, then that threatens us all in the future.

The past always repeats itself.

I feel afraid when the Church seeks to re-politicise itself, as I have studied the terrible history of death, mayhem and murder that the Church has been involved in throughout history when it allowed its senior ranks and the church itself to mix religion and politics.

I have seen the Taliban do the same, and the Islamists, as both mix politics and religion - and I fear where the Church of England is going.

Todays touchy feely liberal Bishop who is allowed to mix religion and politics may pave the way to tomorrows new Witch Finder General.

The Burning Times must never be allowed to begin again.

First they use the BNP as a way to attack those they define as 'non-Christian' and tomorrow it will be pagans, witches, Druids and Wiccans and anyone else whose politics, opinions or ideas they do not like.

All of us have a duty to stand against the Fascists In Frocks, the Clerical Fascists of the Church of England.

The church of england has no moral authority anymore simply because of its evil past.

Therefore when it seeks to become involved in politics and moralising it must be resisted.

As usual Alan i bow to your superb historical knowledge, perhaps you could write an article dismissing the attack on the BNP and example of the church killing heretics and I will post it on this site.

E mail it to me at leejohnbarnes@googlemail.com and I will post it up.

I'll get to this asap

The crazed Marxists zealots who infest the upper echelons of the church are acting just like all crazed zealots have done. Just like the witch hunters and the inquisition. They care not one bit for truth, but its all about power and control and achieving their political dominance. The churchmen don't even know what the BNP stand for, and yet they blindly and hysterically rant and rave against the BNP.

I'd be very interested in what many of the Evangelical Christian Churches in the UK are saying about the BNP.

most of the black evangelical churches in the UK are disgusted with the church of england with its fixation with gay rights, pro-abortion and liberalism.

Thats why most of the black community in the UK are members of evangelical churches.

Where I live every sunday morning an evangelical black church rent a community hall and wow can they sing !

From around about 9 am to 3 pm its singing and preaching all the time.

A group from the EBC in Thornton Heath saved my wife from being mugged for the second time a couple of years ago, no prizes fro guessing who the muggers were.

I don't have a lot of information on the 'Middle England' evangelical churches as a whole but I think most avoid anything as controversial as the BNP.

Christian Voice is an exception. This group addresses various contentious issues these days, e.g. 'gay' rights, abortion, Islam etc. and has common ground with the Party in some respects. However, its national director, Stephen Green, hates the BNP like poison although as I recall, he hasn't said anything recently to this effect.

Pastor Dr. Alan Clifford of the Norwich Reformed Church shares the BNP's views on Islam but I think he eschews the Party as 'extreme, right-wing etc.'

I would guess the churches these individuals are associated with probably think as they do but I don't know.

In sum, as indicated, most evangelicals probably find the topic of the BNP a bit awkward and prefer to focus on 'sharing God's love etc.,' which is OK if they believe that's their calling.

What they don't realise (or don't appear to) is that their very freedom to evangelise as they do is under threat.

Which means they should at least perceive the Party as an ally but most seem to be pleading the 5th on the subject atm.

Re: the black church. I dare you to attend.

You are a wild one Lormarie !

I have no problem attending any church of any faith of any colour -its just I cant sing, cant dance and they get up and start too bloody early.

As an ex-Church of England member we just sit in a huge, old, cold, damp church whose roof leaks and is home to wood pigeons that crap on peoples heads during the service, that is dominated by a huge statue of Jesus suffering bloody torment on the Cross (designed to scare the kids) whilst some upper middle class bloke (potentially a pederast unfortunatly) mumbles at us for a couple of hours about nothing in particular, then collects the money and we clear off.

All that life, excitement, fun, joy and to be honest RELIGION, is not what we are used to.

Not all my dear.

Its not very C of E at all.

Men will never be free until the last king is strangled with the entrails of the last priest.
~ Denis Diderot

Here is a case from Brazil which demonstrates the irrationality of organised religion; oh and this was two weeks ago not 100 years ago.

A Brazilian archbishop says all those who helped a child rape victim secure an abortion are to be excommunicated from the Catholic Church.
The girl in question was nine years old and had been serially raped by her stepfather.

...doctors at the hospital said they had to take account of the welfare of the girl, and that she was so small that her uterus did not have the ability to contain one child let alone two.

The Catholic Church tried to intervene to prevent the abortion going ahead but the procedure was carried out on Wednesday. Now a Church spokesman says all those involved, including the child's mother and the doctors, are to be excommunicated. The Archbishop of Olinda and Recife, Jose Cardoso Sobrinho, told Brazil's TV Globo that the law of God was above any human law.

You are so right. Only right-wing churches should be able to mix politics and religion, promote witch-burnings, and so forth. It's disgusting when liberal churches attempt to preach messages of inclusion, caring for the downtrodden, and other Marxist causes. Nice job linking inclusive churches with right-wing radical islam, by the way.