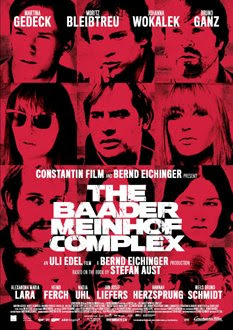 The German epic, Der Baader Meinhof Komplex, about the RAF (Red Army Faction) a militant leftist terrorist group who waged a low level terrorist campaign throughout the sixties and seventies, is an epic movie.

Depicting the Age of Red Terror, the sixties and seventies, the film details the formation, actions and the eventual downfall and demise of the RAF itself.

Following the story of its characters Ulrike Meinhof, Andreas Baader and Gudrun Ensslin, the film also charts world history and the how the narrative of terrorism is used both by terrorists and governments to define the evolution of society.

The primary impact politically of the RAF campaign was to give birth to the police state it said was immanent within German society.

The police state they created then used its powers to target, arrest and kill RAF members until the entire revolutionary process ends in the group suicide of its leadership in prison amidst a world drowning in a bloodbath of police and army shoot outs.

The revolution that begun in blood, ends in blood.

It is a fantastic film that reveals the utter futility of taking on militarily a police state that is prepared to use nuclear weapons in war. Any state whose military strategy is predicated upon MAD (mutually assured destruction eg the end of the world) is both psychotic and dangerous, therefore one cannot 'confront' such a state and expect it to crumble.

Fear is what police states feed upon.

The more fear then the more power the political pigs that run the police state have.

Terrorism is revolution in the absence of intelligent leadership or proper political stategy.

The deeds of the terrorist feed the growth of military-industrial bloc, empower the police, grant governments a license to kill and alienate the masses.


The only way to kill such a state is to eviscerate it from within.

Against the police state in a liberal fascist democracy one must use politics, art, culture, the law, protest and economics as part of a thousand peaceful fronts.

If there has to be revolutionary action, then such action must be based on undermining the moral foundation of the state and its position in society.

For this a community is required to represent the interests of the people in society and the political process, and it to this end, the creation of an alternative community not secretive cells of terrorists, that all revolutionary action must be directed, not in futile acts of violence that merely empower the police state and its pig politicians.

The film depicts the futility of revolutionary violence against a state that regards the individual police officer, soldier and politician as nothing more pawns to be played and lost as required in order solely to keep itself, and its political elite, in power.

The bullets that the RAF loaded into their guns were sold to them by capitalists.

The machine guns they used against the 'fascist state' were made in the Communist bloc by slave workers and prisoners in the gulags.

Trapped in the dark web of materialism, and its illusions, the RAF were unable to see that they themselves became the very fascists they thought they were fighting - targeting Jews on hijacked planes, training with Islamist terrorists dedicated to destroying Israel and endorsing the ideology of Communism that was slaughtering millions across the world in the gulags and laogai.

Capitalism and Communism, both Urizen in different guises, sets man against man in order to ensure the dominion of darkness.

The film is excellent to watch and I would recommend it as an adult film with action, great direction and brilliant acting.

The one character in the film that is of interest today is the lawyer of the RAF Horst Mahler, now rotting in a German prison for the 'crime' of expressing an opinion that the 'democracy of Germany' has criminalised.

His transition from an armed terrorist and lawyer working for the RAF to his present status as a radical neo-nationalist political prisoner imprisoned in the dungeons of democratic Germany, would make an fascinating story.

One wonders when the German people will ever be free to say what they think in their own homelands without fear of arrest, prosecution and imprisonment.

Whatever system seeks to silence the people, thereby places the people in tyranny's chains and transforms them from citizens into slaves.

One wonders whether the politicians will ever learn that the moment the state starts treating words as weapons, then real weapons swiftly replace words.

The Baader Minehof story is indeed very interesting. The late 60's radicalisation of students in France and Germany was a result of the coming of age of all the post war ideological changes in Europe. In Germany as a result of "De-Nazification " all Professors, teachers , opinion formers who were not sufficiently liberal/Marxist in their views had been sacked. In France a similar process had happened to all nationalist minded intellectuals. Indeed in France post war nationalist intellectuals and writers had been shot by the state. The student radicalisation was the result. Thus the student rebellion was only a further manifesation of post war changes and the Frankfurt school agenda. Of course all these students are now in government throughout Europe. The Frankfurt school has achieved its goal....how many years it will be in charge is difficult to say.