The New Swine Flu = The Tory Press attack the BNP 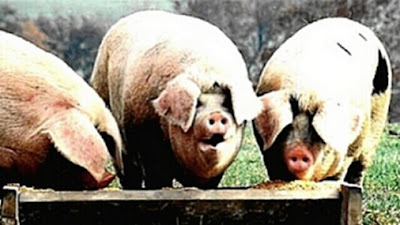 Image - " Dont worry chaps Nice But Dim and Baron Dickless will save us. Once the public schoolboy network of the Tory press gets to work then victory for us will be assured. The old school tie brigade will rally around and save us, harrumph, harrumph "

The latest variant of Swine Flu is the viral outbreak of a contagious video and inane website run by two tory toffs which has now begun to spread across the internet and media with the hypersonic speed of a spray of snot shot out by a sneeze.

See below how quickly the new Swine Flu has spread.

The Daily Mail and Telegraph have all come down with the new Swine Flu and blog after
blog has passed the porcine virus on to their fellow porcines.

You can smell the stench of fear and desperation in the articles as they know the Tory political pigs they support have been discovered gorging in the Houses of Troughminster along with the Labour Party.

The fake polls from the fake pollsters ( paid by the papers to manufacture polls for the benefit of their political puppets ) are just another propaganda weapon.

Like dogs sniffing at a piss stained lamp post, the entire tory press and its pack of neutered poodles have all been told to start barking at the BNP and to have a sniff and a dribble of their own at Tim ' Nice but Dim' Montgomery and Baron Dickless's website.


What a bunch of public school wankers.

P.S Nice But Dim and Baron Dickless heres a tip - the next time you make one of your shite videos ensure that the British flag in the video is fying the right way up.

Posted by Defender of Liberty at 07:59

That made me laugh Lee!