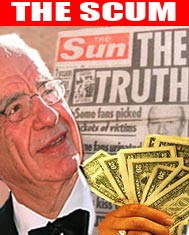 Over the years we in the BNP have been used to being lied about, smeared and abused in the media, but the article published today in The Sun newspaper is a new low.

The article alleging the BNP issued a leaflet insulting the Gurkhas and Corporal Pun, a dead Gurkha hero, is a complete fabrication and a complete lie. The leaflet is not a BNP leaflet, it was never printed, published, distributed either by the BNP or by Adam Walker.

The leaflet is a complete forgery. This is not the first time the Sun has lied in order to sell its paper.

The Sun once printed an disgusting article falsely alleging that Liverpool fans urinated on the dead in the Hillsborough disaster.

It took the Sun years to admit these allegations were false and to apologise to the people, the families and the city that they had slandered and insulted.

It appears that the Sun has now reverted to type and is once again engaged in the journalism of the gutter.

So far today we have managed to remove all articles that repeated the lies in The Sun article from the internet. The editors of those newspapers have a sense of moral and professional integrity and have understood that printing lies in order to interfere in the democratic political process is an abuse of the powers of the press.

The Sun it appears have rejected truth and morality for political opportunism.

But what is far worse than the insults against the BNP and Adam Walker is the complete and utterly cynical lack of care and regard for the family of Corporal Pun and his comrades who fought alongside him.

The forged leaflet printed in The Sun is not just racist in its content it insults the memory of a brave hero who died for our country.

We contacted the Sun newspaper editors office and legal office before 9 am today as soon as we saw the story. We asked that they remove the story not just because it was false but because it was racist towards the Gurkha community, it insulted the memory of a dead Gurkha hero and it was causing offence to untold numbers of people who read it in the paper and online.

Yet The Sun ignored our repeated requests to remove this vile leaflet from its online edition.

Instead the Sun chose to keep the article online and continue to cause immense offence to the family of Corporal Pun and British soldiers who may read the article.

We ask that you e mail the Sun newspaper here and demand that they remove the article from their online edition immediately.

The e mail addresses for the Sun are here ;

Posted by Defender of Liberty at 07:26

Oh yeah, the hurt feelings of the BNP really compare to the suffering of the the families of the Hillsborough victims

You've compared an article based on a BNP leaflet, to sick lies printed about a tragedy where nearly 100 innocent people.

You are rightfully free to express your opinion, but please find a better example to compare it to.

Ha Ha! There's nothing quite like right-wing bullshit to give me a laugh.

Ah, the sun! A newspaper that if you wiped your arse with it, it would leave more than it removed!
Another new low for the scum..

PLEASE add the Press Complaints Commission to your emails:

This needs to be added to the list on the BNP article too. We did it before with the PCC, and got headlines out of it.. we need to do it again!

Lee it looks like your getting a few of Gerrie's friends reading your blog or are they just employees of Searchlight...tax payer funded of course.
Actually the most disgusting of the lot are Murdoch,Brown, Blair, and Gerrie's mates who are sending off British soldiers to die in Afghanistan for no purpose , certainly not in Britains interest.
Lets keep e mailing them at the Sun, must irritate the jobsworth in the editorial office having to open them,

Why would you care? The Sun features stories about all walks of life, including Black and Asian people. This obviously shouldn't interest you, because you are a racist cunt. Then again, you can't buy any newspaper. They all feature similar stories. Look on the back pages, photos of Drogba and Ronaldo, both foreign to the UK, but both put more into making people happy than you cunts do.

Thanks to those scumbag losers over at Lancaster UAF (Undergraduates Against Freedom) I've found this blog.

Its fantastic - really feels like a breath of fresh air to read someone saying what most people in this country are actually thinking.

Don't be disheartened by the barrage of smears from the biased left-wing media - it only goes to show just how much they are shitting themselves at the prospect of a BNP surge on June 4th.

I was going to vote UKIP in the Euro elections but having thought about it in recent weeks, I've realised that the single most defiant act of civil disobedience I could carry out would be to vote BNP. So, that is exactly what I intend to do.

"The Sun features stories about all walks of life, including Black and Asian people"

"Look on the back pages, photos of Drogba and Ronaldo ... "

Fuck me!
I've seen the light!
The sun does stories and pictures of blacks and asians!
I must stop being so waysist and start hating myself for being white!
My dick has shrivelled already and my arsehole has prolapsed!
Oh joy!

What a pathetic bunch of losers these leftists are. They haven't a clue what they are going on about, but as soon as they hear anything about the BNP they start foaming at the mouth and calling everyone a cunt.

Leftists = mentally ill self loathers who need to believe the lies about the BNP so that they can justify their own self-hatred.

For anyone interested in the truth and not the demented rantings of these idiot leftists then visit the BNP website: