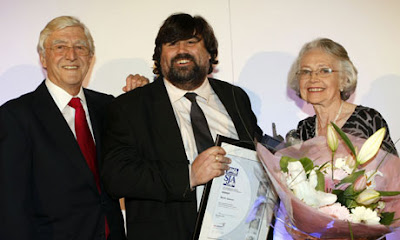 Image - Martin Samuel is the fat useless arsehole in the middle of the picture winning 'The fat smug arsehole of the year award'.

I had never heard of Martin Samuel before.

Then I read the article below as I was doing a bit of surfing.

I noted at first that he looked like an obese version of Kenny Rogers.

Then I read the article.

Now I know the man is a total fucking arsehole.

Here is what he wrote in the article ;

" Leaving aside the fact that if a shoeless Somalian asylum seeker with no English can do what you do, it probably isn't worth doing and you really should have paid more attention in school, how can this be? Similarly, if you have skill and a real talent, how can you be replaced by a Romanian squeegee woman?

There is no queue of heart specialists outside University College London hospital, bemoaning the fact that the Poles have come in and replaced all the best surgeons on the cheap. For that matter, there isn't an angry mob of bank tellers in the High Street, either. And try to get a good British plumber or skilled carpenter at short notice... "

1) The state education system for the white working class has totally failed. Whilst fat boy samuel can send his spolit brat kids to a private school, working class parents have to send their kids to state schools run by the Labour government and NUT lefty nutters using trendy teaching methods that concentrate on teaching 5 year olds how to put on a condom but not how to read and write.

Therefore when white working class kids fail at school, which is almost an inevitability, then Samuel says ' ah fuck'em, they deserve to be on the dole forever because they didnt learn at school. If somalians take the low skilled jobs that were once available for them then tough shit. "

It is British children he is talking about.

What about children with learning difficulties, with ADD and ADHD, with medical problems and who have other difficulties that impact on their educational abilities. According to Samuel the fact they failed at school means they should just rot in the gutters whilst immigrants step over them on their way to take British jobs at the job centre.

2) He appears to think mocking the white working class poor, those with learning difficulties and those who have experienced events that have impacted upon their education in a detrimental manner is funny.

The fact is that the low skills jobs that were once available to the white working class in the British economy were often the first steps on the ladder for them. They started at the bottom and then they slowly moved up the ladder. Now with the ladder taken away they just stay in the gutter whilst immigrants are allowed to move up the politically correct ladder instead.

I used to work with a Downs Syndrome lad who used to do manual work on a building site. There are no jobs now for lads like him, because an employer can hire an immigrant who works without taxes for cheaper wages.

People like fat boy samuel, whose job as a journalist talking shit in the Daily Mail will never be replaced by a somalian who cannot speak English, are the arseholes that have acted as apologists for the abandonment of the working class and those who were once able to get low skills jobs by the globalists and businesses that employ illegal labour.

Martin Samuels you are an apologist for those scum.

3) As for the statement about surgeons not being angry about poles taking their jobs, one wonders what arsehole fat boy samuels has been hiding in.

Whilst we get foreign doctors that specialise in killing British patients because they cannot even read English properly or we get African nurses with AID's who the NHS then have to spend all their AID'S budget on treating instead of treating AID's patients, we leave our own British medical graduates unemployed.

Whilst the best of British nurses and surgical teams ship off out to Canada because they are unable to get the jobs in the UK or are sick of what Britain is becoming the NHS are employing fucking idiots like Dr. Daniel Ubani a 'German' doctor who killed a British patient.

Whilst thousands of unemployed British doctors and nurses remain unemployed or emigrate the NHS pillages the Third World for cheap doctors and AIDS' infected nurses to bring into the UK so as 'multi-culturalise' the NHS.

Yet fat boy thinks this is great.

Lets hope that one day fat boy has a heart attack and has to be treated in an NHS emergency ward by another Doctor Ubani.


4) Perhaps samuels, living as he does up his own arsehole, has not seen how many bank tellers have been made unemployed over recent months because of the credit crunch. I have. My mates wife is now an unemployed bank teller laid off by a nationalised bank.

Perhaps samuels hasnt noticed, as I have as so many of my mates are now unemployed, how many skilled trades jobs from scaffolders to plumbers have been dumped on the dole or forced to take a three day week.

My cousin has two kids and had a mortgage with Northern Rock.

On the same day he got a letter from Northern Rock putting his mortgage up £400 a month he was told at work that he could either do a three day week or be laid off.

He is being evicted next week.

He and his wife and kids have nowhere to go.

He has worked as a scaffolder all his life, paid his mortgage and then when the banks went tits up the entire system took a shit on him.

Martin Samuels you are a know nothing, big mouthed, fat useless Daily Mail cunt and the day I ever bump into you then you had better run fucking fast fat boy.

There is a line and you just stepped over it.

Posted by Defender of Liberty at 00:40

He's always been a fat lardy tosser Lee. He used to be the sports writer at the Screws and he was as out of it with football as he clearly is with reality in the UK.

If you do see him, you may also want to remind him what "Asian" doctors tried to do to innocent Brits in the summer of 2007. Before you smack the ignorant fat twat of course.

And the story about your cousin says it all. Greeedy bankers line their own pockets, screw up the economy, get bailed out by taxpayers and then show no mercy to the people whose money kept them afloat. I for one hope the BNP shows these bastards the same when our time comes, what dispicable filth they are.

You've summed it up perfectly, Lee. Journalists like Mr Samuel have no morals or beliefs, they mearly repeat the same shit that every other idiot in the press is saying.Their "jack" attitude sums up their selfish and cowardly existance.

This Samuel character has been given his own colum in the Daily Mail which suddenly appeared about a month ago, I thought it odd at the time because he is a sports reporter (an average on at that) so imagine my surprise when I came across his musings.

After reading his 'observations' regarding the BNP what can I say? The BNP are not aiming at getting his kinds vote anyway, it's greedy, traitorous, self-seeking bastards like him who will be got rid of.

His comment which stated it is the fault of 'thick, working class kids' for having to compete with the cheap immigrant labour because they should have worked harder in scholl just about sums up his and his ilks attitude to the British people.

"trendy teaching methods that concentrate on teaching 5 year olds how to put on a condom but not how to read and write."

Martin...I am a 63yr old proud Briton of West African Descent.I have followed your write-ups on 'Plastic Britons'. You see,I am a fan of everything sportish. I am extremely pleased that the Olympics are being in our beloved London.
So,I am a bit taken aback with your incessant write-ups on above topics.As I am an avid reader of the Mail and with hope that you are a balanced observer of sporting issues,I would then ask you to comment in the Daily Mail,what name we will give the very capable and admireable ZIMBABWE LADY WHO WON US THE WINBLODON LADIES' TENNIS TITLE IN 1972.I would also like to know what you will like to call the numerous capable cricketing stars of yesteryears and of current times who represented(and still representing and in many cases,captaining) England, but are all South Africans.What would YOU want to call the South African LADY WHO REPRESENTED GREAT BRITAIN IN THE OLYMPICS IN THE 80s?
I know of rugby players from far and wide who have represented the home nations with flying colours,whose roots are not originally from this Great Nation.
We also have many dedicated youngsters in football who were born abroad and who gave their all playing for this beloved Nation..one of the recent examples,was born in Canada and qualified to play for Germany.
We also know of a personable young man raised in the USA who did us proud in the throwing events.These are but a few examples along the years.WHAT NAMES WOULD THEY BE CALLED? Or is the name'Plastic Britons' reserved for particular type of sports people? Martin as an honourable sports journalist kindly reply to my humble question in the sports pages of the excellent DAILY MAIL.