The CofE - Money changers in the Temple 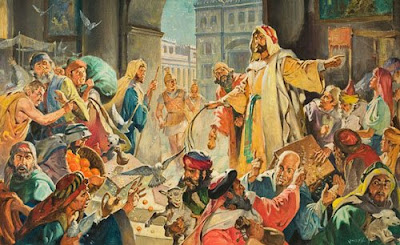 10 And when he was come into Jerusalem, all the city was moved, saying, Who is this?

11 And the multitude said, This is Jesus the prophet of Nazareth of Galilee.

13 And said unto them, It is written, My house shall be called the house of prayer; but ye have made it a den of thieves.

The Church of England is a vile organisation, infested with pederasts who are protected by Bishops and priests from prosecution and riddled with Marxists who worship Che Guevara instead of Jesus Christ and Marx instead God.

Its priests pontificate from their pulpits and issue moral decrees about who we should vote for, whilst they try and hide beneath the hems of their pretty frocks the myriad dead bodies of those the Church has slaughtered throughout its history from Catholics, Jews, Pagans, Witches to Scientists and those who were against the Kings they served.

The Church of England can never atone for its vile crimes.

The ghosts of those it murderd during its bloody reign still haunt our world. But today they are forgotten by the priests and leaders of the Church.

Today the Church seeks to move once again into politics thereby showing that it has learnt nothing from its history or that it has atoned for its crimes.

Because of its crimes in the past the Chrch of England must never again be allowed to be involved in politics.

The danger is too great to allow any Church or religion dominate our secular society.

The church of england is no longer a church, it is marxist cult. It is no longer English, as it no longer represents the interests of England and it is no longer a Church for the English people as it fills it ranks and pews with the immigrants that fill its coffers with cash.

Denis Diderot wrote that “Men will never be free until the last king is strangled with the entrails of the last priest”.

Today he needs to add to the list 'the last priest and the last media baron'.

The fact that the Church of England is now virtually bankrupt because it poured its money into the money markets is a delicious irony.

The fact that the money the Church accumulated from its theological blackmail (give us your money and obey us or you will go to hell) has now been lost in the money market crash is an almost Bibilical act of justice.

Those that lay down with the money lenders are corrupted by them.

When I see the massive churches across this country built with money donated from the poorest of our people, it makes me sad.

I know that whilst the poorest of our people lived in total poverty and penury when these churches were being built, the money they gave the Church could have been spent on their children, food for their families, medicine for the sick or for decent homes and to build a fairer society.

Instead all that money went on building churches and palaces and supporting a class of parasites in frocks who lived in total luxury and dined with Kings whilst the people lived in fear, hunger and misery in simple hovels.

When I see a massive Cathedral I see a crime set in stone, not a place of prayer where God or Christ can be experienced.

I imagine how the vast amounts of money used to build those vast buildings could have been spent on helping the poor.

When I visit a church I look at the graves, not the church and note the age of the people buried there and reflect on the lives they had - whilst the Church took their tithes and left them in poverty, whilst the priests waved them off to war and then stayed in their palaces and the Church passed the collection plate about and took money from the mouthes of poor families and children.

Jesus Christ would never have wanted vast cathedrals, palaces and churches built in his name or a class of parasites in frocks wearing gold chains and jewel adorned crucifixes whose opulent lifestyles in their opulent palaces are sustained by donations from the poor faithful - he would have wanted all that money collected by the Church spent on the poor, the sick and the hungry.

He would never have wanted a religion or churches built in his name that threw people into bonfires, hacked them with swords or who damned them to hell for ignoring the demands of Kings and Bishops.

Jesus Christ loved the people, he would have despised the Church.

Finally the false religion that slandered the name of Jesus Christ is about to fall from its own greed and inner corruption.

The new religion of Christos that will replace the insane cult of Marx and Jehovah will be a religion of love and spirit, not pomp, power and wealth.

Every penny of the New Church Novalis will be spent not on erecting monuments to the power of the Church and the vanity of its underlings, but on helping the weak, the poor, the sick, the hungry and the disspossessed.

That is the true example set by Jesus Christ.

Young clergy face life on the dole after Church of England loses £1.3billion

Last updated at 1:02 AM on 31st May 2009
Comments (15) Add to My Stories
No jobs: The Church is turning away graduates of theological colleges

The Church of England is turning away trainee clergy for the first time in history after £1.3billion of its investments were wiped out in the financial crisis.
Up to a dozen graduates of theological colleges will miss out on their ordination next month and may end up on the dole as there are no parish jobs for them.
The Church has previously given all graduates placements in parishes as curates, which they need before they can become ordained as priests.

But now, to the anger of senior clerics, a spending squeeze means the number of junior clergy posts has been reduced and some trainees may quit the Church.
The unprecedented situation comes after the Church Commissioners, who manage the Church’s £5.7billion assets, announced it lost £1.3billion last year as share and property holdings plunged.

One college principal, the Rev Richard Turnbull, of Oxford’s Wycliffe Hall, called the jobs crisis a ‘tragedy and a travesty’ and said he and colleagues would protest strongly to bishops.

He said: ‘The Church of England agrees these individuals are called to the priesthood.

'It agrees that they have been fully and successfully trained. It says they are ready for ordination as priests. Then it just walks away.’

Mr Turnbull added the Church had already spent about £30,000 training each single student and at least £60,000 for married students on three-year residential courses. Those unplaced may be left unemployed while they wait to see if other jobs come up.
He warned: ‘At the moment they are very distressed. They are still confident in God but they are losing confidence in the Church.’

The Commissioners provide about a sixth of the Church’s annual running costs of just over £1billion – mainly for clergy salaries and pensions and the upkeep of buildings. But they now warn they may not be able to maintain their levels of contribution for much longer.

Meanwhile, the 44 dioceses must pay millions extra in clergy pension bills this year under new rules. And it is feared worshippers’ donations – a large proportion of the Church’s annual income – may not meet the shortfall.

An official Church report in January into the effects of the downturn urged wealthy parishioners to put more into the collection plate.

The report by Andrew Britton, chairman of the finance committee of the Archbishops’ Council, said: ‘The current crisis will have a serious and lasting effect in parishes, dioceses and national institutions.’

Mr Turnbull said at least 11 graduates had not been placed this year, and several others were believed to have already taken non-clergy jobs.

He added nearly all the unplaced students had trained at three evangelical colleges – his own, Oak Hill in London and Trinity in Bristol. And he suggested they had not been offered parish jobs because many bishops did not approve of their conservative, Bible-based views.

A Church spokesman said most students had found jobs, and attempts to find places were continuing.

But he added: ‘Dioceses must decide how many clergy they

Posted by Defender of Liberty at 01:56

"Seek me not in churches of wood and stone. Hew the wood and there find me. Move the rock and I am there."
- Jesus the Gnostic

The Lord will cleanse His temple soon, Malachi 3:1-6, doctrinally to Israel, devotionally to the individual Christian, the temple of the Holy Ghost, 3rd Person of the Godhead, 1 Corinthians 3:16, and also to the apostate Laodicean Church, the church of the 'Civil Rights,' as popularised by Michael King, better known via his illegal alias as Martin Luther King.