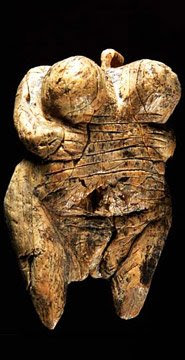 Note the comments at the end of the article below stating that this beautiful art is representative of a change in the cognitive abilities of Cro-Magnons in Europe.

This development is the increase of Mirror Neurones in the brains of Cro-Magnons and hence is still present in the modern European racial group.

This mammoth ivory carving from 35,000 years ago may be the oldest know example of figurative art


A piece of Prehistoric pornography carved from mammoth ivory at least 35,000 years ago may be the oldest known example of figurative art.

The Venus of Hohle Fels takes her name from the cave in southern Germany where she was unearthed last year.

Nicholas Conrad, of the University of Tübingen, told the journal Nature that there could be little question of the carver’s intent. “There can be no doubt that the depiction of oversized breasts, accentuated buttocks and genitalia results from the deliberate exaggeration of the sexual features of the figurine.”

Paul Mellars, of the University of Cambridge, wrote in a commentary for Nature: “The figure is explicitly — and blatantly — that of a woman, with an exaggeration of sexual characteristics, large, projecting breasts, a greatly enlarged and explicit vulva, and bloated belly and thighs, that by 21st-century standards could be seen as bordering on the pornographic.”

He added: “It is clear that the sexually symbolic dimension in European, and indeed worldwide, art has a long ancestry in the evolution of our species.”

While abstract designs carved into pieces of ochre are known from at least 75,000 years ago in Africa, Dr Conrad said: “This figurine was produced at least 35,000 calendar years ago, making it one of the oldest known examples of figurative art.”

The Venus has radically changed archaeologists’ views of the context and meaning of the earliest Palaeolithic, or Stone Age, art, he added.

The figure is at least 5,000 years older than similar figurines found in the same part of Germany. Dr Mellars said that the sexual imagery was consistent with other carvings made at a similar time, such as depictions of the vulva scratched on rocks in western France and phallic symbols made out of bone.

The figure is headless and a ring placed where the head would be suggets that it was worn as a pendant.The ivory has been discoloured a reddish brown over thousands of years.

Dr Mellars said that the discovery shed important new light on the art and belief systems of the Aurignacian period, during which Homo sapiens spread through Europe.

Aurignacian art generally features animals or figures that are half-human and half-animal. Representations of a duck-like bird, a horse’s head and a human body with the head of a lion were found in Hohle Fels cave in 2003 and dated to about 30,000 years ago. Dr Conrad said that the Venus challenged previous views that “strong aggressive animals or shamanistic depictions dominate the Aurignacian art of Swabia, or even of Europe as a whole”.

Dr Mellars said that the discovery added to the evidence that “fully representational, figurative art seems at present to be a European phenomenon, without any documented parallels in Africa or elsewhere earlier than about 30,000 years ago”.

This, he said, could potentially be linked to the evolution of the modern human brain.

“How far this ‘symbolic explosion’ associated with the origins and dispersal of our species reflects a major, mutation-driven reorganisation in the cognitive capacities of the human brain — perhaps associated with a similar leap forward in the complexity of language, remains a fascinating and contentious issue.”