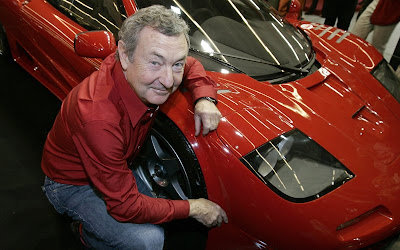 
The very fact that Nick Mason of Pink Floyd has over 1.5 million pounds to spend on a single car whilst British families are going homeless, British workers are losing their jobs and British workers wages are being cut is obscene.

This fat, middle class parasite who gained his wealth from sitting on his fat arse banging sticks on a cymbal is evidence of the utter depravity of contemporary British society.

Now they are banding together to defend the Labour Party that impoverished the poor and enriched the rich.

The basic wage for a fully qualified Staff Nurse (RN) in the UK with 3 years University training is £20,225.

Yet this fat fucking useless prick sits on his fat arse and makes millions per year on royalty payments alone.

You can either continue to subsidise the disgusting lifestyle of this fat idiot by buying Pink Floyd albums or you can not buy them at all in the first place.

The choice, as always, is yours.

Though personally I must say that I hate Billy Bragg the ultimate mockney as he is a totally shit singer, I despise Blur who are a bunch of whining pussys who wrote mockney songs whilst in reality were all middle class mummys boys and I still think Pink Floyd are crap as their music is now just ancient middle class shite for middle class tossers who like their music like themselves - ancient, boring and outdated.


All in all, Pink Floyd became just another brick in the Establishments wall, a fake plastic icon of rebellion and hard rock nostalgia for the sweet paralysed.

As Richey Edwards wrote in the song Nostalgic Pushead ;

They dig the new scene and their parties
Where stonehenge is worshipped and drugs a deity
Vicarious thrills re-run their youth
We follow we have no voice the dead
Radio nostalgia is radio death
I wanna cover diamonds on my wife
Hardrock nostalgia the Stones on CD
Tranquilised icons for the sweet paralysed.

Posted by Defender of Liberty at 06:40

Any guess as to the current net worth of the Manic Street Preachers, Lee?

As I have pointed out many times before the only reason I liked the Manics was because of Richey Edwards.

He is now dead.

Therefore the Manics are now just another bunch of hypocritical rich rock star tossers who are simply a panto act.

The big money and record industry killed it.

For me it isn't about the money it is the fact that most rock/pop stars spout socialist/multicultural platitudes which they do not live by.

They are hypocrites who want to deny others the very things they claim for themselves. It isn't just restricted to musicians either but it's funny that as soon as these people make decent wedge they become more capitalist than socialist.

Their hypocrisy was perfectly demonstrated by John Lennon, the working class hero who fucked off from Liverpool first chance he got and sang "Imagine no possessions" whilst owning a customised rolls royce. And the masses fall for it time after time. It is truly pathetic.

At least they work for a living, Lee. Unlike yourself.

Only a complete prat would call writing songs and recording them as work.

They are over paid idle idiots who are bastions of the consumerist system who profit from spasms of activity that benfit only themselves and not society, they do not 'work'.

The taxes they pay on their income is the only benefit they give society - but the very fact that they accrue such wealth for writing such drivel and doing so little is evidence of the corrupt nature of society and the system itself.

The idea that being a rock star is work is absurd.

It is a lifestyle choice - not work.

Then why don't you get a job?

what a LOSER you must be, I have a hint for you... before you go try to get a job... brush your teeth you limey C U N T piece of S H I T.
I hope you DIE of AIDS... you fucking jealous worthless A-HOLE.

The real looser is who is not able to make his/her point without insulting the other person.

I agree with all aspects of your article other than insulting the music itself which is timeless and will continue to be forever. Music today is shit, I'd really like to know what garbage you listen to.

Sadly you article bites of jealously rather than substance.. I get they are you are educated but sadly you may lack talent. Rather then wasting your time spewing venom about those who have succeeded, you should focus on what attributes they have. Then you can mimic those attributes and give your voice some credence. As for now, well, it is small..

Ok. Why the fuck would you blame Nick Mason, one of the members of Pink Floyd, for starving middle class Britain... he made his money from the middle class, he did something great, everyone loved the music.

Don't put the economic blame on him. He's entitled to buy whatever he wants with his money. You don't just blame people for all of society's problems cause they have more money/ are more fortunate. There are plenty more people to blame for the crisis. Assholes.