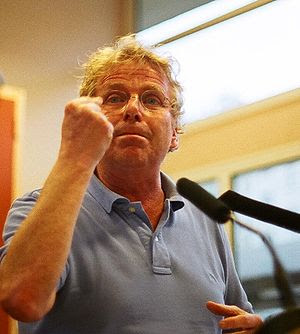 Image - Daniel Cohn Bendit, Green MEP, pederast and hero of Lancaster Unity, The Labour Party and Searchlight. This pervert needs to be strung up from a lamp post.

The horror at the dark heart of a sordid, arrogant parliament

Here we are, a few words about Brussels and how it feels about child abuse. I’ll move onto the elections for the European parliament in a moment, but given the horrors of the Ryan report last week, I thought that you ought to know how seriously the euro-elite treat any suggestion of improper behaviour by adults towards children.

In other words I give you Daniel Cohn Bendit, an MEP for the German Green Party. He is a self-confessed kiddie-fiddler, but pulling down his trouser zip for tiny children hasn’t stopped him becoming one of the most influential members of parliament. Here is his story. Keep in mind this man has more power over the legislation of this country than does any member of the Dail.

Mr Cohn-Bendit is better known as Dany the red of the 1968 Paris Barricades. He is a kind of mid-century leftover leftie who was active in squatting, street fighting and agitation before he re-invented himself as a Green and was elected to the European parliament. Last month I went to watch him in a debate with Declan Ganley. The thing was standing-room only in a ballroom in a Brussels hotel.

Mr Ganley produced a book Cohn-Bendit wrote in 1975. He read out Mr Cohn-Bendit`s account of how he had worked in a kindergarten and allowed the children to pull down the zip on his trousers and touch him intimately. In the book he had asked them why they wanted to play with him and not with each other, but in the end he ‘caressed’, his word- them too.

Mr Cohn-Bendit disputed none of it. Indeed when Mr Ganley finished reading, the former kindergarten teacher whooped that he had just won €500 because he had bet someone that Mr Ganley would read out that bit of his auto-biography. When Mr Cohn-Bendit’s supporters in the room did not give him quite give the sound of applause he seemed to be looking for with that reply, he changed tack and insisted that everything in the book had been discussed in Germany and France years ago and the parents of the children had never raised any concerns. Mr Ganley asked: ‘And the children, what did they say?’ Dany the Red assured him and the audience that years later the children had all said their time at the school was extremely happy. And then he went on about how attitudes were different in the 1970s.

And if none of those excuses sounds familiar to you - in particular, the excuse about how attitudes were different in the 1970s - then you weren’t paying attention last week.

But let me give you another example of how ’seriously’ the euro-elite take the protection of children. You may remember the Marc Dutroux case in Belgium. It could be called the most horrific example of child rape and murder in Europe since the war.

Known as the beast of Belgium, Dutroux is now serving a life sentence for a series of child kidnappings, rapes and murders in 1995-96. He kept some of his victims locked in a dungeon he had built in his basement. Two eight-year-old girls starved to death there after Dutroux was arrested and served a short prison sentence for car theft: his wife didn’t bother to open the dungeon door to feed the girls.

Part of the great mystery and scandal that accompanied the case was the relentless incompetence of the authorities, at that time led by the Justice Minister, Melchior Wathelet. For years, as victims were kidnapped and murdered, police files were full of reports and tip-offs that Dutroux was selling young girls. Yet Dutroux stayed free. In the end Mr Wathelet was forced to resign in disgrace. And his reward for incompetence in the administration of Justice was - to be appointed a judge at the European Court of Justice.

That would be like our chief executive of the Financial Regulator, Patrick Neary, being appointed head of NAMA. Which would be a joke. But having anyone involved in any way with the horrors of the bungled Dutroux investigation appointed to one of Europe’s most senior judicial positions is no joke. It is, however, a good measure of the arrogance of the euro-elite towards what might be called the plain people of Europe.

But still back to the elections of the European parliament. And that also takes us back to the arrogance of the euro-elite. Just in case it had slipped past you, the voters of Europe are supposed to be voting to determine the membership of the next European parliament which, under existing European law, that is to say, the Nice Treaty, will have 736 seats. But the euro-elites are manoeuvring to make the voters elect 754 MEPs - that is, to elect an extra 18 politicians to the lushly-paid parliament, even though these politicians will have no seat to fill. The euro-elite want the 18 to have full salary, full tax-free allowance for every day they turn up at the European parliament building, full expenses, business-class travel allowances and all the rest. The 18 will be given everything except a job.

The excuse given? That the Lisbon Treaty allows for the creation of an extra 18 seats. So even though the treaty is not yet ratified, the 18 extra politicians ought to be elected and paid as MEPs until the Lisbon Treaty comes into force. Note that arrogance: the treaty has not yet been ratified, and indeed,
may yet come totally off the rails if Gordon Brown is forced to call a general election in the Britain. It may never become law. Yet the euro-elite intends to ignore that fact. They expect the European voters, sheep that we are all assumed to be (and given the docility of the Irish in accepting a second referendum yet again, we have certainly proved to be sheep) to ‘baaaa-baaaa’ their way into the polling booths and deliver 754 MEPs for 736 seats.

The extra 18 are supposed to act as observers until the Lisbon Treaty comes into force, and then they will take their newly-created seats. But for technical reasons the earliest that could possibly happen is two years after the European elections. So we will have 18 politicians pouring money into their bank accounts for at least two years in return for doing no work at all as MEPs. Remember: any member of the European parliament who plays all the angles can bank €1m over the five-year term of a parliament. This euro-wheeze makes the scandal of British MPs’ expenses look like nothing worse than pilfering Biros from the stationery cupboard.

It can be a useful wheeze to us, though. It can remind us of how the idea that we - any of us, any of the voters of Europe - have ever had democratic power over Lisbon Treaty is a lie. The French and Dutch voters rejected the text when it was called the European Constitution, the Irish voters rejected the text when it was called Lisbon. The 27 member states have not finished with ratification. And yet the euro-elite have been proceeding for years as though the treaty were already law. And in their minds, of course, it is law: for European law is whatever the euro-elite say it is. Like Dutroux with the young girls, they do not consider that ‘NO’ is an available answer.

I will remind you of just a few examples of how the euro-elite have been for years seizing important new powers which were supposed to theirs only after the treaty was made law by the member states. There is the European Space Policy (which is now developing military use for the European Gallileo GPS system),the European Defence Agency, the borders agency called Frontex, and the European Union Agency for Fundamental Rights. Each of these institutions was meant to be created only after the ratification of the European Constitution. When that collapsed, and even before it was re-packaged as the Lisbon Treaty, the euro-elite used legal trickery to start constructing these new institutions anyway.

The "Greens" are a pathetic movement. They don't really stand for anything, they are just a disparate bunch of political desperadoes desperate to get on the gravy train. Anyone who wants the easiest piece of EU money announces how perfect and globally sensitive they are by standing for the "Greens" - it's the ultimate "I'm a nice guy act"... thus why it appeals to pederasts, being as charm and manipulation are their forte, and yet the reality is anything other than what they project.

Are you sure, is this asshole a pedophile? How come I never read anything about this? Where does this information come from?

He wrote about it in one of his own books.

Google his name and the facts are available.

He admits to doing it !

Thats you Green Party for you, a haven for pederasts and kiddy fiddlers.