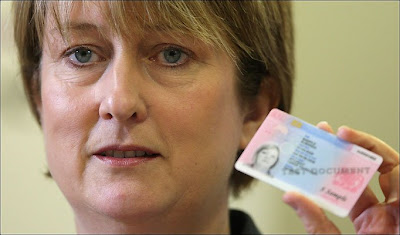 Image - Be afraid, be very afraid as I control the police and courts. Democracy is mine, Mine, MINE !


Whilst hundreds of thousands of illegal immigrants, bogus asylum seekers and economic migrants slip into the country every year in the back of lorries, the utter incompetent idiot Jacqui Smith announces with a fanfare that she has barred 16 people from entering the UK.

If she could stop the flood of illegals into the country we might be impressed, as it is this just makes her look an insane, menopausal idiot.

Note her comments in the article below ;

"I think it's important that people understand the sorts of values and sorts of standards that we have here, the fact that it's a privilege to come and the sort of things that mean you won't be welcome in this country," Ms Smith told GMTV.

"We are publishing the names of 16 of those that we have excluded since October. We are telling people who they are and why it is we don't want them in this country."

Heres a few points about those comments ;

No government in history has done more to undermine British values than this Labour government.

It was a privelige to come to Britain at one time, now its a 'right' able to be abused by every scum bag on the planet who can mutter like Aladdin once muttered Ala Kazzam the magic word 'Asylum' .

Coming from a government that have allowed Islamists to invade and colonise our nation,the only people that do feel 'welcome' in the UK are now immigrants and aliens, not the indigenous British people who feel like strangers in their own homeland.

The idea that Jackboot Jacqui and her government of scum could, should or should ever be given the power to decide the 'rules' that we live by would be the total of destruction of our entire society - a job they have already done so well since taking power.

Talk of 'values' from this money grabbing harlot is like listening to a whore talk about the need for family values in society.

If we all lived to the 'standards' of this sick government we would be living in Soddom and Gomorrah not Britain.

We dont want you in our country you money grabbing, fascist freak - now resign and let us have an election where the idiot masses can vote in the idiot tories and we can watch as our country sinks further down the toilet under the dominion of the media and their moronic media puppets.

Posted by Defender of Liberty at 04:16

Another standard piece of hypocrisy:

Inayat Bunglawala, of the Muslim Council of Britain, told BBC Radio 5 Live that people should be free to enter the country, regardless of their views.

"If they step over the line and break the law, it's at that moment the law should be enacted, not beforehand.

"If people are keeping their odious views to themselves, that's their business. We should not be in the business of policing people's minds."I don't recall the Muslim Council of Britain making such statements in defence of Geert Wilders!

What proves these people are insane is how they can so completely contradict themselves from one moment to the next.