Jack Straw and Mugabe - Not Griffin 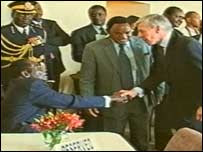 The pompous arrogance, vicious bullying and hubris of the panellists is sickening.

Note that Jack Straw will shake hands with murderers and tyrants like the racist Robert Mugabe but not an elected MEP British politician like Nick Grffin.

Jack Straw is a total arse.

On his way into the Question Time studios, a BBC staffer approached Jack Straw and told him they wanted to make this show as normal as possible.

“There is no chance of that,” replied the Justice Secretary as he prepared for a night when he and other panellists would first snub, then recoil from physical contact with, Nick Griffin.

The panellists, who usually mingle before the show in the Green Room, were given separate dressing rooms. Mr Griffin said that he was treated “very decently” and given a bowl of fruit. His aide, Simon Darby, nervously ate his way through an entire box of Roses chocolates.

When one of Mr Straw’s team went to the toilet, a policeman advised: “I wouldn’t do that, sir, you might find something unpleasant.” The BNP leader, accompanied by two minders, had entered seconds earlier.

Only as the panellists lined up in the corridor preparing to go into the auditorium itself did interaction become possible. Mr Straw and Chris Huhne, the Liberal Democrat Home Affairs spokesman, were soon chatting. Mr Griffin edged over towards them, perhaps hoping that his imminent arrival on the national stage would mean that he would be treated by other politicians as a member of the club.

“I could see him out of the corner of my eye,” Mr Straw said. “We just moved closer together and made it very clear he would not be welcome to join us. Normally, I will shake hands with anybody. But not him.”

Mr Griffin said: “There was no human contact between them and me at all. It was very, very clear they weren’t going to recognise me as a human being. I’m sure they’d like to put me in a concentration camp.”

Bonnie Greer and Baroness Warsi, the Tory communities spokeswoman, also did their best to blank the BNP leader. “Sayeeda [Warsi] came rushing up to check I was OK with having to sit next to him,” Ms Greer said. “She was appalled.”

Once seated on the stage, Mr Griffin repeatedly tried to engage the American-born playwright in conversation. “He was trying to vibrate towards me, I was trying to edge away from him,” she said. “He was like some creepy guy who bothers you in the pub. If I’d had a pint, I would have poured it over his head.”

The usual ice-breaker question from David Dimbleby was replaced by a simple soundcheck, asking what each panellist had for breakfast. “Bacon and eggs,” Mr Griffin said.

And then they were off. The other panellists later expressed surprise that the BNP leader, who had been billed as such a formidable and clever opponent, should have been so bad.

Lady Warsi said: “A lot of his behaviour — the physical behaviour — didn’t come out on the television. He was very nervous. His hands were shaking, he was perspiring. He came across as slightly unhinged in the studio.”

Ms Greer said: “He seemed desperately insecure. He was like the new nerd in the class. You know, the one who you later find out killed all the frogs in the laboratory and put those anonymous notes in people’s lockers.”

At the end, Mr Straw swiftly went into the audience to find a woman who had objected to being called “Afro-Caribbean”, and received a hug.

There was no prospect of the panellists joining Mr Dimbleby for the standard Question Time dinner. “I don’t think any one of us wanted to break bread with that guy,” Ms Greer said.

The BNP leader, however, did seek again to strike up a relationship with Ms Greer. “You need some education,” she told him. “Come see me at the British Museum and I’ll give you some books.” The BNP leader then handed her his business card, which she is now considering putting up for sale on eBay.

According to his account yesterday, they agreed to swap reading lists. “Our acquaintance is obviously very brief,” Mr Griffin said. “But she’s a smart and charming lady. We may well meet up at the British Museum.”

The other panellists, he complained, had “demonised me”. For the second time this week, he offered sarcastic gratitude to the BBC. “Thank you, Auntie,” said Mr Griffin, “for misreading the situation so catastrophically.”

Mr Straw denied that there had been collaboration between the other panellists to make Mr Griffin look stupid. “What it showed is that there is something basically decent running through Britain and British politics from UKIP to the Socialist Workers Party. But he is beyond the pale on that.”

While Mr Straw conceded that he had “never done a gig quite like this”, he suggested that Mr Griffin had failed to understand that “even in normal circumstances Question Time is a bit of a bearpit”. “I know he is whingeing about his treatment today. But my advice, as someone who has been around the block a bit, is this: if you can’t stand the heat, get out of the kitchen."

Fall of the West.


Alex Jones, Fall of the Republic

As you said, job done. Now that the gloves are off and the game is on, it must be approaching the juncture to put up a man who will not smile, who will not try to be sociable, preferably with a regional accent, to represent our anger and determination, loud & clear!

What vile vile people no wonder Nick was nervous, HATS OFF TO HIM. Who had all the manners then!! That bonnie woman waS THE WORST who the hell is she to act as if shes so superior.I wonder if that baroness would have been so full of herself and so nasty if she had been the one wwho was being ostracised. Ill say it again what vile people....well done Nick.

Of course, people with all their biases will lap up the bile these guys are continuing to pour out -- neutrals however are wondering who the bigots really are... the nastiness of it can't be denied.

Re: "But my advice, as someone who has been around the block a bit, is this: if you can’t stand the heat, get out of the kitchen."
"

Then if JS declines Nick's invitation to a public one-to-one debate on the issues of the day, he is a coward and a hypocrite.

If BG is going to auction off Nick's business card after extending him an invitation, she is likewise a hypocrite.

It is very clear to me, after watching the show several times, that the most dangerous person in that studio was Greer. A complete b**** as can be deduced from her patronising comments, the way she held her back to Nick throughout, and her constant interruptions at key moments in that debate when Nick was building up to the knockout punches. You know what, that was the most fascinating political discussion ever the more I watch it the deeper it gets and it was kinda Biblical in the sense that there is this tremendous depth, you know like when people sayu a picture is worth a thousand words well that show said it all about British politics and the media, it said everything. Wow, just wow. And it is for reasons like this I believe in God because things do get exposed and made clear and these are the big moments in life.