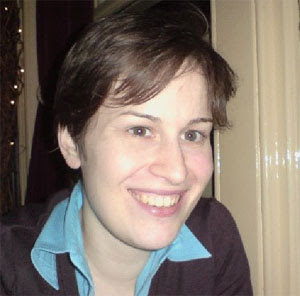 Image - Another Middle Class Liberal Lesbian in the QT audience. With a name like Bethany Mellington-Pritchrd we all know she is one of those super posh, middle class, Feminazi, lesbian types that think all men are rapists .


Last night, one of the most effective voices to come out of the audience on Question Time was that of Beth Mellington-Pritchard.

A lesbian in a civil partnership, she countered BNP leader Nick Griffin's assertation that homosexuality was repulsive, saying: "The feeling of revulsion is mutual." Mellington-Pritchard, who was seated with her partner, received cheers and clapping for her comment while Griffin smiled and laughed.

Here, she explains to PinkNews.co.uk why she heckled the BNP leader. "As a democratically elected MEP, I felt it was necessary for Mr Griffin to be invited to appear on Question Time and I was pleased that the BBC recognised this. I was even more pleased to be invited to be part of the audience and to have the opportunity to scrutinise Mr Griffin's odious opinions.

Prior to broadcast the audience waited in a room together for an hour and I have rarely seen such a diverse group of people.


Some people have criticised the BBC for selecting a biased audience, but there was an array of opinions and backgrounds. Indeed, there were also a number of BNP supporters and whilst we waited for the recording to begin they plotted amongst themselves how they should split themselves around the studio to make it appear that Mr Griffin appealed to a broad range of people.

I found the behaviour of the BNP audience members particularly sinister and my discomfort intensified when they cheered Mr Griffin's entrance to the stage. I believe that it was their cheering for Mr Griffin which led to the widely reported subsequent jeering and booing by some other people. .

Posted by Defender of Liberty at 12:42

These scum hate anyone that is normal, and being as the BNP are staunch advocates of normalcy they hate the BNP.

However, their hate is really the projection of their massive self-loathing; thus to deny the reality of their self-hate they fixate their all consuming self-hate-energy upon that which is contrary to their mental sickness.

I.e. They are mentally ill scum - they know they are fucked up - they then set about denying and repressing their self-hatred - however this energy cannot be contained - therefore to vent their immense self-hatred they externalise this energy onto that which exists in opposition to their condition. They hate the BNP because really they hate themselves for being fucked up.

This is the same process for all self-loathing tosser types.

I have rarely seen such a diverse group of people.

what does she think of homosexuals being attacked on an increasing basis by Muslims in Holland ad other places in Europe?

I know people who are homosexual and support and vote BNP

Slightly OT but the programme started off with comments by the old gangsters to the effect that British politics had no room for being organised along the lines of race.

Suppose the BMEs decided to form:

1. A Black Peoples' Political Party and/or

2. An Asian Peoples' Political Party and/or

And to exclude anyone they wanted to on the grounds of race.

Would the CEHR react in any way and if so how?

It's a hypothetical question, I know but I doubt if we'd see even the ghost of a potential court case.

If only this Deluded Feminazi could realise that her thoughts are not her own, she has been manipulated into 'diversity' as a way of destroying Western Society.

A little digging will reveal that the Entirety of Western Civilisation is being undermined from Christianity, Morals, Discipline, drink and drugs to the use of Feminism to destroy the family unit.
And The Bankers are in the thick of it as usual.

Note the difference in the QT audience where the BBC attempt to Portray Britain as a happy go lucky Multi Culti paradise, and shows like Jeremy Kyle, shows that are part of a campaign of Psychological warfare aimed at demoralising and destroying us as a society.
Look at street wars, road wars, big brother, the incessant squabbling and anti family scenarios portrayed in programmes like Corrie and Eastenders.

The repated images of Indigenous Brits drunk on a Saturday night.

All designed to create the very image in our collective minds about ourselves.
These shows do not reflect our society, they are creating it and it is very very deliberate.
The BBC is a truly evil Subversive organisation.

absolutely Adrian P your are right , it is a fact and furthermore if one really look sat TV fodder per see one can see these messages almost subliminal at times...and the print media to are at it constantly