The IRA and Catholic Church 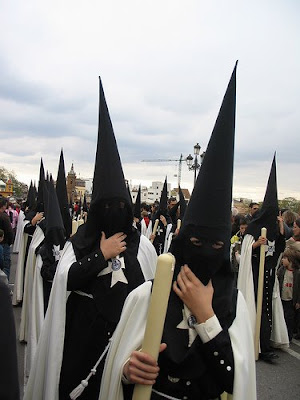 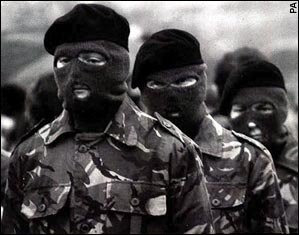 The confession by the Catholic Church in Ireland that it was a satanic cabal of degenerate paedophiles raping and abusing tens of thousands of children for generation after generation reveals much about the nature of Ireland - and in particular the IRA.

The IRA were an organisation run by twisted psychotic bastards.

The viciousness of the IRA is legendary.

The undercover SAS officer Robert Nairac was so badly tortured by an IRA interrogation squad that he was scalped, disembowelled and his remains put through a mincer and used as dog food.

They were afraid that if his body was discovered, and the full extent of the sadistic injuries inflicted upon him revealed, then the public and their supporters would be disgusted at them.


So they destroyed all trace of his body but before he died even sent in someone dressed in fake preist robes to try and trick him into confessing his 'crime' of not being a real supporter of the IRA.

But what sort of inner sickness drives men to do such things to another human being.

I suspect that much of the sickness in members of the IRA was as a result of years of sexual abuse by Catholic priests in schools and institutions run by the Church.

The extent of the abuse of children by priests was beyond belief.

It can only be described as satanic.

Using the fear of eternal damnation and execommunication these vile, animal priests terrorised children into silence as they raped, abused and violated them.

In order for the IRA to exist as a mob of murderous animals they had to have experienced something that turned them into animals.

Today the catholic church seeks to moralise about the BNP, whilst its sins are legion.

You can read about them in your local press when the latest idiot in a frock pontificates to the public about their moral duty to society, whilst they all conspire to keep the criminals hidden in their own ranks.

The black spiders of sin in the church even today are still spinning their satanics web of perversion and terror across the world, and in Ireland were able to control an entire country and political system.

The victims were isolated, ignored and persecuted.

The network of the priests controlled the entire country and ensured the truth was hidden.

The IRA and SinnFein control vast swathes of the communities and participate in the political process of both Northern and Southern Ireland whilst the catholic church still dominates Irish society.

BOTH HAVE THE BASIS OF THEIR POWER AND SUPPORT TERROR - ONE POLITICAL THE OTHER THEOLOGICAL.

The IRA terrorise society, the catholic church terrorise the individual.

The criminals are still protected by the church and the Social Establishments in both Northern and Southern Ireland.

Until there is justice for the victims of these crimes by the catholic church, then the crimes will continue - just in a different guise.

DUBLIN (AFP) — Sexual abuse was "endemic" in boys' homes in Ireland and church leaders turned a blind eye to it, according to a report Wednesday on mistreatment in church-run institutions dating back to the 1930s.

The head of the Catholic church in Ireland said he was "profoundly sorry" after publication of the 2,500-page report, which said there was a "culture of silence" among authorities about abuse in the state-funded homes.

"Children lived with the daily terror of not knowing where the next beating was coming from," said the report, the result of a nine-year probe. "A climate of fear... permeated most of the institutions and all those run for boys."

The largest-ever probe into Irish religious orders found abusers could "operate undetected for long periods at the core of institutions," while victims were sometimes blamed as having been corrupted and "punished severely."

It added: "Sexual abuse by members of religious orders was seldom brought to the attention of the Department of Education by religious authorities because of a culture of silence about the issue."

Since 2000, the government-appointed Commission to Inquire into Child Abuse has been probing allegations of sexual and physical abuse in reform schools, workhouses, orphanages, children's homes and other childcare institutions.

Compensation has been sought by Irish people now living in more than 30 countries, with 40 percent of claims from women.

Some victims of abuse dismissed the report, which did not to name the perpetrators and is unlikely to lead to any prosecutions.

"There is nothing by way of justice in any means significant in this report, nothing," said John Kelly of the Survivors of Child Abuse (SOCA) group, adding that survivors felt "deceived and cheated."

But one of the main campaigners on behalf of abuse victims, Christine Buckley, said it would "hopefully close another chapter in the hard lives of survivors."

"I earnestly hope that the recommendations made in this report will safeguard children in care at present and in the future," she said.

Reacting to the report, Irish Catholic church head Cardinal Sean Brady said: "I am profoundly sorry and deeply ashamed that children suffered in such awful ways in these institutions."

"The Catholic Church remains determined to do all that is necessary to make the church a safe, life-giving and joyful place for children," added Brady, who is Archbishop of Armagh and Primate of All Ireland.

Diarmuid Martin, the Archbishop of Dublin, said the findings were "stomach-churning".

Education Minister Batt O'Keeffe vowed to learn from the past, saying: "Child abuse is an abhorrent, inexcusable act whenever and wherever it occurs."

He added: "We must fully face up to the fact that wrong was done and we must learn from the mistakes of the past."

A spokesman for the Christian Brothers, one of the main groups criticised in the report, apologised to the victims.

Brother Edmund Garvey told RTE state radio they "unreservedly express our heartfelt sorrow and sadness and regret for what those people who were victimised in those institutions, in any way whatsoever, suffered in the past".

Mainly Catholic Ireland has been rocked by recurring revelations of clerical sex abuse of children. Many of the victims had reported the abuse when they were children but were not believed.

Campaigns by victims and a series of television documentaries and police inquiries in the 1990s led to the creation of the commission.

In 1999, then prime minister Bertie Ahern made an unprecedented apology to the victims for Ireland's "collective failure to intervene, to detect their pain, to come to their rescue."

Many of the children ended up in the institutions as a result of family break-up, the death of one parent, because they were illegitimate or after being caught for truancy from school or petty crimes.

Posted by Defender of Liberty at 15:04

"The IRA were an organisation run by twisted psychotic bastards."

Which would you rather be; the pot or the kettle?

The members of the IRA where (are) much like these lefties, don't care about truth, by are rather driven by their own psychologically disorders and simply latch onto a cause as a means to legitmise their psychosis.

Pagey_B said... "Which would you rather be; the pot or the kettle?"Says the person who clearly stated how she would have killed my grandfather if she had been a Nazi in WWII...

Er, whose fucked up?

"The confession by the Catholic Church in Ireland that it was a satanic cabal of degenerate paedophiles raping and abusing tens of thousands of children for generation after generation reveals much about the nature of Ireland - and in particular the IRA."

I don't understand how you can post sensationalist matters like this and still consider yourself objective. It's scaremongering bullshit.

But I think you need to understand that simply calling your perspective "truth" doesn't make it so.

What has struck me in the last few days Lee is that the lefties who post here all seem to be pig ignorant , arrogant and have marked personality disorders. Is it a result of late 20th century education? They seem to resort to the c word and f word which demonstrates the poverty of their vocabulary.

I didn't say kill your grandfather. I said kill AND rape. Don't leave then necrophilia part out of my rant - it was the best bit!

I'm merely stating a fact that many people reading this would agree with; it simply would have been much better if you'd never been born.

It is good this has at last come out in the media.

Bible believers have known about it for a long time and like Jack Chick, have sought to warn about Rome at large.

Martin Luther said, "If there is a hell, Rome is built over it."I trust this matter is not forgotten.

Catholics are obsessed with sex, if it is not their clergy fiddling with boys, it is in making sex dirty/encouraging sexual repression.

It strikes me that, alright not all Catholic girls adopt 'slaggy' behaviour, but isn't it funny how Madonna and Lady Ga Ga to name but two of the most popular popstars, are also two of the biggest slags in the business?

I will leave the words of Pagey_B unanswered as she has managed to say everything that reveals the liberal-fascists for what they are! This is too easy.

Jewbay (the compulsive eBayer) said: "I don't understand how you can post sensationalist matters like this and still consider yourself objective. It's scaremongering bullshit."Classic... and yet he doesn't consider any of the bullshit in the papers about the BNP as scaremongering bullshit, even though it is proven to be untrue... LOL... keep believing true believer.

Classic. This is fun, like shooting fish in an barrel. No wonder lefties don't ever want to debate with us, it's so freakin' easy for us to win.

"Classic... and yet he doesn't consider any of the bullshit in the papers about the BNP as scaremongering bullshit, even though it is proven to be untrue... LOL... keep believing true believer.

Classic. This is fun, like shooting fish in an barrel. No wonder lefties don't ever want to debate with us, it's so freakin' easy for us to win."

You want to debate with me? Great. Find some factual sources for any claims that the BNP make (by factual, I mean products of research institutions, and not political parties). At the moment you have speculation, not fact, supporting your politics.